BBC Weather: ‘Not a drop for vast majority’ as Matt Taylor warns dry heat in charge of UK

BBC Weather forecaster Matt Taylor predicted temperatures ranging from between 12 degrees and 24C as we head into the weekend. The North and West are predicted to have small outbreaks of rain, whilst the South and East won’t see a drop. Mr Taylor predicted sunnier conditions in Southern parts of the country. Rural areas can expect a cold night as temperatures dip back down as we head into the evening and overnight.

Mr Taylor said: “We’ll start with the rainfall forecast for the next few days, this just shows how rainfall totals will tot up across the UK.

“And as you can see it’s to the north and to the west where we’re most likely to see some rain.

“At times to the south and east, nothing, not a drop for the vast majority.

“That actually extends around five to ten days, and the main reason is in the short term. 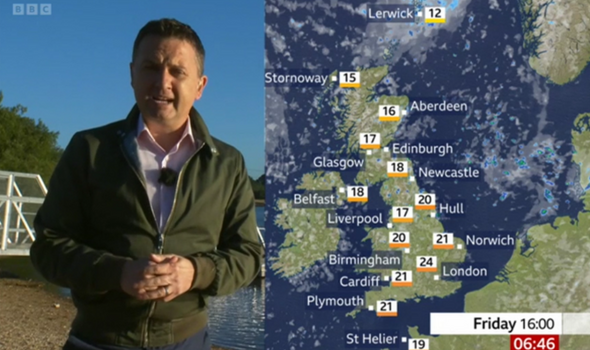 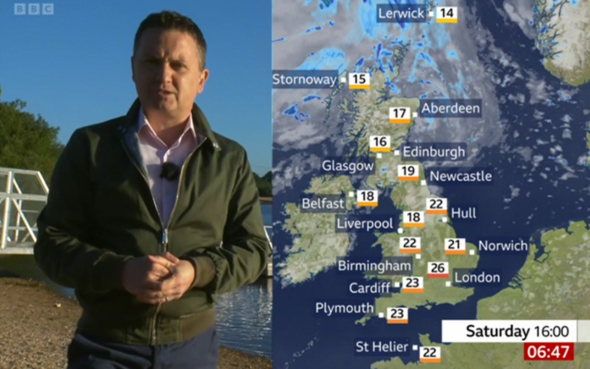 Mr Taylor added: “There’s an area of high pressure across the Atlantic that builds back in again, that keeps things dry.

“Just around the top edge, we will see some rain at times still in parts of the North and West of Scotland especially.

“And even today there are one or two showers dotted around, particularly across Scotland and Northern Ireland and to the far North of England.

“We could see one or two drift a bit further South throughout today, even as far South as East Anglia but very few in number.

BBC weather: Dry weather for many with scattered showers

Mr Taylor said: “Many will stay dry, wetter spots will be across Shetland and across Southern counties in England and Wales again, it will be a very sunny one.

“Temperatures though down compared to what we’ve been used to as of late, actually a little bit lower than the July average.

“Most places in the high teens, South East corner maybe up to 23C to 24C through this afternoon.

“Now into this evening and overnight most of the shower clouds will fade away, and most places will become dry but we will see more clouds drift in across the far North and West of Scotland, again bringing some outbreaks of rain here. 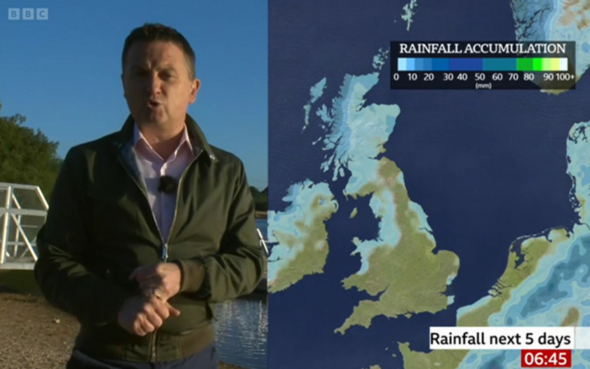 Mr Taylor added: “What you will notice tonight though, probably the coolest night we’ve had in a long-time.

“Temperatures quite widely in rural areas will be down into single figures to start your Saturday morning.

“Quite a fresh start to Saturday for the residual heat there in the house, open up the windows and doors and let some of that fresh air in.

“It’s going to be another pleasant day for the vast majority in terms of sunshine.”