Thunderstorms and torrential rain will dominate European weather over the next day, before temperatures begin to climb, according to the latest BBC forecast. Temperatures across south-east Europe, including Greece, Turkey and Italy, are already above 30C. However, the rest of Europe is still struggling with “below average” temperatures for the time of year.

“This will spread rain and strong winds into western areas of Europe as we go through the next 24 hours or so.

“There will be plenty of showers affecting southern and Eastern Europe as well.

“On Monday, some of the strongest winds will be going into western and central France.” 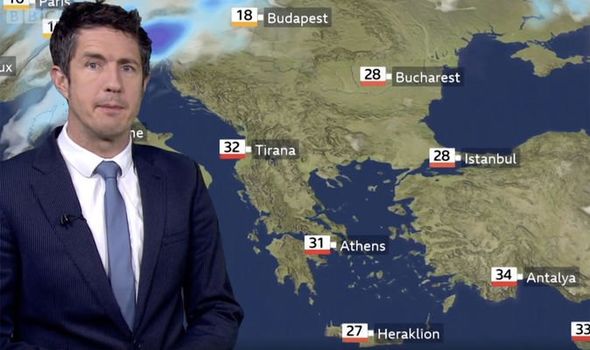 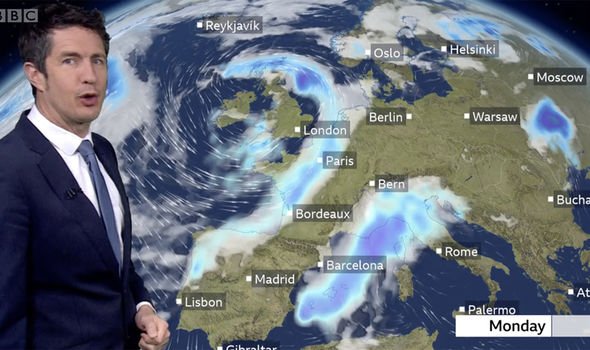 He continued: “As the main band of rain clears through, sunshine, showers and thunderstorms will follow.

“For the south-east Europe we have reasonable weather.

“For Turkey, for Greece, and into Albania, as well as southern and some central areas of Italy, it will be dry with some sunshine.

“There is a bit of patchy cloud for Spain and Portugal, particularly across north-western areas with some isolated showers.

BBC Weather: Wet and windy conditions to sweep across UK 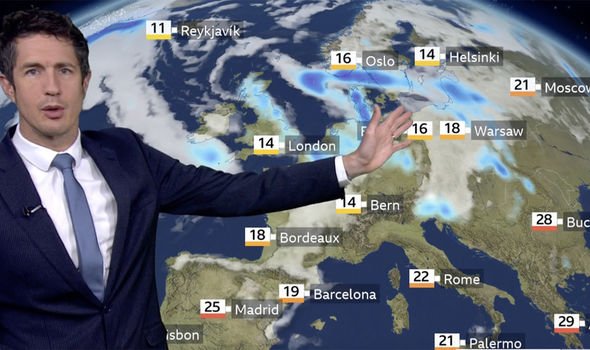 “For most of Europe, temperatures will be running below the average for this time of year.

“That rain, showers, and thunderstorms will continue to push into central and Eastern Europe on Tuesday.

“Temperatures continue to struggle. There are highs of just 16C in Berlin.” 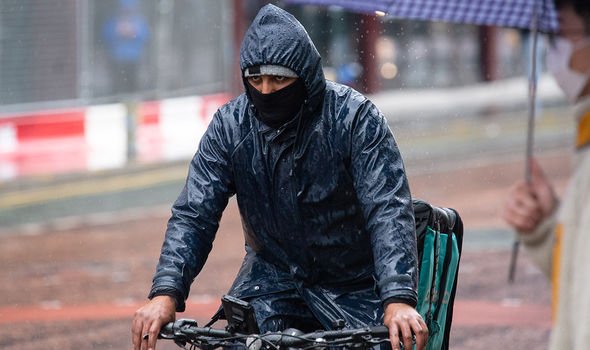 Mr Fawkes added: “However, over the next few days we should see the rain easing away from Paris and temperatures rebuild to 23C by Friday.”

He pointed out that Athens will hit 32C by Thursday while Madrid will reach 30C temperatures by next Saturday as a European heatwave emerges.

Meanwhile, the severe weather in the UK will continue to hit the country until next weekend when temperatures are expected to rise to 20C, according to the Met Office.

The UK has been battered by storms this week, with gale force winds of up to 85mph causing havoc, along with heavy rain.