BBC Weather has forecast temperatures will spike in the second half of the week due to an “unusual” build-up of warmth across Iberia and France. BBC Weather forecaster Matt Taylor warned the southwest of England, Cornwall, Devon and South Wales will have to suffer through a deluge of water before weather turns. Mr Taylor said: “We’ve got a weather system bringing some pretty wet and windy weather at the moment across the south and west of the country.

Great Big Lockdown Survey: Tell us what life’s like for you by answering THESE questions!

Create your own survey at doopoll.co

“Most places sitting under high pressure, dry, the odd patch of mist and fog.

“But here, we’ve got the weather front, cloud, outbreaks of rain and some strong and gusty winds. Those winds could cause some issues in the next few hours across parts of Devon, Cornwall, southwest Wales with 50mph, maybe 55mph.

“Heavy rain at the moment coming and going in the Channel Islands, Devon and Cornwall, just sliding into the south of Wales and other southern counties over the coming hours too, maybe as far east as the Isle of White and west Sussex.

“But it will just fizzle out as we go through the day. Away from that, it’s a sunny day ahead with slight winds the further north you go and it will feel very pleasant in that sunshine. 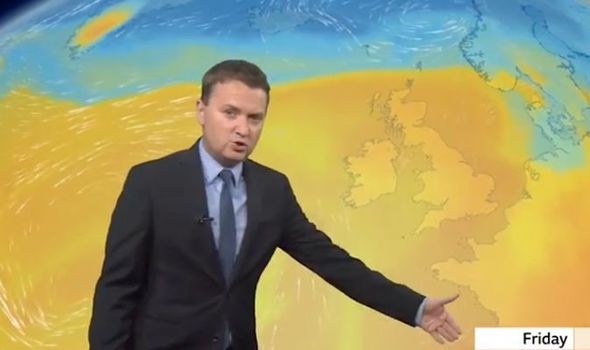 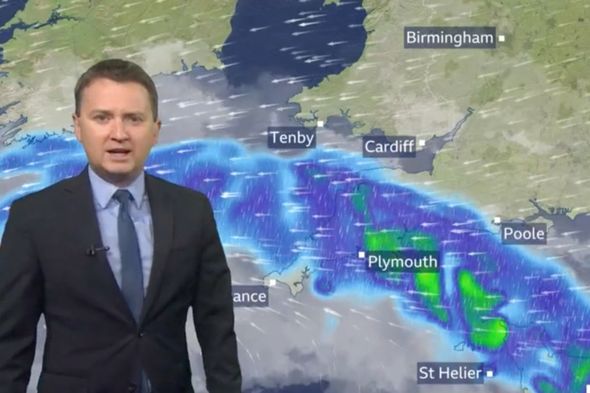 “To western parts of Scotland, northwest England could hit around 17C or 18C. But also with the breeze, cooler eastern coasts and, compared with yesterday, southern parts of England and Wales are a few degrees down.”

Temperatures will return to single figures overnight, with some areas waking up to a touch of frost on Wednesday morning.

But thermometers will begin to rise during the day as a wave of warmth moves in from the continent.

The BBC Weather forecaster continued: “The cloud from that weather front still around in the southwest through tonight, one or two showers possible for Cornwall in particular. 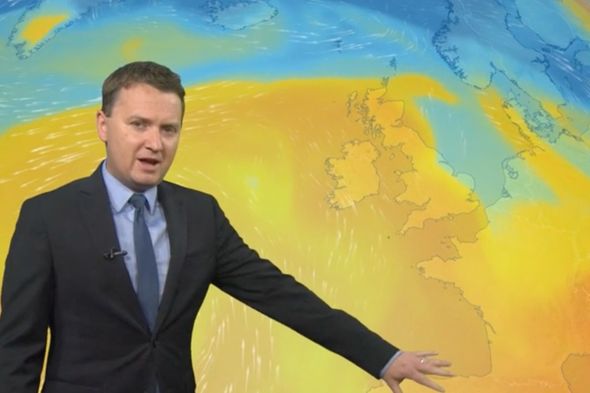 “Most have been drying out, a bit more cloud through Shetland and Orkney. But in between, with a clear sky, a touch of frost around into a rather cool start to Wednesday morning.

“It will be a cool start but we’ve seen the warmth build across Iberia and France for the past few days.”

Mr Taylor added: “Unusual warmth, in fact, and some of that will be wafting our way as we go through the second half of the week.

“Still a few showers down towards the far southwest drifting through into Ireland. 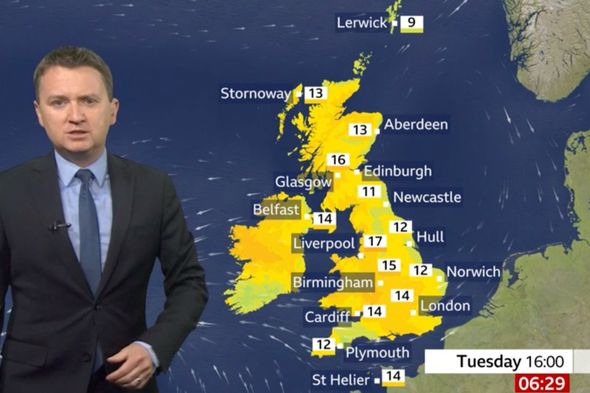 “A bit of cloud across parts of the north of Scotland but most of Wednesday we’ll have a dry and sunny and warm day, and it will be warmer still on Thursday and Friday.”

The Met Office issued a yellow weather warning for strong winds covering most of the southwestern coast of England as well as the Welsh coast.

The warning said: “Some short term loss of power and other services, such as mobile phone coverage, is possible

“It’s likely that some coastal routes, sea fronts and coastal communities may be affected by spray and/or large waves.”