Beijing has declared that only “patriots” should rule Hong Kong – and unveiled plans to change the city’s electoral system to ensure just that.

Candidates for election to the Legislative Council – Hong Kong‘s parliament – will be vetted, according to the proposed changes. And elections scheduled for 2020, already postponed for a year, will be pushed back to 2022.

“The rioting and turbulence that occurred in the Hong Kong society reveals that the existing electoral system in the Hong Kong Special Administrative Region (HKSAR) has clear loopholes and deficiencies,” said Wang Chen, vice chairman of the National People’s Congress (NPC) Standing Committee, according to state media. The NPC, China‘s annual parliament, is meeting in Beijing this week. The changes to Hong Kong’s electoral system are only a proposal but will almost certainly be approved given the rubber stamp nature of the NPC.

“Loopholes” is one of Beijing’s favourite terms for describing aspects of Hong Kong’s governance it dislikes. Its sweeping national security law, announced at last year’s NPC, was described as fixing one loophole. Forty-seven people in Hong Kong are currently facing charges under the law.

The next loophole is Hong Kong’s quasi-democratic elections. Pro-democracy candidates won a landslide in the 2019 local elections in which three million people voted – an unprecedented turnout of 71% of registered voters.

That is clearly intolerable to the Chinese leadership. Candidates for election to the Legislative Council have previously been barred on an individual basis.

The new proposal will formalise the process and likely make it very hard for pro-democracy candidates to stand in elections – let alone win a majority.

What constitutes a “patriot” is left undefined. Chinese state media have been keen to make comparisons to other countries, painting it as a reasonable requirement for a legislator to love their country. 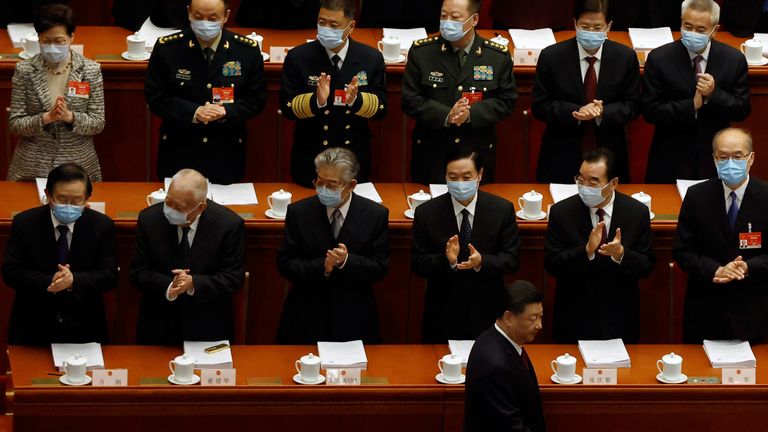 There is of course one big difference when it comes to loving one’s country in China.

In its constitution, China is defined as a socialist state whose key characteristic is the leadership of the Chinese Communist Party (CCP). Loving one’s country means loving the CCP.

Or, as Erick Tsang, a Hong Kong official, said last month: “You cannot say that you are patriotic but you do not love the leadership of the Chinese Communist Party or you do not respect it – this does not make sense.”

And Beijing, as it showed again today, tends to prefer tough love.