A rescue effort is under way to find those still missing after the most powerful explosion ever to hit Beirut flattened the port and devastated the city.

Lebanon is mourning the victims of the blast that has killed at least 137 people and injured 5,000.

The government has ordered officials from the port where the blast took place to be put under house arrest. 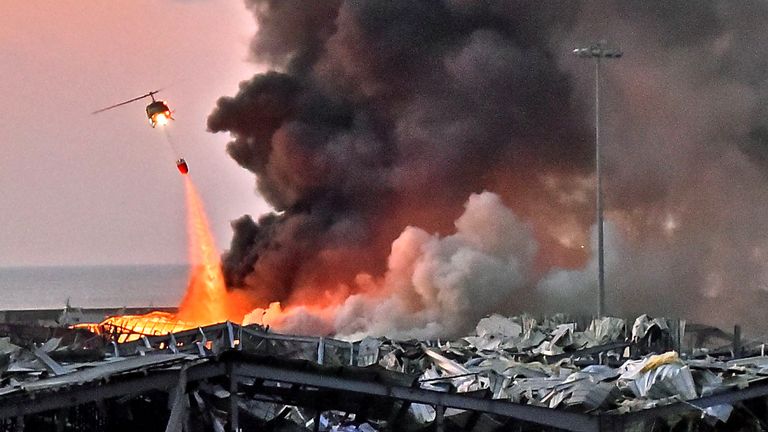 Shockwaves smashed building facades and shattered windows miles away from the epicentre of the explosion on Tuesday.

Dozens of people are still missing as piles of rubble and debris fill the streets of the Lebanese capital.

Army bulldozers have started ploughing through the wreckage to reopen the roads around Beirut’s demolished port.

Officials expect the number of dead to rise, as countries around the world are preparing to send in aid and search and rescue teams. Some aid and rescuers have already started arriving.

It comes after Lebanon’s economy minister said the country’s state and central bank has “very limited” financial capacity to deal with the aftermath of the blast. Officials have blamed the disaster on a huge stockpile of highly explosive material held in unsafe conditions at the port for years.

President Michel Aoun said 2,750 tonnes of ammonium nitrate, used in fertilisers and as an explosive, had been stored for six years at the port after it was seized.

He promised a thorough investigation and to hold those responsible to account. The ammonium nitrate that exploded was likely unloaded there years earlier from a cargo ship that had been seized from its Russian owner, businessman Igor Grechushkin, according to media reports.

Major General Abbas Ibrahim, head of Lebanon’s General Security Directorate, has reportedly said the “highly explosive material” had been stored in the warehouse since it had been confiscated years earlier, Radio Free Europe reported.

Based on that timeline and the size of the cargo, media reports say the ship was likely the MV Rhosus, which was owned at the time of its seizure by Mr Grechushkin.

A businessman from the Siberian city of Khabarovsk has reportedly said Mr Grechushkin currently lives in Cyprus.

The blast is the most deadly to ever hit Beirut, which is still scarred by the country’s civil war three decades ago.

Lebanon has also been reeling from a financial meltdown and surge in coronavirus cases.

“The capacity of the state is very limited, and so is that of the central bank and the banks. We’re not swimming in dollars,” he said.

He added losses from the blast are estimated to run up to billions of dollars, and that working with the International Monetary Fund was the only way out for Lebanon.

French President Emmanuel Macron has become the first foreign leader to visit Beirut after the explosion.

He was said to be arriving with specialist rescue personnel and equipment, and was met at the airport by President Aoun

The Australian government has pledged an initial two million Australian dollars (£1m) to the relief effort in Lebanon.

Britain has promised humanitarian aid of up to £5m, and to send search and rescue teams and medical experts. Other offers of assistance have been pouring in from across the world, with France, Germany, Canada, Bangladesh, Israel, Russia, Jordan, Qatar, Kuwait and Iran among the many countries pledging support.

Tunisia is also sending medical teams and has offered to bring 100 patients back for treatment.

Israeli Prime Minister Benjamin Netanyahu, whose country is officially in a state of war with Lebanon, has said he stands ready to offer to help “as human beings to human beings.”