Belarus’s opposition politicians want “bloodshed”, Russia’s foreign minister has claimed, as about 200,000 anti-government protesters took to the streets of Minsk on Sunday.

Continuing their demonstrations against President Alexander Lukashenko’s election victory two weeks ago, they shouted “go away” and “long live Belarus“. 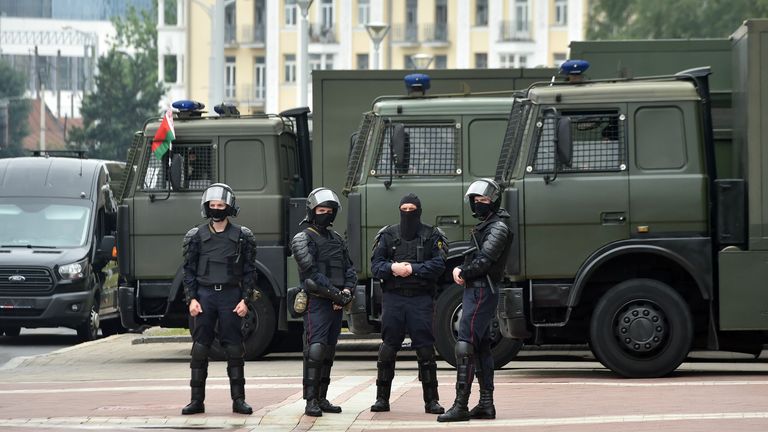 As he got off the aircraft, the president was seen holding what appeared to be a Kalashnikov-type automatic rifle, although no ammunition clip was visible.

In an apparent escalation of tensions, the Belarusian defence ministry said the army, rather than police, will respond to any unrest near the capital’s memorials to victims of the Second World War.

The ministry described the anti-Lukashenko protesters as “fascists”.

A march towards one memorial was overseen by members of the security services in military uniforms, the Reuters news agency said. Dozens of police prisoner transport vehicles were parked on the fringes.

Earlier this month, about 7,000 people were arrested, and many of them beaten with clubs. 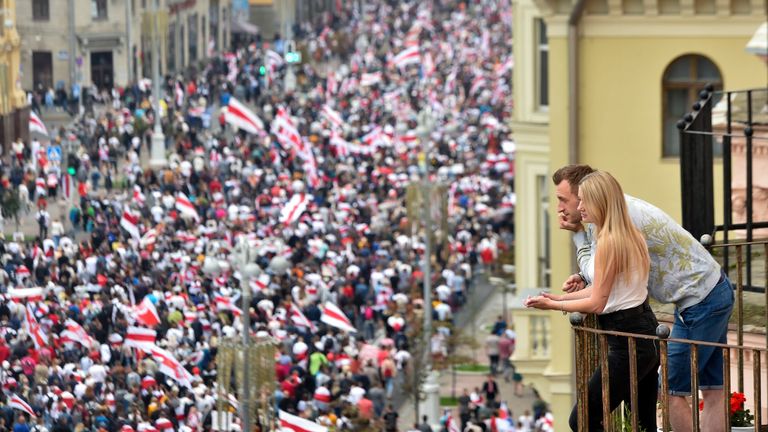 According to officials, Mr Lukashenko, who has been in power since 1994, took more than 80% of the vote on 9 August to claim a sixth term in office.

Opponents claims the ballot was rigged to disguise the 65-year-old’s loss of public support.

But the Russian foreign minister, Sergei Lavrov, claimed it was impossible to tell whether the election was tainted because of a lack of international observers, according to Russian news agency Interfax.

He also alleged that Belarus’s main opposition challenger, Svetlana Tikhanovskaya, has a programme that is neither constructive nor aimed at dialogue.

Ms Tikhanovskaya has said she will return home when the regime is ready for dialogue, and is even willing to engage with President Lukashenko.

The former teacher, 37, who has fled to Lithuania, told Sky News the momentum for change in her country is unstoppable.

Mr Lavrov, however, noted that she is now speaking more often in English and claimed she is being pressured.

He added that Russia would not oppose anything the Belarusian authorities decided regarding dialogue with the opposition.

Mr Lukashenko has offered to hold new elections following a referendum on amending the constitution – something Mr Lavrov described as viable.