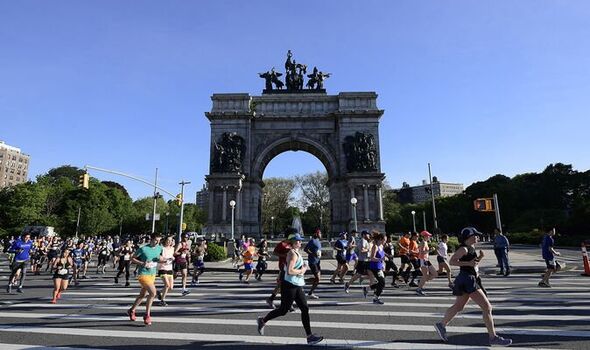 An FDNY spokesperson said the runner collapsed at the finish line at the Coney Island Boardwalk and was rushed to nearby Coney Island Hospital. The participant, whose identity has not been revealed, was pronounced dead at the hospital.

The marathon was held amid a heatwave on the east coast of the US.

An early season heat wave was forecast to affect parts of the East on Friday and Saturday, with afternoon high temperatures expected to hit the 90s in many areas.

The National Weather Service said; “High temperatures are forecast to be between 20-30 degrees above average for much of the mid-Atlantic and Northeast on Saturday.

The Weather Service in Boston added: “Daily and monthly record highs could be challenged if not broken.”

Twenty-five million people are under the heat advisory in the Northeast, the Weather Service said, which called the heat wave “dangerous”.

The Weather Service in New York said: “Seniors and those with chronic health problems or mental health conditions are at an increased risk.

“Homes without air conditioning can be much hotter than outdoor temperatures.”

Speaking to NBC New York, the FDNY said at least six others were also taken to hospital with injuries.

Three of those taken to hospital have had serious injuries while running the marathon.