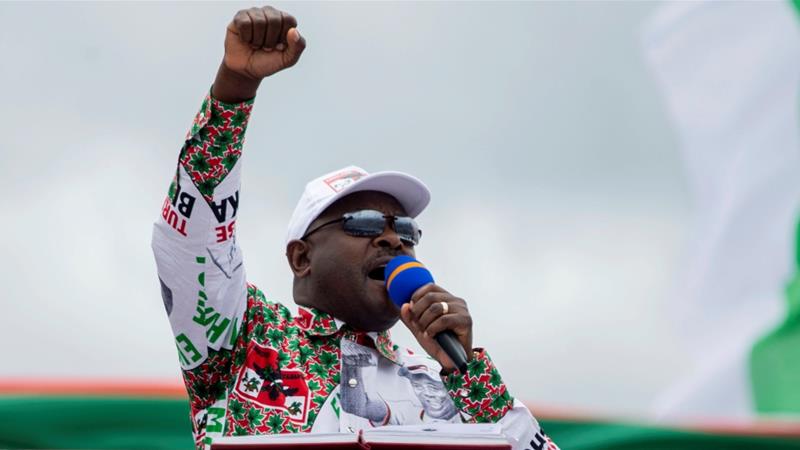 Burundi’s longtime President Pierre Nkurunziza has congratulated the governing party’s hand-picked successor on a “large victory” in the country’s presidential election, though the main opposition has pledged to contest the result in court.

The election commission on Monday declared Evariste Ndayishimiye, a former army general chosen by the CNDD-FDD party as heir to Nkurunziza, the winner of the May 20 poll with 68.72 percent vote.

“I warmly congratulate the President-elect General Major Evariste Ndayishimiye for his large victory which confirms that the great majority of Burundians adhere to the projects and the values he embodies,” Nkurunziza, who chose not to run after 15 years in power, posted on Twitter.

“We are privileged witnesses to history. May God bless Burundi!”

Agathon Rwasa, Ndayishimiye’s main challenger in a race contested by seven candidates, came in a distant second with 24.19 percent of the vote. His National Freedom Council (CNL), however, has rejected the results, alleging cheating by the CNDD-FDD.

CNL spokesman Therence Manirambona said on Monday his party was putting together a legal complaint to submit within days “so that the court can take a decision on the massive fraud that marked this electoral farce”.

The CNDD-FDD defeated the CNL by a similar margin in the legislative elections held on the same day.

The polls went ahead with scant regard to the coronavirus outbreak following a tense campaign marked by violence and arbitrary arrests. They also proceeded without the presence of international observers.

On May 8, 12 days to the polls and before the scheduled arrival of an East African Community mission to the country, the government said the regional bloc’s observers would have to be in quarantine for 14 days, effectively ruling them out of the election process.

Ndayishimiye is expected to be sworn in for a seven-year term in late August, when Nkurunziza’s term ends.

Nkurunziza has been in power since 2005, and his final years in office have been racked by turmoil.

His controversial decision to seek a third term in the last election in 2015 sparked mass unrest, violence and an opposition boycott.

Burundi is tightly controlled by the governing party and its youth wing has been linked to a forceful crackdown against the government’s critics.

State security forces have been accused by rights groups and the UN of crimes against humanity and abuses such as torture, disappearances, sexual violence and executions.

Ndayishimiye is set to inherit a deeply isolated country, under sanctions and cut off by foreign donors, its economy and national psyche damaged by the years of unrest.

It remains to be seen how much influence Nkurunziza will exert going forward, and how freely his successor can reign.

Nkurunziza was this year elevated by Burundi’s parliament to the rank of “supreme guide for patriotism” and he will continue to be chairman of the governing party’s powerful council of elders.