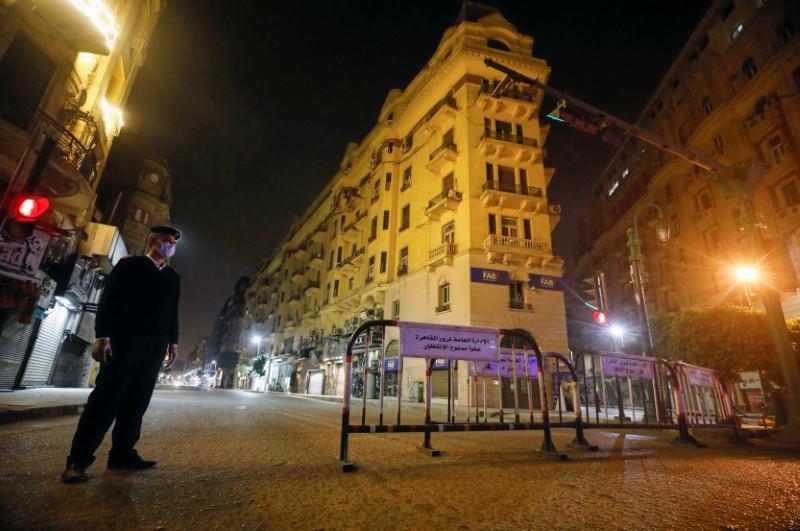 CAIRO (Reuters) – Egypt and its capital Cairo, a mega-city home to some 20 million people, shut down on Wednesday evening as authorities launched a night-time curfew to tackle the spread of the coronavirus.

In a city that never sleeps where restaurants and cafes are usually open until the wee hours, shop owners were closing shutters and commuters rushing home before the start of the 7 p.m. curfew that runs until 6 a.m.

Policemen were posted on key roads to stop any violators. Many streets were already almost deserted by 6:30 p.m.

“This is a disease, not a joke. People must stay at home, and should not leave their houses after curfew hours,” Mohamed El-Gabaly, a Cairo resident, told Reuters, as he stood in a major street with little traffic just before the curfew.

Egypt has stepped up measures aimed at preventing the spread of the coronavirus – closing airports and gyms, as well as suspending classes at schools and universities until mid-April. Restaurants are restricted to just delivering food.

Shops other than supermarkets and pharmacies will be required to close at 5 p.m. on weekdays, two hours earlier than the previous curfew, as well as on weekends.

Egypt, a country of 100 million, has reported 456 confirmed cases of the coronavirus and 21 deaths.

Like other countries, Egypt has taken steps to curtail the impact on the economy, including a surprise 3% interest rate cut and an injection of 20 billion pounds ($1.27 billion) to support the stock market.