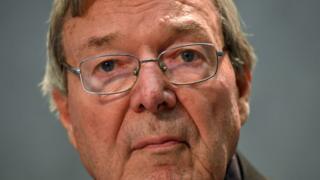 Cardinal George Pell knew of child sexual abuse by priests in Australia as early as the 1970s but failed to take action, a landmark inquiry has found.

The findings on Cardinal Pell – an ex-Vatican treasurer – come from Australia’s royal commission into child sexual abuse, which ended in 2017.

The previously redacted findings were only revealed on Thursday.

A court had previously banned their publication because the cleric was facing child abuse charges at the time.

Cardinal Pell was convicted of child abuse in 2018, but last month was released from jail after Australia’s top court overturned his conviction.

The Australian cleric had always maintained his innocence. The trial was one of the most high-profile cases in Australia in recent years.

What did the inquiry find about Pell?

In over 100 pages of the report, the commissioners found the cardinal knew of paedophile priests both early in his career, and as he progressed.

“We are also satisfied that by 1973, Cardinal Pell was not only conscious of child sexual abuse by clergy, but he also considered measures of avoiding situations which might provoke gossip about it,” the commission said.

Since the 1990s, the cardinal has been criticised in Australia for his response to priest abuse within the Church.

In 2016, when he testified at the royal commission from Rome, he apologised on behalf of the church and said it had “mucked things up”.

Australia’s royal commission inquiry, which ran from 2012 to 2017, found that the greatest number of reported abusers were in Catholic institutions.

The inquiry heard that 7% of the nation’s Catholic priests allegedly abused children between 1950 and 2010.