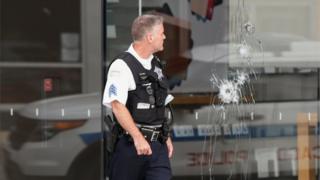 Chicago police will limit access to the city’s downtown after a night of violence and looting following reports of a police shooting.

Police Superintendent David Brown said the area will be restricted from 20:00 to 06:00 and a “heavy police presence” will continue until further notice.

He said the “shameful destruction” was “fuelled by misinformation” about a suspect shot by police on Sunday.

As of Monday, Chicago police have arrested over 100 individuals for looting, disorderly conduct and battery against police, among other charges.

In addition to widespread damage, police reported an exchange of gunfire with suspects in the early hours of Monday. City officials had temporarily suspended transportation services to the downtown area and raised bridges.

A number of videos posted on social media show vandalism and damage to shops. Some clips show individuals walking out of shops with items. In one video, a police officer is struck in the face with an object apparently flung by an individual in the street.

Officials said 13 officers were injured throughout the night, including one who was struck by a bottle. A civilian and a security guard were also injured by gunfire.

In one incident, police said they were arresting a suspect carrying a cash register when a vehicle passed by the officers and fired shots.

Chicago is one of several US cities that has experienced a recent surge in shootings and homicides. The city reported its deadliest day in 30 years in June.

What did officials say?

Mr Brown on Monday told reporters the “seeds for this shameful destruction we saw last night were sown…on Sunday afternoon”, when police responded to a report of a man with a gun.

Mr Brown said police attempted to interview the suspect, who fled and fired shots at the officers. Officers returned fire, striking the individual, who Mr Brown described as a 20-year-old man with four prior arrests. The suspect is in hospital and expected to survive.

“After this shooting a crowd gathered on the South Side following the police action. Tempers flared, fuelled by misinformation, as the afternoon turned into evening,” Mr Brown said. “[Chicago police] became aware of several social media posts encouraging looting downtown.”

He described “car caravans” heading into the downtown area on Sunday night and said 400 officers were dispatched there.

“Criminals took to the streets with confidence there would be no consequences for their actions,” Mr Brown said. “I for one refuse to allow these cowardly acts to hold our city hostage.”

Chicago police are looking into security footage from last night to identify the suspects and a heavy police presence will be in place until further notice. Police will also work with other agencies. including transportation officials and state law enforcement in “a multi-layered plan”, Mr Brown said.

Chicago Mayor Lori Lightfoot condemned the violence on Monday, calling on justice officials to hold the individuals responsible for the damage accountable. She highlighted the differences between Sunday’s unrest and the protests in the wake of George Floyd’s death.

“These individuals engaged in what can only be described as brazen and extensive criminal looting and destruction – and to be clear, this had nothing to do with legitimate, protected First Amendment expression.”

“This was an assault on our city,” she said, saying it also undermines Covid-19 recovery efforts.

She said small businesses and restaurants who were in the process of getting back to work were among the damaged storefronts.

The mayor added that the looters were not “poor people engaged in petty theft to feed themselves and their family, this was straight-up felony criminal conduct”.

Mayor Lightfoot also defended Chicago police, saying officers deserve to work “without having to worry about shots being fired, projectiles being thrown, and being maced”.

Addressing the individuals involved in last night’s unrest, she said: “We are already at work finding you and intend to hold you accountable for your actions. I do not care whatever justification was given for this. There is no justification for criminal behaviour ever. You have no right.”