BBC Weather: Temperatures to reach below freezing in some parts

A brutal cold blast is expected to wreak havoc in north-western regions during the middle of March, as low pressure could push strong winds and wintry conditions over Britain. Ferocious swirls of white and blue are seen pummelling snow over Britain from a north-westerly direction from the Atlantic on March 13, the long-range winter overview models from WXCHARTS show. The snow probability charts also show north-western parts of the UK being covered by swirls of purple, dark blue and white, suggesting there is between 10 to 65 percent chance of snow striking the same day,

Brian Gaze at Weather Outlook warned winter could return to the UK from next week, with an “increasing Atlantic influence” hitting by the middle of March.

He said: “The meteorological winter ends tomorrow but the second half of next week could see it turn colder as high pressure builds northwards.

“High pressure looks set to remain in charge of the weather across the UK during the coming days.

“We’re at the time of year when frost can readily develop at night, but the strong sun can lead to mild or even relatively warm afternoons. 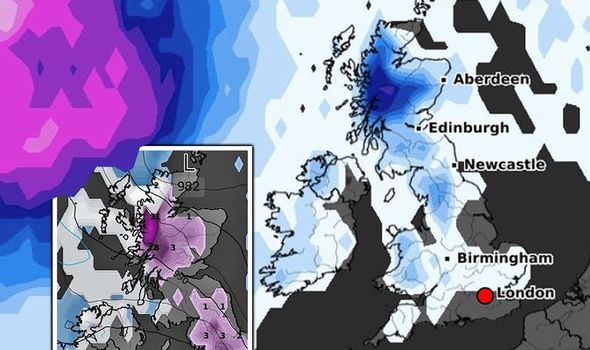 “A big diurnal (day to night) variation in temperature is very possible.

“The London GEFS 06z plot illustrates things well. The bottom part of the plot shows the precipitation forecast and it is looking dry during the first third of March.

“The number of rain spikes begins to increase towards the middle of the month perhaps suggesting an increasing Atlantic influence.

“Upper air temperatures shown on the top half remain above the 30 year average until about March 5.

“They then dip to below it for a period of 4 or 5 days indicating the risk of a colder period.” 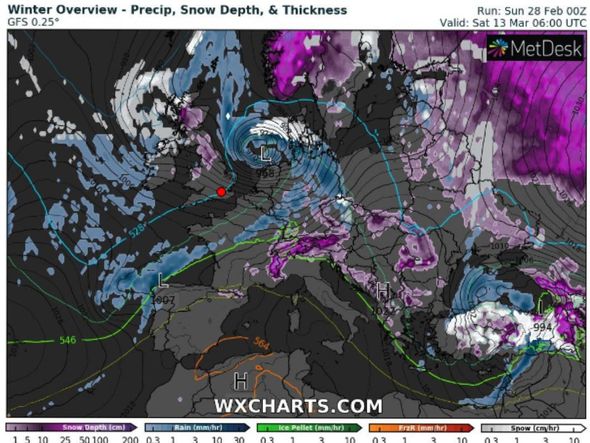 Temperatures could also plunge as low as -9C in Scotland by Sunday, March 14, as the cold weather sweeps over.

Further down in England, the Lake District and Cumbria could see -7C on the same day, while London and Kent are hit with freezing 0C.

The BBC’s long-range forecast from Monday, March 8 and Sunday, March 14, hinted a new weather front from the Atlantic could bring “colder than normal” temperatures.

The forecast said: “For the second week of March (and meteorological spring), high pressure is expected to become less and less influential as it slowly shifts westward into the Atlantic. 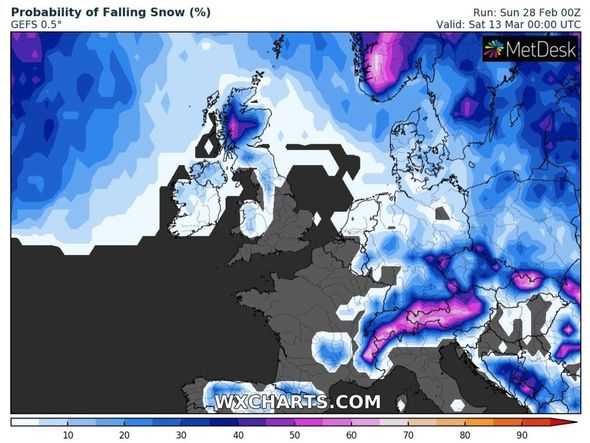 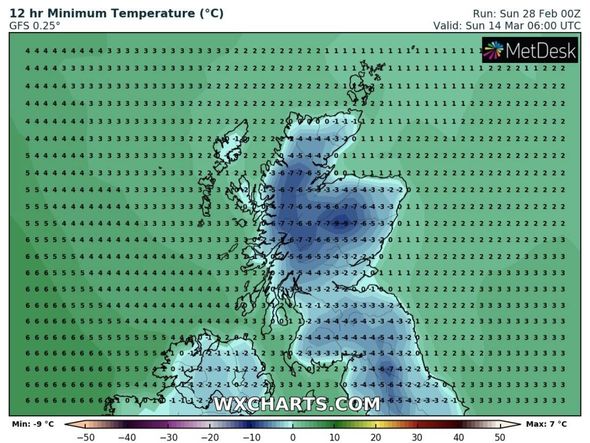 “As it moves further away, a large-scale trough of low pressure is expected to develop near Scandinavia and Western Russia.

“This means for the UK, winds will be generally westerly or north-westerly and bring Atlantic weather fronts in from the northwest.

“The pattern shift will be gradual, with lows becoming more of a dominant feature towards the end of the week.

“The first half of the week will remain largely dry, although a few weak fronts may drift nearby and bring extra cloudiness to western or northern coasts. 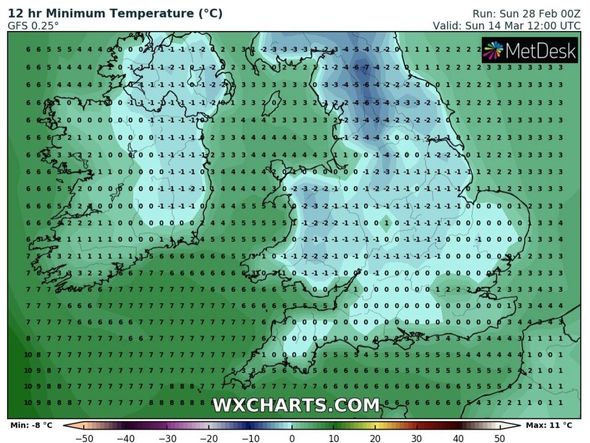 “It will likely still be a drier than normal week on average. But the second half of the week is expected to be a bit wetter and windier (mainly in the north) as weather fronts grow more frequent.

“Similarly, the first half of the week is expected to be a bit colder than normal (focused in the east) while weather fronts later will bring in more mild spells and changeable conditions.”

The Met Office also added “cold intervals” could strike in March despite spring being around the corner.

The long-range forecast between Saturday, March 13 and Saturday, March 27, said: “Settled conditions are likely to continue at the start of the period, though Atlantic frontal systems may make more progress across the country at times, introducing occasional wetter weather. 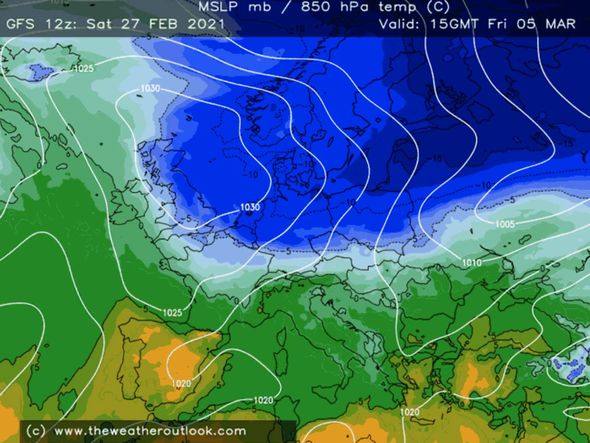 “This may be associated with around normal to colder than normal conditions for a time.

“After this however, a trend towards more unsettled conditions through the middle part of March is signalled with spells of rain and showers but with some drier interludes.

“Rain perhaps becoming more confined to the north and west later with the south and east seeing some more prolonged settled periods.

“Temperatures are most likely to remain around or a little above average and whilst there are no signals for prolonged cold, some brief colder intervals continue to remain possible.”