Authorities in both countries are struggling to restore road links and electricity in areas hit by Cyclone Amphan. 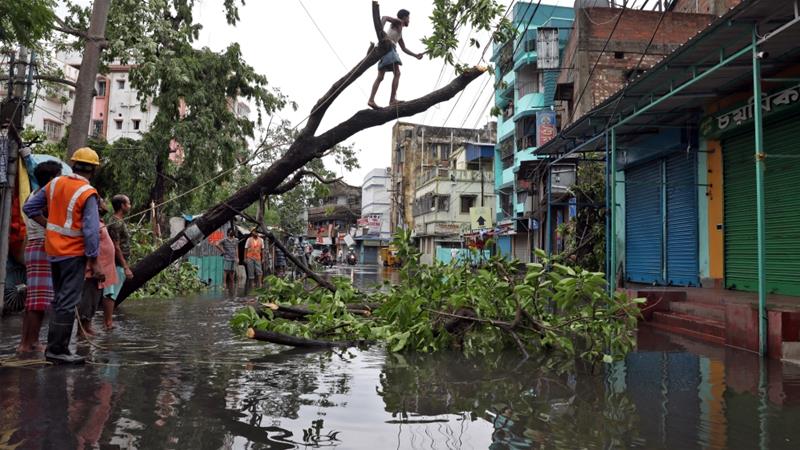 Authorities in eastern India and Bangladesh have been struggling to restore road links, communication lines and electricity after a devastating cyclone in which at least 95 people were killed.

“I assure my brothers and sisters of West Bengal that the entire country stands with you in these difficult times,” Prime Minister Narendra Modi said on Friday after conducting an aerial survey of the devastation in the state.

He announced emergency aid of 10 billion rupees ($131.7m) for the state, which bore the brunt of Cyclone Amphan in India. More than 70 people have been killed in the state.

The state’s chief minister, Mamata Banerjee, who accompanied Modi, had earlier said the cyclone was worse than the coronavirus that has killed more than 3,000 people in India.

“I haven’t seen a disaster of this magnitude,” she said on Thursday.

Cyclone Amphan made landfall on Wednesday accompanied by high-speed winds and torrential rain. It destroyed homes and crops, uprooted trees, submerged vast tracts of land and snapped power and communication lines in both India and Bangladesh.

So far at least 95 deaths have been reported: Eighty from West Bengal and Odisha states in India and 15 from Bangladesh, according to disaster management officials.

Most of the deaths were caused by trees falling on thatched houses, the collapse of parts of buildings due to the impact of the winds and rain, and electrocution, officials said. 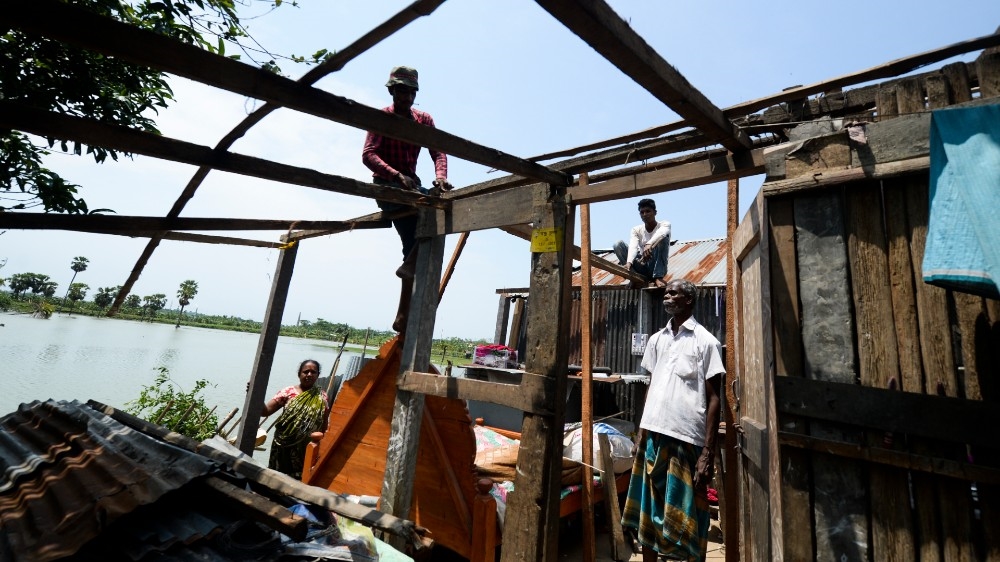 The United Nations office in Bangladesh estimates some 10 million people were affected, and some 500,000 people may have lost their homes.

Improved weather forecasting meant Bangladesh was able to move some 2.4 million people into shelters or out of the storm’s direct path, while India evacuated some 650,000.

At least 10 million people were without power on Thursday afternoon in the worst-hit districts of Bangladesh, rural electricity board chief Moin Uddin told AFP news agency.

The storm levelled more than 55,000 homes – most made of tin, mud and bamboo – across Bangladesh, junior disaster management minister Enamur Rahman told AFP.

Thousands of trees which blocked roads in West Bengal were being cleared, water pumped out and electricity gradually restored.

Police were using drones to assess the damage in Kolkata, a city of 14 million people, where an estimated 10,000 trees were brought down during the storm that lasted several hours and brought extensive flooding.

“Municipal teams, civil defence personnel, police personnel have been working overtime to restore road connectivity first. But there is an acute shortage of manpower due to coronavirus related restrictions,” Ghosh said.

“Private buses and trains are still not in service. We really need citizens of Kolkata to come forward and lend a helping hand in whatever way possible.”

The clean-up operations are complicated by the new coronavirus with millions now housed in emergency shelters after their homes were destroyed.

Officials in West Bengal and Bangladesh said they were currently trying to assess the extent of loss and damage especially in the Sunderbans mangrove forest, a UNESCO World Heritage Site, about which information was still trickling in.

The cyclone weakened as it moved north through Bangladesh but still unleashed heavy rain and fierce winds in Cox’s Bazar, the district which houses about one million Rohingya refugees from Myanmar.

The UN said the effect in the vast camps of flimsy shacks appeared to be “fairly minimal”.

The area most affected by Amphan, the first “super cyclone” to form over the Bay of Bengal since 1999, was the Satkhira district of southwest Bangladesh.

There a storm surge – a wall of ocean water which is often one of the main killers in major weather systems – roared inland and destroyed embankments protecting villages and shrimp farms.

“My home has gone under water. My shrimp farm is gone. I don’t know how I am going to survive,” Omar Faruq, 28, told AFP.

Jessore, the district next to Satkhira and which borders West Bengal, was also hard hit with at least 12 killed.

“The coronavirus has already taken a toll on people. Now the cyclone has made them paupers,” said local councillor Bhabotosh Kumar Mondal.

The last super cyclone in 1999 left nearly 10,000 dead in Odisha, eight years after a typhoon, tornadoes and flooding killed 139,000 in Bangladesh.