The President of the United States as well as the children are seen in the footage not wearing any face coverings or practising social distancing, just hours after Mr Trump urged American citizens to practice social distancing and wear masks. During his Thursday evening White House briefing, Mr Trump emphasised the importance of following the health and hygiene guidance.

He had previously shown his advocacy for the measures when, on Monday, he referred to the wearing of face masks as “patriotic” when “you can’t socially distance”.

On Thursday, Mr Trump said: “We will continue to monitor the areas rising, with respect to cases.

“And we ask all Americans to exercise vigilance, practice social distancing, wear a mask, do whatever is necessary so we get rid of this horrible situation, this horrible disease.”

But after the briefing, Mr Trump headed outside for an event on the White House lawn with almost 20 Little League players. 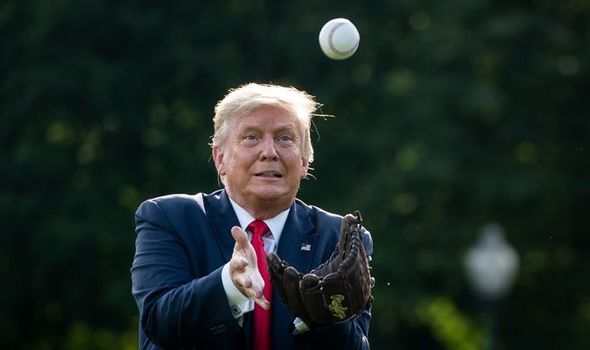 The President and the children played catch to celebrate the return of baseball following the coronavirus pandemic.

To mark the occasion, Mr Trump share a video to his Twitter account of himself and special guest, New York Yankees Hall-of-Famer Mariano Rivera playing catch with the children. The video, which was accompanied by the caption “WELCOME BACK BASEBALL!”, quickly racked up over 95,000 likes, but not everyone agreed with the President’s move.

Some outraged Twitter users took to the comment section to condemn Mr Trump’s decision not to enforce the wearing of masks on the presidential lawn.

One furious Twitter user: “Hey Don, I know you like baseball, however there was absolutely no social distancing and ABSOLUTELY NO face coverings in your video. 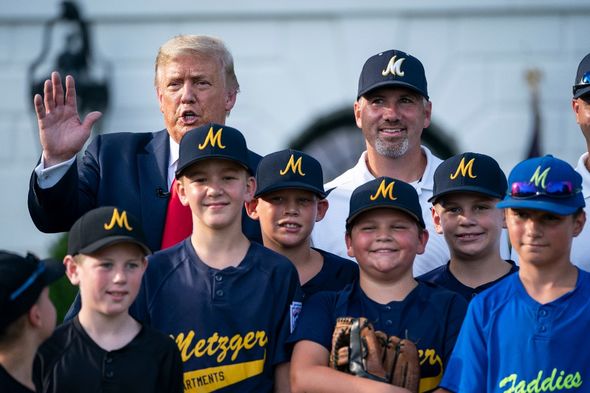 “What happened ??? So much for your concern about the health of the United States citizens.”

In response to Mr Trump’s video, another user added: “I bet the 144,000 families of the people who died of COVID because he kept saying it was under control and would just disappear may disagree.”

Other Twitter users did not seem to mind the lack of social distancing and rather showed their support for the President. 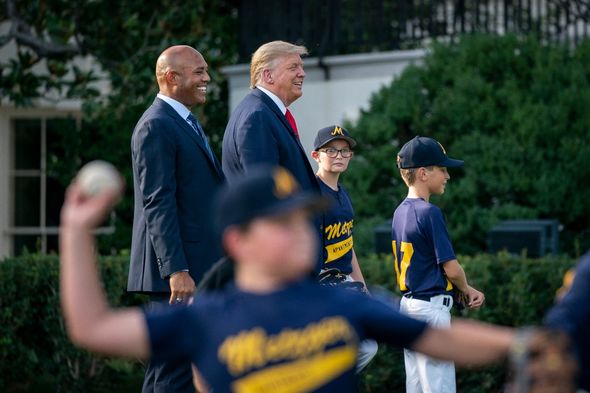 “Supporting our youth team sports. So good for kids in many ways.

“Baseball, one of Americas favourite sporting events and I’m pretty sure it originated right here in the good ‘ole USA!”

Another fan added: “We love YOU Mr President!

“You’re the best thing that happened to America in the last 30 years. 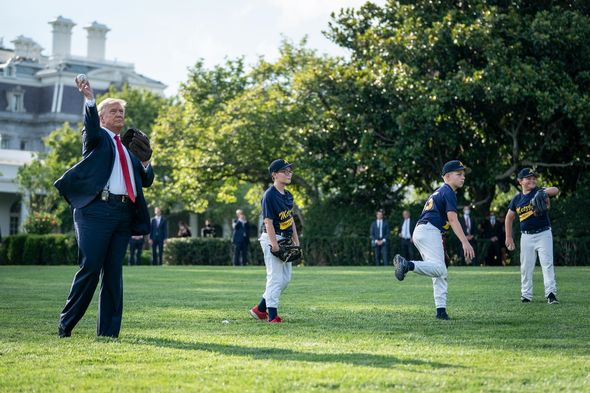 “God always bless you and your Family.”

It comes after Mr Trump revealed at a press conference Thursday that he will be throwing out the first pitch at a Major League Baseball game.

Speaking of how he was invited to do the honours by the Yankees team president, Mr Trump said: “Randy Levine’s a great friend of mine from the Yankees.

”He asked me to throw out the first pitch … It’s going to be interesting.”