France’s president has been hit on the shoulder by an egg thrown during an event to promote the country’s food.

Emmanuel Macron, 43, was walking through the crowd when it bounced off him without breaking, video of the incident at the gastronomy trade fair in Lyon showed.

Two bodyguards could be seen immediately getting closer to the head of state to protect him following the incident. 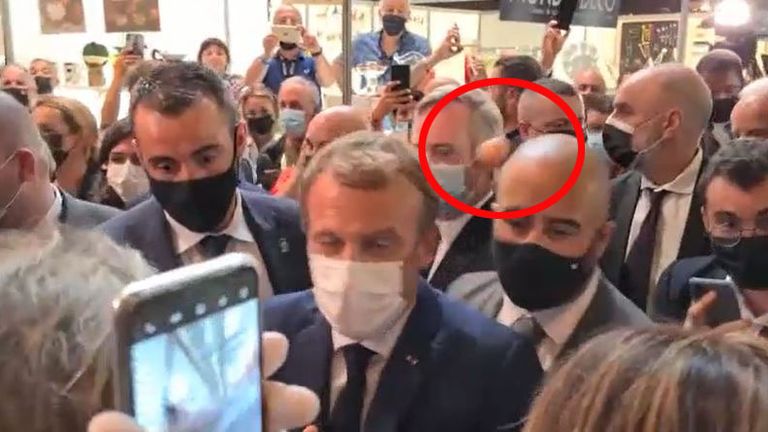 The footage, which was shared on social media, also showed a man being led away by what appeared to be other members of the security team.

The identity of the suspect has not been revealed.

Reporters at the scene heard Mr Macron saying: “If he has something to tell me, then he can come.”

During the incident at the international catering, hotel and food trade fair, a protester shouted, “Vive la revolution (long live the revolution)”.

Back in June, Mr Macron was slapped in the face by a man as he was greeting a crowd in the town of Tain-l’Hermitage in southeastern France.

Damien Tarel, 28, received a four-month prison sentence as well as an additional 14-month suspended sentence for the offence.

Tarel was banned from ever holding public office and from owning weapons for five years.

In court, the defendant described himself as a right-wing or extreme “patriot” and a member of the yellow vest economic protest movement that shook Mr Macron’s presidency in 2018 and 2019.

He told the court in the southeastern city of Valence that the attack was unplanned and impulsive and prompted by anger at France’s “decline”.