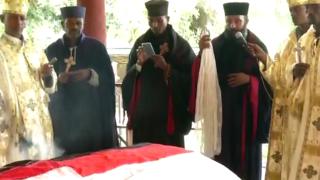 The funeral has been held for Ethiopian singer Hachalu Hundessa as unrest over his death has spread from the Oromia region where he was seen as a hero.

At least 81 people have been killed in protests in Oromia since Hachalu was shot dead on Monday night.

The motive for his killing remains unclear, but the 34-year-old had said he had received death threats.

His songs focused on the rights of the country’s Oromo ethnic group and became anthems in a wave of protests that led to the downfall of the previous prime minister in 2018.

Our reporter says ethnic and religious tensions have intensified in the aftermath of the killing.

What happened at the funeral?

“Hachalu is not dead. He will remain in my heart and the hearts of millions of Oromo people forever,” the Reuters news agency quotes his widow Santu Demisew Diro as saying at the funeral.

The ceremony took place at a stadium in Hachalu’s home town of Ambo, west of the capital, and was broadcast live on Oromo Broadcasting Network television.

“I request a monument erected in his memory in Addis where his blood was spilt,” Ms Santu said.

Our reporter says the stadium was not full as many residents in Ambo stayed at home amidst heavy security after days of violence.

There are reports that mourners had tried to delay the funeral until the release of influential Oromo politician Jawar Mohammed.

Who has been arrested?

Dozens of people have been detained, including Mr Jawar, who was arrested after protesters tried to block Hachalu’s body from leaving the capital on Tuesday.

Mr Jawar, a media mogul, has led calls for more rights for the Oromo, Ethiopia’s largest ethnic group, who have been politically marginalised by previous governments.

He supported reformist Prime Minister Abiy Ahmed, himself an Oromo, when he came to power in April 2018 but has since become an ardent critic.

More arrests have been made in the capital, including that of prominent journalist and activist Eskinder Nega.

What has the prime minister said?

On Wednesday, Mr Abiy warned that those behind Hachalu’s death wanted to derail his reform programme.

“This week, a very heinous crime was committed on artist Hachalu Hundessa. Those who planned the crime are those who are not happy with the current change in the country.

“We have two choices as a people. To fall into the trap being set up by detractors or to deviate from their trap and stay on the course of reforms. Choosing the first is to willingly aid them in our demise,” the prime minister said.

‘A thorn in the flesh’

Since his youth, Hachalu Hundessa was a thorn in the flesh of successive governments.

As a student in Ambo, a city at the forefront of the campaign by Oromos for self-rule, Hachalu joined student groups calling for freedom. At the age of 17, he was imprisoned for five years for his political activities.

He became increasingly politicised in prison, as he increased his knowledge about Ethiopia’s history, including its rule by emperors and autocrats – and also developed his music skills.

“I did not know how to write lyrics and melodies until I was put behind bars. It is there that I learned,” he said in 2017.

He released his first album Sanyii Mootii (Race of the King) in 2009, a year after walking free, and it turned him into a music star, and a political symbol of the Oromo people’s aspirations.

However, he played down his political role, saying: “I am not a politician, I am an artist. Singing about what my people are going through doesn’t make me a politician.”

Why have Oromos been protesting?

The Oromo, Ethiopia’s largest ethnic group, have long complained of being sidelined.

Demonstrations erupted in 2016 and pressure built on the government.

He has brought in a series of reforms, which have transformed what was considered a very oppressive state.

However, long-standing ethnic tensions have boiled over into violence.

Mr Abiy won the Nobel Peace Prize in 2019 primarily for making peace with long-time foe Eritrea, but his efforts in transforming Ethiopia were also recognised.