French European Affairs Minister Amélie de Montchalin said on Monday that an investigation into the alleged excessive use of force by police against protesters had been launched after a Women’s Day rally in Paris was marred by violence. Mme de Montchalin told France Info radio: “It is very important for us to have full clarity on what actually happened on both sides.

“While we stand in solidarity with our security forces when they find themselves in dangerous situations; any behaviour that is not in line with the peacekeeping doctrine must be sanctioned. That is why an investigation has been launched.”

A Women’s Day march in Paris on Saturday evening was tainted by violence.

Several thousand feminists had taken to the streets of the French capital to call for an “anti-racist feminism,” but clashes broke out as riot police used tear gas to disperse the crowds and nine people were arrested.

Rights groups and politicians have since denounced what they said was police brutality after videos and images of protesters being beaten up and manhandled by police were shared on social media. 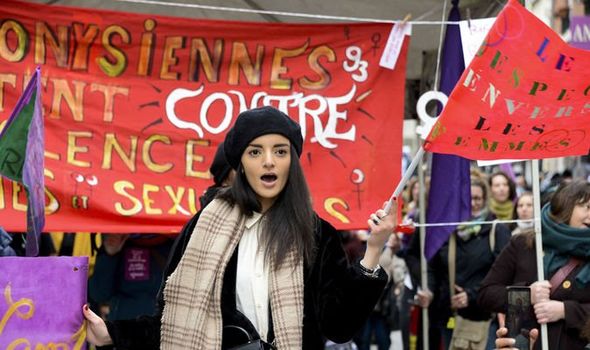 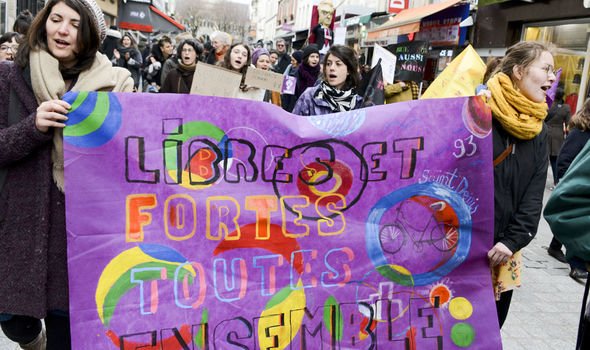 Paris’ leftist mayor Anne Hidalgo, who is currently seeking re-election, said that she was shocked at the “unacceptable and incomprehensible” violence and expressed her solidarity with the demonstrators.

Gender Equality Minister Marlène Schiappa told France Info on Sunday that while she found the images of the battered and bruised women “shocking,” she wanted “to know more about the context” before jumping to any conclusions.

However, a spokesman for the Paris Police Prefecture appeared to deny the accusations against the police, saying the march had taken place in a climate of “calm”.

Millions of women took part in events across the world but unrest flared at some rallies.

Women were attacked with stones and sticks at events in ultra-conservative Pakistan; while in Turkey, Istanbul police hurled tear gas to stop women from converging on the city’s central avenue after authorities banned the march for the second year running.

Mass rallies were held in Chile, where authorities said around 150,000 people gathered in Santiago.

But scuffles broke out as police used tear gas and water cannons to prevent some protesters from storming the presidential palace.

In China, the epicentre of the coronavirus epidemic, state broadcaster CCTV praised the work of female medical workers on the frontlines in the fight against the deadly infection.

Despite fears over the worsening outbreak, rallies went ahead in Thailand, Indonesia and the Philippines. However, a women’s marathon planned in India was postponed over coronavirus concerns.

In South Korea, several Women’s Day events were cancelled because of the coronavirus epidemic.