When the history of this global moment is written, there will need to be an entire chapter on police forces’ spectacular own goals as force for change.

Around the world, the police have cracked down violently on protests — only to discover that their attacks, captured on camera and shared across social and conventional media, have been the catalyst that helped turn issue-based campaigns into mass movements.

Movements like Black Lives Matter in the United States, the 2019 uprising in Chile that led to a new constitution, and, now, Colombia’s protests grew out of political wounds unique to each society. But each was transformed into a broad, potentially generation-defining cause once protesters were confronted with police violence.

Police attacks can cause people to reconsider their assumptions about whether they can trust their government, or the health of their democracy, said Yanilda González, a Harvard Kennedy School political scientist who studies policing, state violence and citizenship in the Americas.

“It allows that first contact of, ‘Oh, what people have been saying is true. The police do seem to act in these arbitrary and violent ways, unprompted, unprovoked, without justification,’” she said. 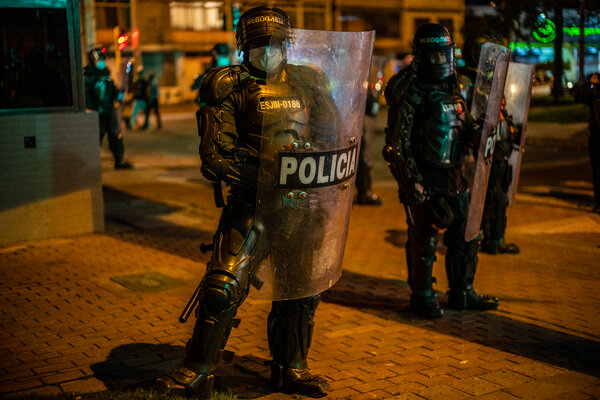 That realization can lead to national reckonings.

“Police violence is a constant as a spark that can trigger protest movements,” said Omar Wasow, a Princeton University political scientist who studies protests, race and politics. “And it is a fuel that can sustain them.”

‘Any kind of dissent makes us targets’

The uprising in Colombia began on April 28 as a protest against tax reforms that were proposed to fill a budget gap that had worsened during the pandemic. They quickly became a vent for public anger at inequality and poverty, longstanding problems that had become sharply worse during the pandemic.

Then videos of police attacking protesters went viral, and the protests became a much broader movement.

Videos circulated of a young man dying after being shot, and then later of his distraught mother, outside the hospital, screaming to her dead son that she wanted to go with him. Another clip appeared to show a police officer shooting a youth who had kicked his motorcycle. Others captured blood-soaked bodies lying on the ground, and panicked protesters screaming that they were going to be killed.

The reports of police abuses fueled more protests, but police crackdowns continued, which in turn generated more images and reports of assaults. Each time that cycle repeated, it gathered more energy, bringing more people to the streets.

For many Colombians, the reports, not all of which have been confirmed, were disturbingly familiar. For decades, human rights groups have accused the army and police of committing such abuses, and worse, during the country’s long-running civil war against leftist rebels, including the guerrilla group FARC, which signed a peace treaty with the government in 2016.

During the armed conflict those attacks occurred largely in the “periphery,” as Colombians refer to the rural areas that were most hotly contested by rebel groups. City residents were less likely to have experienced them directly. Even as documentation of government atrocities piled up, many Colombians concluded that violence, while regrettable, had been necessary to combat the threat of “terrorist” guerrilla groups.

But the war shaped the culture and training of Colombian police, who amid the protests have often appeared to draw little distinction between peaceful protesters who object to the government’s policies and violent guerrillas who wanted to overthrow the state.

Now, after police attacks on urban protesters, “people are realizing how the police are usually acting in rural areas all the time,” said María Mercedes Ramos Cerinza, 28, a Bogotá-based human rights advocate. “In the city there is now an understanding that the attacks are indiscriminate — that they are not targeted to one population in particular. Any kind of dissent makes us targets.”

Pulling the abuse into view

There are clear parallels in other mass movements, experts say.

When the civil rights movement marched on Selma, Ala., in 1965, its leaders knew that the police would respond with violence, Dr. Wasow said. But they hoped that bringing that violence into view of television cameras, and by extension to white Americans outside the south, would call attention to the reality of life in the segregated south.

“Sheriff Clark had been beating Black heads in the back of the jail for years, and we’re only saying to him that if he still wants to beat heads, he’ll have to do it on Main Street, at noon, in front of CBS, NBC, and ABC television cameras,” Rev. Andrew Young, a civil-rights leader who was arrested at the march, said in a 1965 interview.

When television stations around the country aired footage of police attacking the nonviolent marchers, including women and children, “Bloody Sunday” became a pivotal moment in the civil rights movement.

And last year, police violence against demonstrators who gathered to protest George Floyd’s death had a similar effect.

In each case, the police violence served as an object lesson in the civil rights movements’ central argument: that the freedom, equality and opportunity at the heart of the American project had not been fully extended to Black citizens. The right to criticize the government has always been central to the American story. And so footage of protesters being beaten or gassed for trying to do so sent a message that a crucial element of democracy was in jeopardy — or perhaps had never been fully there in the first place.

In Chile in 2019, protests initially began as opposition to an increase in transit fares. It was the government’s fateful decision to restore order by calling out the army — for the first time since Gen. Augusto Pinochet’s military dictatorship ended in 1990 — that transformed the protests into a national movement with widespread political support.

Army tanks rolling through the streets sent a message that the country’s transition to democracy was incomplete, and at risk of collapse. Protesters carried placards printed with the face of Victor Jara, a folk singer murdered in the early days of the Pinochet regime, drawing a direct connection between the modern protests and the tanks that brought General Pinochet to power.

Just a year after the protests exploded, Chileans voted to scrap the constitution drafted during the Pinochet years and replace it with a new one.

‘This is not the country we want’

In Colombia, the violence against protesters, and the heavy militarization of the streets in cities like Bogotá, has likewise sent a message that the country’s democratic project is not just unfinished, but is perhaps in jeopardy.

The 2016 peace agreement was supposed to end the armed conflict between the government and the FARC. But the actions of the state security forces over the past two weeks have many questioning whether peacetime democracy ever began at all.

“I think that the story of this country is about the armed conflict,” said Erika Rodríguez Gómez, 30, a lawyer and feminist activist from Bogotá. “We signed a peace agreement in 2016. And maybe at that moment we felt like, OK, we are going to move on.”

“But actually we have all of the military forces on the streets. And we have these attacks against us, the civil society,” she said. “So we think now that actually, they were never gone.”

It is too soon to say whether the protests will lead to lasting change. The attacks on protesters have made state violence visible to more people, said Dr. González, the Harvard researcher, but she believes that they are still considering it through the lens of “their usual scripts about understanding society, and understanding the police, and understanding everything. So it hasn’t quite come to the point of people converging.”

But Leydy Diossa-Jimenez, a Colombian researcher and Ph.D. candidate in sociology at the University of California, Los Angeles, said that she sees this moment as a turning point for change across generations. “Gen Z, they are now rethinking their country, and thinking about what has been left by prior generations,” she said in an interview. “They are saying ‘No, this is not what we want.’ ”

“And I think for the first time now, the older generations in Colombia are allying with that idea, that this is not the country we want,” she said.

“I don’t know if the politicians are up to the challenge, and up to the historical moment,” she added. “I just hope they are.”