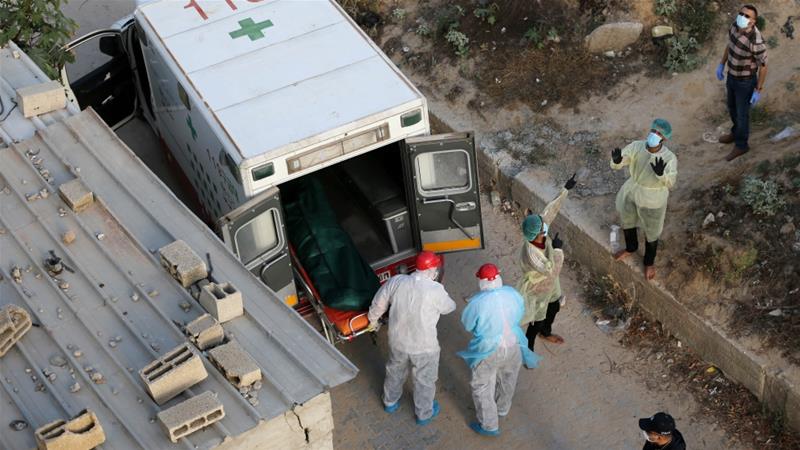 Authorities in Gaza have reported the first novel coronavirus fatality in the besieged territory, after a sharp rise in confirmed infections in recent days.

“Fadila Muhammad Abu Raida, 77, from the Khan Younes governorate, died in isolation in hospital at the Rafah Crossing due to her infection with coronavirus,” the health ministry said on Saturday.

A wave of coronavirus infections among residents returning to Gaza has more than doubled the number of cases in the coastal enclave in recent days, raising fears of a bigger outbreak.

Gaza had managed to limit the number of confirmed COVID-19 cases to no more than 20, with its borders with both Israel and Egypt closed to prevent the spread of the respiratory disease.

But in recent days, around 1,500 Palestinians who had been stuck in Egypt were allowed to return via the Rafah crossing, while smaller numbers were permitted to enter from Israel.

They were all placed in confinement, but 35 new cases have been confirmed among them, including 25 on Thursday, authorities announced, raising the total number to 55.

Health ministry official Yussef Abu al-Reesh said on Thursday that those infected had mingled with other returning residents, including in the quarantine centres.

Authorities were verifying whether any had met with Gaza residents before entering quarantine, he added.

In recent weeks, preventive measures in the enclave had been relaxed, with cafes and restaurants allowed to reopen.

Khalil al-Hayya, a senior official with the Hamas movement, which runs the enclave, told a news conference on Thursday that authorities were considering imposing a curfew.

The United Nations has warned that a coronavirus outbreak in Gaza could be disastrous, given the high poverty rate and weak health system in the coastal strip under Israeli blockade since 2007.

Gaza’s healthcare system is fraying under the weight of an Israeli-Egyptian blockade, internal Palestinian division and a several wars and skirmishes between Israel and Palestinian armed groups.

Home to two million people, the Gaza Strip has only a few more than 60 ventilators and a chronic shortage of medication.

Since mid-March, Hamas has enforced mandatory quarantining at hotels, clinics and schools for all residents returning via Israel and Egypt. With the recent spike of cases, Hamas said it was closing Gaza’s borders for all arrivals until the end of June.

But on Friday, mosques were reopened for noon prayers across the territory, with worshippers bringing their own prayer rugs, wearing masks, maintaining social distancing and receiving hand sanitiser.

Authorities say the partial reopening of the mosques after nearly two months of closure came after relative success at keeping the virus at bay and preventing an outbreak.

Schools and wedding halls remained closed in Gaza. Hamas’ interior ministry said public and amusement parks are not allowed to open during Eid al-Fitr, a major holiday marking the end of the holy month of Ramadan, that starts Sunday.