Have gun will travel: Coronavirus at meat plants builds demand for mobile butchers 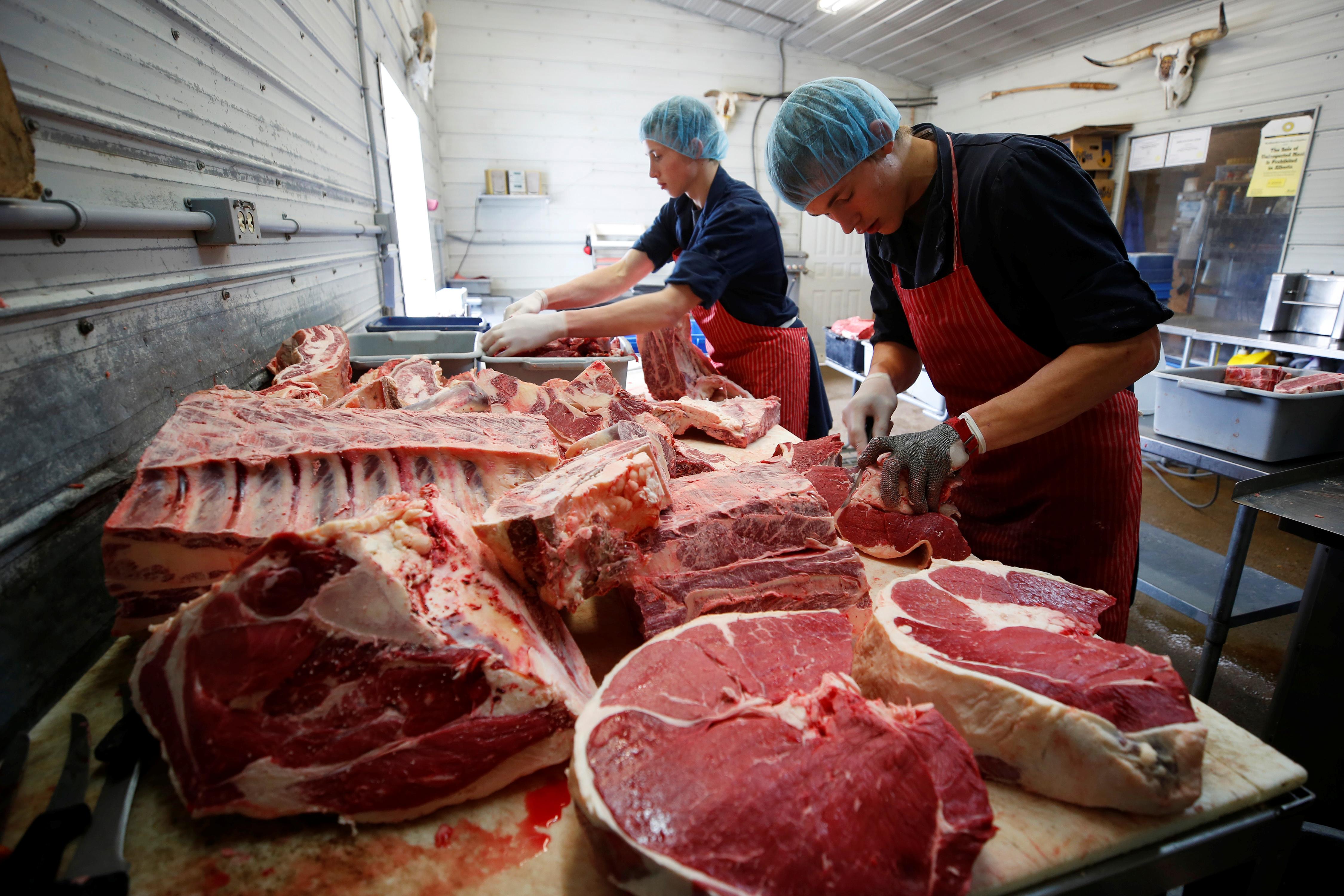 On this day, vande Bruinhorst, a .303 rifle in hand, arrives early at a customer’s ranch. He wears boots, coveralls and a rubber apron to catch any blood.

With one shot to the forehead, the 1,300-pound Black Angus steer goes straight down. Vande Bruinhorst hauls it to his shop, where he will hang the carcass for 14 days before cutting it. His wife Dicky does the wrapping and the rancher returns to pick up the meat.

He kills one or two per day.

“What I like best is I’m working from home, and yet I’m not always stuck at home,” said vande Bruinhorst, who immigrated to Canada from The Netherlands at age 18. “I travel all over the area. It’s just a pleasant way to make a living.”

Vande Bruinhorst, one of Alberta’s 113 mobile butchers, earns about C$500 per animal. Unlike slaughter in a plant, no inspector is present at his kills, on the condition that consumption of the meat is restricted to the farm household.

Yet opponents say restrictions on mobile butchers should stay tight, since slaughtering without inspectors present could create a health hazard.

In Alberta, where coronavirus infections this spring overwhelmed beef plants owned by Cargill Inc [CARG.UL] and JBS (JBSS3.SA), the province is reviewing the rules for farm-gate meat sales.

Butchering also happens on U.S. farms. The number of mobile slaughter units authorized by the U.S. Department of Agriculture (USDA), which include inspectors, has nearly doubled in three years, to 16.

“You’ve got cattle ready to go right now and customers willing to buy it, but your hands are tied,” he said. “If the mobile butchers could come to your ranch, and it would be legal to sell the meat, that would help.”

Brent Dejong, a mobile butcher from Fort Macleod, Alberta, said regulations should allow his customers to sell meat to the public, provided customers know it was not inspected.

The use in the United States of federally inspected abattoirs on wheels should expand, but limited inspector numbers hold them back, said Patrick Robinette, owner of Micro Summit Processors, a North Carolina abattoir.

“With COVID, mobile slaughter is going to be an integral tool,” said Robinette. “It’s time to redesign how we’re getting food from the field to the plate.”

The North American Meat Institute, which represents packers, sees mobile units as a good option for some livestock producers, said Vice-President Sarah Little. But she said expanding the program would not significantly offset lost plant production.

U.S. regulations also allow “custom-exempt establishments”, including mobile butchers, to slaughter livestock without an inspector present, provided the meat is for consumption only of farmers, their households and workers, said a spokeswoman for the USDA’s Food Safety and Inspection Service.

Some animal rights groups prefer more on-the-farm slaughter, which eliminates the stress of transportation to packing plants and of animals hearing the deaths of others, said Leah Garces, president of activist group Mercy for Animals.

Others say slaughter should only occur under the eyes of inspectors.

“The rules we abide by now are in place for a reason,” said Jim Johnson, owner of abattoir Alberta Prairie Meats. “There’s going to be someone who screws the system and sells roadkill or something.”

British Columbia said this month it would license more farmers and butchers to slaughter a limited number of animals for direct meat sales.

Saskatchewan allows the public sale of meat from animals slaughtered on farms, provided that the consumer knows the meat is not inspected.

Back in Picture Butte, a visitor asks vande Bruinhorst if he could slaughter a steer of his choosing from a nearby feedlot. 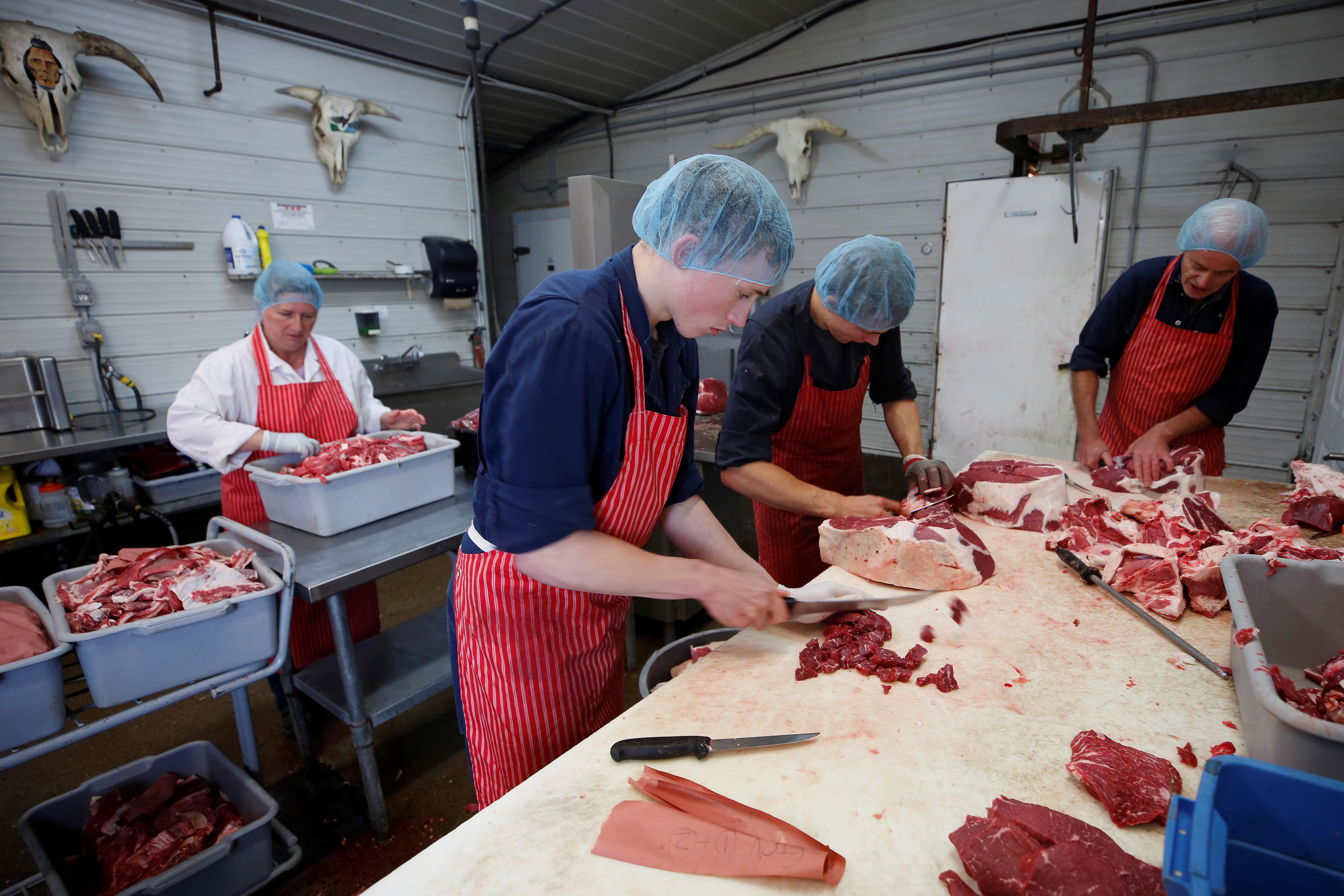 Buying its meat would be against Alberta’s rules, vande Bruinhorst told him.

“Customers really believe the meat tastes better if the animal hasn’t bounced around on the way to a strange facility,” he said.

“They want to do it local.”