HONG KONG (Reuters) – Hong Kong police arrested a 24-year-old man at the city’s airport in the early hours of Thursday on suspicion of attacking and wounding an officer during protests against a new national security law Beijing imposed on the financial hub. 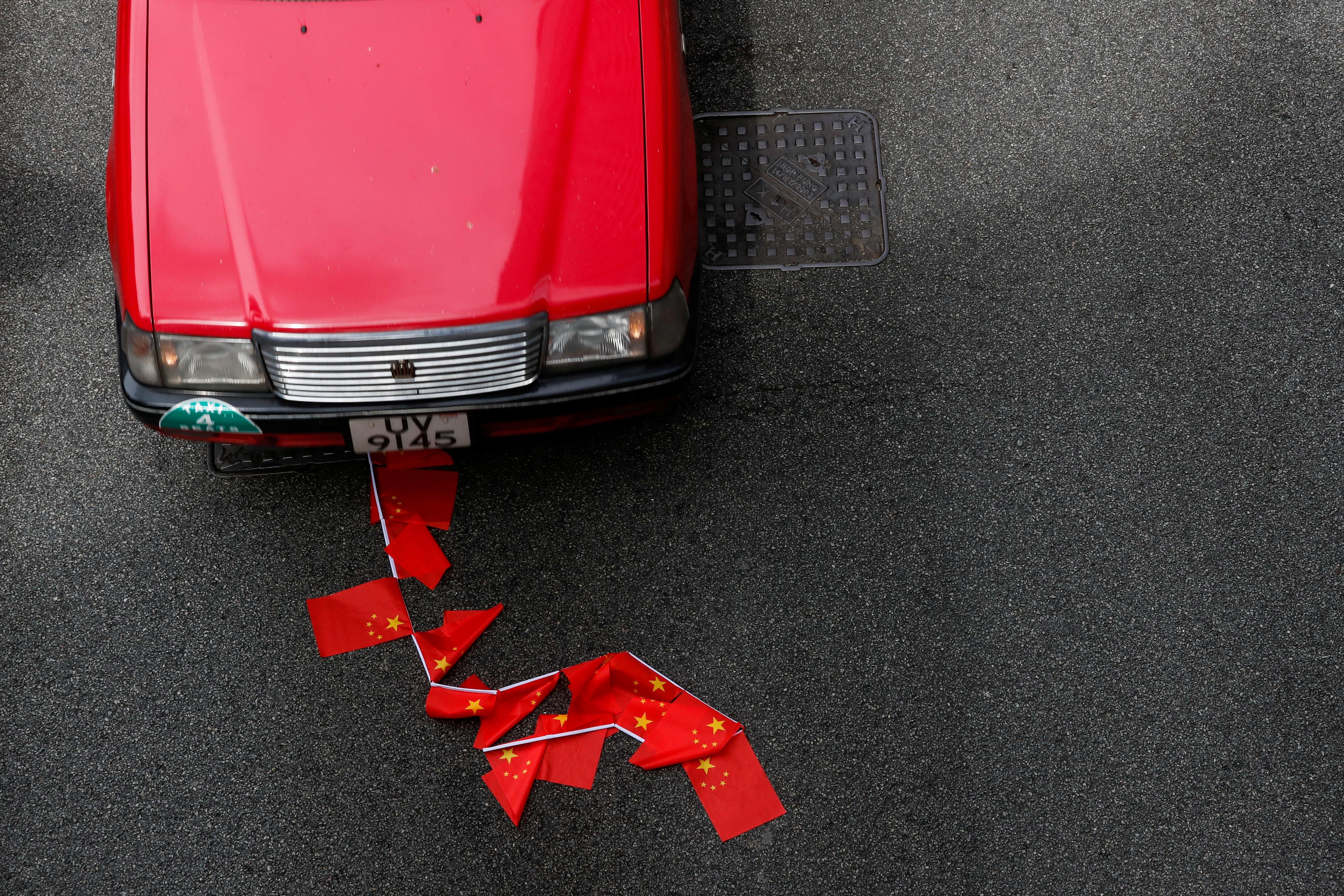 Hong Kong police fired water cannon and tear gas and arrested more than 300 people on Wednesday as protesters took to the streets in defiance of the sweeping security legislation introduced by China to snuff out dissent.

On Wednesday, police posted pictures on Twitter of an officer with a bleeding arm saying he was stabbed by “rioters holding sharp objects”. The suspects fled while bystanders offered no help, police said.

A police spokesman told Reuters the arrested man was surnamed Wong but could not confirm if he was leaving Hong Kong or working at the airport.

Local newspaper Apple Daily, citing unnamed sources, said the suspect was onboard a Cathay Pacific flight to London due to depart just before midnight.

A witness said “around 10 minutes before take-off, three police vehicles drove towards No. 64 gate, outside the Cathay Pacific plane” and around 10 riot police ran up the bridge to the aircraft.

Local television Cable TV, citing a police source, said police received an anonymous call at 11.43 pm, 12 minutes before the flight was scheduled to depart, that the suspect was on his way to London. He bought a one-way ticket about two hours after the stabbing, the only purchase for that flight made on Wednesday, and arrived at the airport without luggage.

He held an expired British National Overseas passport, a special status created under British law in 1987 that specifically relates to Hong Kong and provides a route to citizenship, the source told Cable TV.

Cathay Pacific did not immediately respond to a request for comment.

Former Hong Kong leader Leung Chun-ying posted on Facebook on Wednesday that a bounty of HK$500,000 ($64,513) would be offered to anyone helping catch the fugitive and that confidentiality would be ensured.

The money would come via 803.hk, a website linked to Leung, which offers “crowdfunded” rewards for information leading to the prosecution of some anti-government protesters. The name of the site refers to an incident on Aug. 3, 2019, when a Chinese national flag was thrown into the sea during a protest.

Police said on Wednesday they had made around 370 arrests for illegal assembly and other offences, with 10 involving violations of the new security law.

The law punishes crimes of secession, subversion, terrorism and collusion with foreign forces with up to life in prison. It will also see mainland security agencies in Hong Kong for the first time and allows extradition to the mainland for trial in courts controlled by the Communist Party.

China’s parliament adopted the law in response to protests last year triggered by fears that Beijing was stifling the city’s freedoms, guaranteed by a “one country, two systems” formula agreed when it returned to Chinese rule in 1997. Beijing denies the accusation. 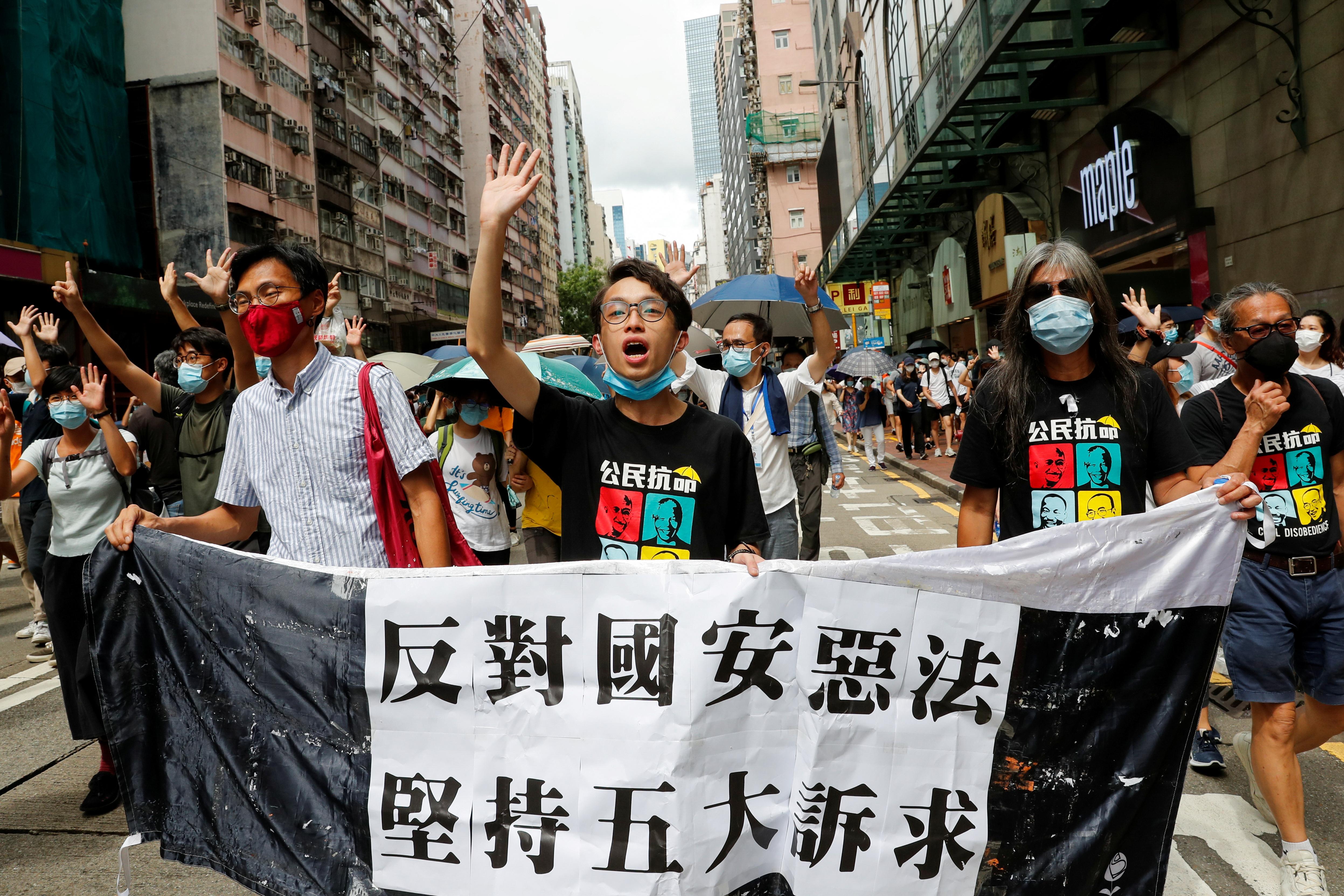 Chinese state media on Thursday praised the passage of the law, saying it would bring “prosperity and stability.”

“We must face up to the fact that the existence of legal loopholes in safeguarding national security has already made Hong Kong society pay a heavy price,” a commentary in People’s Daily, the official newspaper of the Communist Party, read.