Home » World News » I want to meet five friends. How can I stay safe?

I want to meet five friends. How can I stay safe? 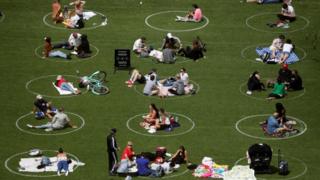 After two months at home – two months of virtual happy hours, socially distanced hangouts, and learning when to unmute yourself on Zoom – all 50 states and the District of Columbia have begun the process of reopening.

For some of us, that means the first face-to-face interactions with friends and family outside our household in weeks.

But even as lockdowns are lifted, without a vaccine – which is likely still a year away – the risk remains.

“I would tell most people: just because places are opening, does not mean the virus is under control,” Dr Abraar Karan, physician and public health researcher at Harvard Medical School tells the BBC.

“The virus is still out there,” he says. And every social interaction is an opportunity for the virus to catch and spread.

“This is a new kind of risk that we’re going to have to incorporate.”

So how can you see your friends safely? We spoke to Dr Karan and two other health experts to help weigh the risks of meeting friends, and some of the decisions you might face while you’re there.

To start, the outdoors are a good place to be, Dr Karan says.

“Outdoor risk is likely much lower. Point blank,” he says. And 6ft apart is key to lowering risk.

“The virus can transmit further than 6ft, but if you’re outdoors the particles are likely to disperse.”

“The 6ft is based on a lot of research,” she says. “It’s probably not foolproof but it’s a safe enough distance that it became the recommendation.”

But for Dr Marcus, every question about risk and Covid hinges on your options.

“Each of these decisions could be made thinking about the risk relative to whatever your alternative is,” she says. So while 6ft is likely safe “10ft is obviously better”.

If it’s windy, can we sit a bit closer?

But a particularly breezy day doesn’t mean you should be invading your friends’ personal space.

“The key is: we don’t know enough about what outdoor transmission looks like,” Dr Karan says.

Can we hug each other briefly if we are wearing masks?

“This is a virus that’s not going to go anywhere,” says Dr Amesh Adalja, a senior researcher in infectious disease and pandemic preparedness at Johns Hopkins University. “I don’t think the solution is not to hug anybody.”

Echoing Dr Karan and Dr Marcus, Dr Adalja stresses that the risks and benefits for any social interaction during this period will look different for every person.

“For certain individuals, the benefit is going to outweigh the risk,” Dr Adalja says.

And if you decide to break the 6ft barrier, wearing a mask “probably” reduces the rate of transmission, he says, meaning face coverings are a smart harm reduction strategy.

“I don’t think the virus is spreading around the world because people are sharing candy bars,” he says.

But before you opt for a picnic with friends, Dr Marcus and Dr Karan advise caution.

“If you can avoid sharing food and drinks, that’s probably safest,” Dr Marcus says. And if you do: “keep your hands as clean as possible”.

“It’s even more granular,” Dr Karan adds. “What kind of food are we walking about?”

Things like individually wrapped sandwiches are likely fine, he says. But for now, it’s best to skip messier snacks like chips and dip.

When we laugh and raise our voices, does that increase risk?

Some bad news for loud talkers: it likely does.

“There have been studies looking at the aerosol transmission for louder speakers,” Dr Karan says.

Outbreaks in church choirs, like those in Washington state and Arkansas – even without physical contact between members – add weight to this theory.

Is there a safe way to invite friends into my house?

All three experts agree – outdoors is better than indoors.

“If you’re inviting friends indoors you just have to understand… you are at a higher risk and you’re putting your friends at risk,” Dr Karan says. “That’s just a tough reality.”

But they also note the harms of social isolation, especially for long periods.

“The virus is something you have to live with,” Dr Adalja says. “It’s not a viable situation not to see anybody.”

Having a friend inside your home can be done in a “common sense way,” he adds.

Still, as he says, the virus is primarily getting around by individuals in close contact with each other – something to keep in mind if you’re socialising indoors.

Is it safe for them to use my bathroom?

Bathrooms are tricky, Dr Karan says, because of their “high touch paths”.

Especially as virus particles can live in the air for several hours, and even longer on surfaces, sharing a bathroom could cause more risk than its worth.

How should I disinfect the space afterwards?

If you decide to have a friend come inside for a visit, the clean up shouldn’t be too difficult. Soap and water should do.

Are kids – generally thought to be lower risk – allowed to play with each other? Can they share toys?

Though infection and mortality rates among children are lower than adults, that doesn’t mean they are immune.

“We need to understand more about the transmission risk among children,” Dr Karan says. “We don’t know what factors will predispose kids to more severe disease, or how they will transmit to adults.”

So for now, Dr Karan says, arranging playdates for children should be avoided.

“I’m not saying your kid is never going to play with his kid again,” he says. “I’m saying give it some time.”

Can I pet my friend’s dog or cat?

There is evidence of Covid-19 among pets, Dr Karan says, but none so far suggesting that dogs or cats can transmit the virus to humans.

“Is it impossible? No, but we don’t have evidence,” he says.

So while you may want to pause before hugging a friend, giving a warm welcome to their golden retriever should be safe.

Is it safe to swim in a pool?

The water itself shouldn’t make things any riskier.

“It’s not waterborne transmission from what we know,” Dr Karan says.

But spending time in a pool has its own problems.

“The biggest concern: we can’t swim with masks on,” he says. “You still need to socially distance,” which may prove tricky while treading water.

What’s the etiquette for asking friends where they’ve been and what kind of contact they’ve had with others?

For potentially difficult or awkward conversations about where a friend has been, or who they’ve seen, Dr Marcus suggests looking at resources and guidance that already exists.

In the polyamory community, for example, conversations about risk tolerance, boundaries, and exclusive vs non-exclusive relationships predate concerns over Covid-19.

“The point is: let’s not reinvent the wheel here,” she says. “I think we probably have some of these skills that were developed in other contexts that can be leveraged.”

But before you make plans…

Across all these choices, experts say that the goal should be reducing harm and risk as much as possible.

“Most activities that are non-essential but put you at high risk are probably not worth it right now,” Dr Karan says. “The economy pushed us to open up sooner than we would have done from a public health standpoint.”

As a rule of thumb, Dr Marcus suggests minimising the number of contacts you have. So if you start to loosen social distancing, try to keep that contact to as small a number of people as possible.

“It’s much safer to have one other household join yours in a double bubble than it is to have a dinner party with a different family every night,” she says.

But as long as the outbreak continues, there will be compromise.