Astride the Mid-Atlantic Ridge where the European and North America tectonic plates diverge, Iceland and Icelanders are familiar with volcanic activity. However, not usually quite so close to their doorstep; this is the first eruption in almost 800 years in the southwest peninsula of Reykjanes where, within a 50 km (c. 30 miles) radius, more than 70 % of Iceland´s population lives. In excitement about this novelty, rather than fleeing the scene, people are flocking by the thousands to view the spectacle. Iceland´s former President Ólafur Ragnar Grímsson compared the atmosphere to a folk festival. This is a very Icelandic reaction to a ‘tourist´eruption, as they call them.

The Geldingadalir eruption is, so far, a very small, and relatively low risk eruption. According to the Universty of Iceland on 23rd March, on average 5.7 m3 of lava is being discharged every second at a fairly stable rate, coming from a depth of 17 – 20 km, directly from the mantle into an uninhabited mountain valley. At that time around 1.8 million m3 of lava had been erupted.

The latest scientific thoughts are that this might be the start of a long-lasting (months to years) shield volcano eruption, similar to those that occur in Hawaii.

Due to the high fluidity of the magma and the lack of ice cover, there is very limited risk of volcanic ash or widespread flight disruption from this eruption.

How dangerous is it? The risks are local, particularly around the eruption site, but serious enough that care is needed when visiting.

From the eruption itself toxic gas emissions (carbon dioxide, carbon monoxide, sulphur dioxide and hydrogen sulphide) close to the eruption site, accumulating in depressions especially during low wind conditions or spreading downwind, are the most dangerous and could lead to death. 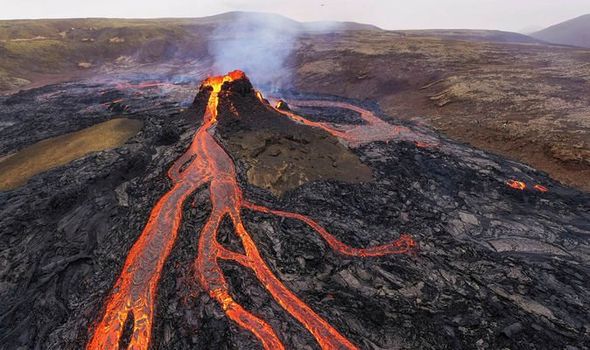 Following monitoring in recent days it has been identified that the gas risk is much higher than previously thought. The lava front, as well as the lava surface and cones, are unstable and can break releasing a fast-moving lava lobe more than 10 times hotter than boiling water, and a new fissure or vent may open with little warning.

So far though, it is the weather and hard-going terrain that has caused most problems. The 3.5 km hike (each way) to the eruption site is across rough terrain of old lava flows and steep slopes and the weather is wintery and highly changeable.

On Sunday night the weather conditions deteriorated and many visitors were still at the eruption site after nightfall. 140 search and rescue volunteers worked into the early hours of Tuesday to look for 40 people who had not returned safely to their cars, some of whom were found disorientated and exhausted. Thankfully everyone was found.

This is not the first time that people flocking to eruptions fallen foul of winter weather. In February 2000 rescue teams were called out to save 1500 people who became stuck in their cars in a snow storm as they returned to Reykajvik from visiting the erupting Hekla volcano.

Short-term closures of the area have occurred already due to gas hazard and low wind conditions. 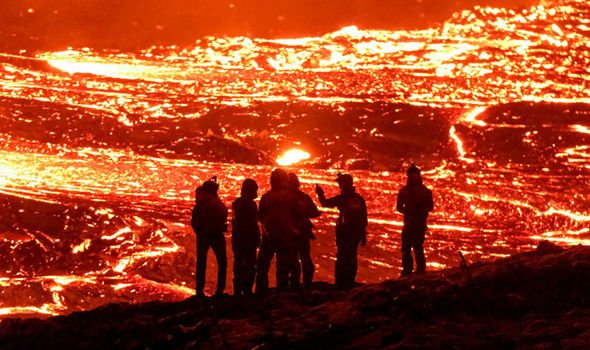 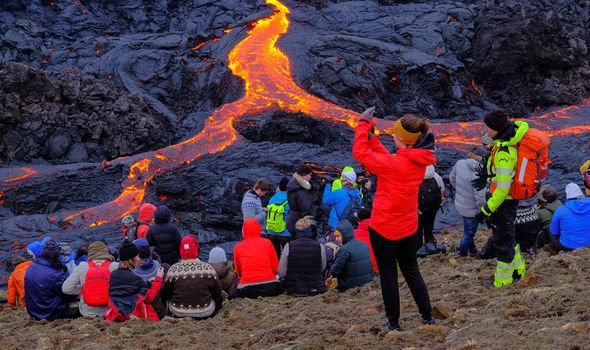 Meanwhile, when considered safe enough, public interest in visiting the area is being managed by distributing information from the Department of Civil Protection and Emergency Response, Met Office, police and scientists via newspapers, television reports and social media.

On Tuesday the local Þorbjörn Rescue Team marked a new hiking route with yellow stakes to help guide visitors and provide safer access. The rescue teams and police, armed with gas meters and their own gas mask, work hard to support scientists and carry out a rota of 24 hour shifts at the eruption site to ensure the safety of visitors.

All volcano watchers should be well prepared for the weather and a challenging hike, check weather, gas dispersal forecasts, safety advice, and webcams, keep their back to the wind, be prepared to quickly leave or find higher ground if a gas meter siren is heard and not get too close to the lava edge.

If someone falls due to gas inhalation people should not go to their aid without a gas mask.