The houses belonged to two Palestinian prisoners accused of carrying out an attack in the occupied West Bank last year. 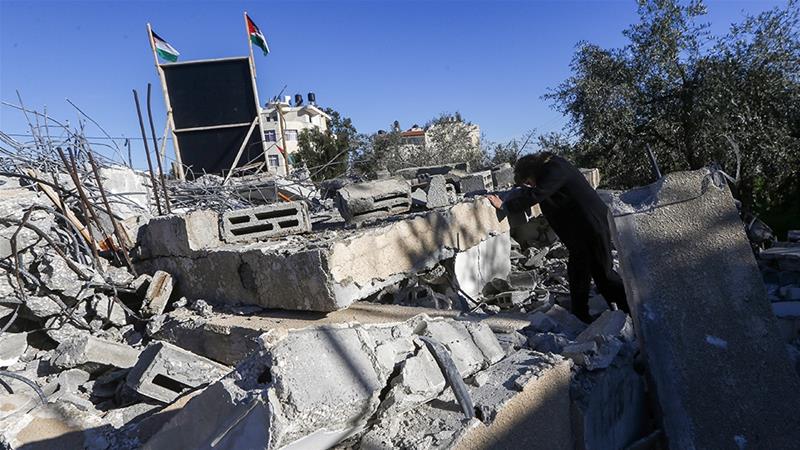 Israeli forces have demolished homes of two Palestinians in the occupied West Bank.

Walid Hanatsheh and Yazan Mughamis are currently in custody and facing trial over allegations of carrying out an attack in the West Bank last year which killed an Israeli citizen and injured another.

Witnesses told local media that armed Israeli vehicles stormed into the town of Birzeit on Thursday, cordoned off the area surrounding Mughamis’s house before tearing it down.

Israeli forces used jackhammers to demolish the walls of Hanatsheh’s apartment in Ramallah.

Local media also reported that the families were notified of the demolition order in October.

Human rights organisations term the policy of home demolitions as “collective punishment”. According to Israeli rights group B’tselem, “over the years, Israel has demolished hundreds of houses as part of this policy, leaving thousands of Palestinians homeless”.

Israel says it employs demolishing family homes as a “mean of deterrence” to stop attacks by Palestinians, who say they are resisting Israeli occupation and encroachment on Palestinian land.

Although Israel usually carries out home demolition orders in occupied East Jerusalem, it also uses the policy to destroy homes in the West Bank located close to the separation wall that cuts through parts of it.

Israel occupied East Jerusalem, the West Bank and Gaza – besieged since 2007 – during the six-day Arab-Israeli war in 1967.

Shortly after capturing East Jerusalem, Israel expanded the municipal boundaries of the city to take in large areas of land on which it later constructed Jewish settlements.

At the same time, it sharply limited the expansion of Palestinian neighbourhoods, forcing many in the increasingly crowded areas to build illegally.

Palestinian leaders want the territories to be part of their future state, with East Jerusalem as its capital, while Israel considers the entire city of Jerusalem to be its capital.

The increase in demolition comes amid a sharp rise in Jewish settlement activity in East Jerusalem and the West Bank since US President Donald Trump took office, whose recognition of Jerusalem as Israel’s capital in 2017 caused a massive uproar.

Last year, the Trump administration said it would no longer consider Israeli settlements in the occupied territories illegal – though they are considered as such under international law.

According to a report by the United Nations Office for the Coordination of Humanitarian Affairs, 2019 saw a 45 percent increase in demolitions and confiscations of Palestinian homes in the occupied West Bank compared with the previous year.

The figures, published in January 2020, showed that a total of 393 Palestinian structures were destroyed or confiscated in Area C, which is under full Israeli control, compared with 271 structures in 2018.

The number of Palestinians displaced from their homes also increased to 507 in 2019, compared with 218 the previous year.