Footage of the rocket, believed to have been taken in Haifa, Israel, showed a rocket being intercepted by the Israeli defence system, the Iron Dome. The attack from Lebanon comes as tensions between Israel and Palestine keep spiralling out of control for the tenth day in a row.

Security sources in Lebanon confirmed that four rockets were launched towards Israel from Seddiqine.

Seddiqine is a village in the region of Lebanon’s southern coastal city of Tyre.

This is the third incident of rocket fire from Lebanon since May 10. 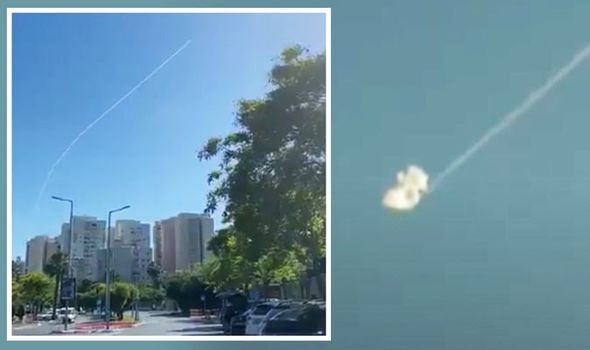 Six shells were fired from Lebanon towards northern Israel.

However, the shells missed their target and did not make it over the border.

Israeli artillery issued retaliation fire in response to the attack.

There was no damage or casualties as a result of these rockets.

There have been previous experience rockets fired from Lebanon into Israel.

In 2006 a war between Israel and Hezbollah guerrillas broke out.

The Hezbollah guerrillas did have access to advanced rockets.

Since then, the Israeli border has not seen many incidents of rocket attacks.

There have been inconsistent attacks on Israel from Palestinian factions in Lebanon.

This latest attack has raised fears that war could break out in the Middle East as tensions continue to rise.

US President Joe Biden has looked to de-escalate tensions in the region in recent weeks.