Policy announced as death toll reaches 5,476, and other countries step up controls on movement and daily life. 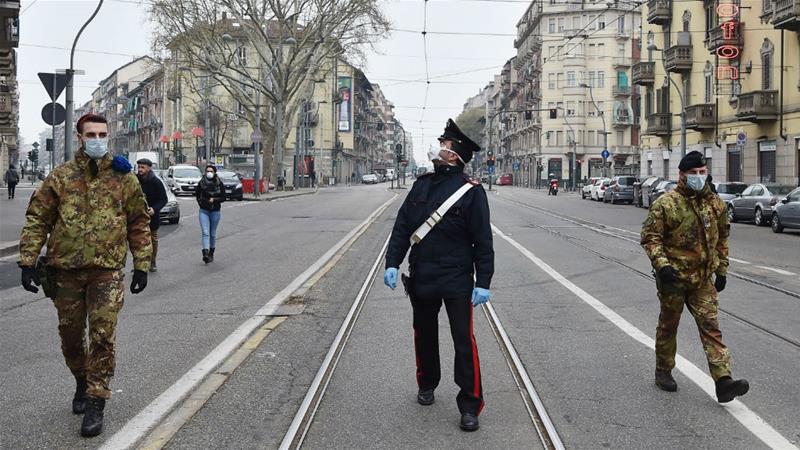 Italy moved to stop all travel within the country, in a further escalation of its attempt to curb the spread of the coronavirus pandemic, a month after announcing its first death from the disease.

Italy’s travel ban was announced as all non-essential businesses including car, clothing and furniture makers were ordered to close and a further 651 people died from COVID-19, the illness caused by the virus.

Domenico Arcuri, head of the government’s coronavirus relief effort, told state broadcaster RAI that Italy was “at war” with the virus

“All wars are won in two ways, with one’s own army and with the help of ones’ own allies,” he said.

Other countries are also stepping up their efforts to control the disease, urging people to stay at home.

Spain, the second-worst affected country in Europe, plans to extend a state of emergency until April 11, after recording more than 1,700 deaths.

Globally, more than 14,500 people have now died from COVID-19. An estimated 98,000 of the 336,000 people who have been diagnosed with the disease across the world have recovered, according to Johns Hopkins University, which is tracking the pandemic.

Here are the latest updates:

Speculation continues over the fate of the Olympic Games, which are due to take place in Japan in July,

Japanese Prime Minister Shinzo Abe has told parliament that postponing the games may become an option if holding the event in “complete form” becomes impossible.

He said cancellation was not an option.

New Zealand has reported an additional 36 confirmed cases of coronavirus, with two of them related to community transmission its Director-General of Health Dr Ashley Bloomfield, told the media on Monday.

Shortly after the numbers were released the opposition announced it was suspending its campaign for elections that are due to take place in September.

UK scientists are to track the spread of the new coronavirus and watch for emerging mutations by using gene sequencing to analyse the strains causing thousands of COVID-19 infections across the country, the government said on Monday.

Researchers will collect data from samples from infected patients in England, Wales, Scotland and Northern Ireland, the government said in a statement.

Scientists will then map out and analyse the full genetic codes of the COVID-19 samples.

“Genomic sequencing will help us understand COVID-19 and its spread. It can also help guide treatments in the future and see the impact of interventions,” Patrick Vallance, the government’s chief scientific adviser, said in the statement.

To read all the latest updates from yesterday (March 22) please clikc here.