Jersey schools to reopen to all years on 22 June 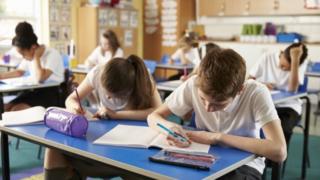 Primary and secondary schools in Jersey will reopen to all years from 22 June, the government has announced.

Pupils in Years 6, 10 and 12 joined the children of critical workers and vulnerable children on 8 June.

Schools will reopen in a “staggered approach”, and students will attend on “specified days”, the Education Minister said.

Primary school children will not have to physically distance, but older years will have to keep 1m (3ft 3in) apart.

Schools in Jersey closed on 20 March in response to the coronavirus pandemic.

Senator Tracey Vallois said the aim was for all primary school children to be back in school full-time by the end of June.

Head teachers will be responsible for deciding the order and frequency of each year group’s return, and must communicate these plans to parents, the government said.

Under the new arrangements, primary school children will no longer “bubble” in small groups, but of those in class size.

This decision was based on evidence from the island’s Scientific and Technical Advisory Cell (STAC), that suggested children were “not so-called ‘super spreaders'” and the risk of transmission from children was low.

However, secondary school pupils will need to observe “a narrower, 1m physical distance.”

The government has recommended students who are in “transition”, including Years 9 to 12, should be the first to return.

Senator Tracey Vallois said: “The clear and welcome message from STAC is that children, education and wider wellbeing must come first and that an extended absence from school will only lead to negative effects on mental health of both children and parents.