The US President’s recent successes have aimed to guarantee care for veterans, set the groundwork for reducing American inflation, and take steps towards establishing a green economy. Policies included in those bills should realise many of the goals Mr Biden set out in his campaign, and Democrats will have anticipated moods to change amongst the party’s voter base, which has expressed frustration at the lack of progress since 2021. Polling shows that approval is gradually sneaking up, giving the Biden administration its most significant boost in months.

The latest figures from US-based polling aggregator FiveThirtyEight found that Mr Biden has tacked on two points to his approval rating.

Analysts compared hundreds of polls and found that his rate is recovering and is now at its highest since July 23.

A surge in support lifted him from 37.7 percent on July 25 to 39.5 percent on July 28, prompted by anticipation that Democrats would enshrine protection for same-sex marriage and introduce legislation on prescription drug prices.

After plateauing briefly around 39 percent, August 1 to 11 saw Mr Biden buoyed a further point, bringing him to 40 percent approval. 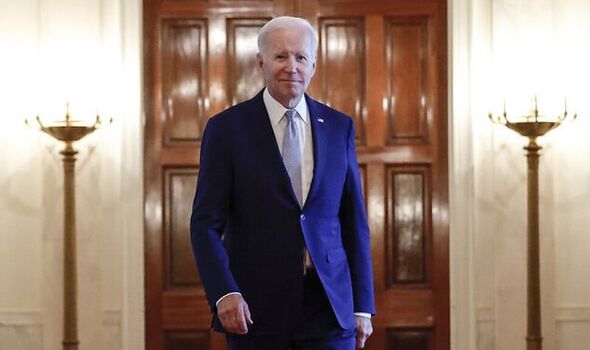 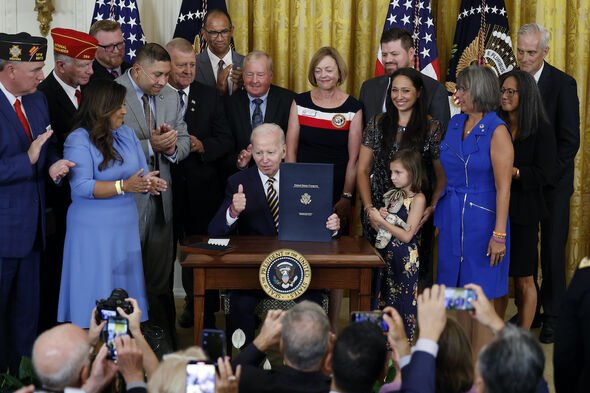 The former bill, which the Senate passed on August 3, extends healthcare and benefits for veterans exposed to “burn pit” toxins.

The PACT act had garnered national attention after Republicans were pictured celebrating blocking its passage in late July, forcing the party to acquiesce in a public defeat earlier this month. 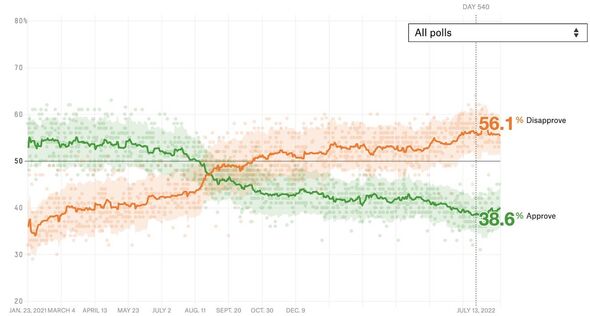 The Inflation Reduction Act promises to cut into US inflation rates, which reached a crippling 8.5 percent in July.

Provisions included in the bill build on “Bidenomics” and should generate green jobs and social investment while hedging worker power and sharing profits within communities.

Additionally, people can expect higher taxes on the wealthy, helping reduce the burden of inflation on working Americans.

These should give Mr Biden a leg-up as the country heads towards crucial midterms in November, but not enough to keep his agenda free of barriers. 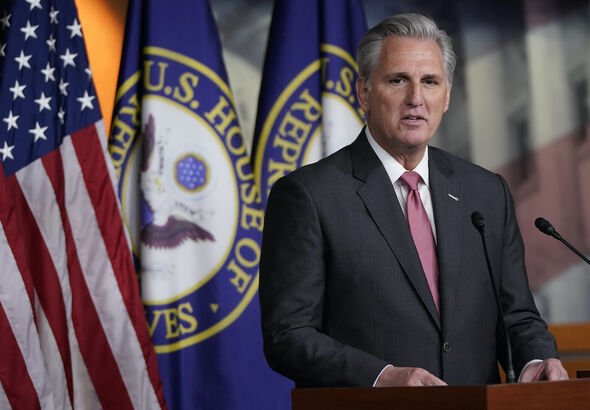 The latest forecasts for the Senate and House of Representatives suggest the Republicans will present a significant obstacle from late 2022.

FiveThirtyEight predicts that The party will add several new representatives to the lower chamber, taking 80 in 100 seats.

Should this transpire, the midterms would give Republicans 255 seats, a comfortable majority.

A loss of this magnitude would mean that Nancy Pelosi – the most powerful woman in the US – would be relegated to minority leader.

Trump loyalist Kevin McCarthy would then take her place, likely meaning that any Democrat-sponsored legislation fails to leave the house.

The Democrats have a slim chance of holding their lead in the Senate, as FiveThirtyEight predicts the party can take up to 50 seats.

Republicans would take the same number, but Vice President Kamala Harris presides over the Senate, meaning her party maintains a negligible majority.