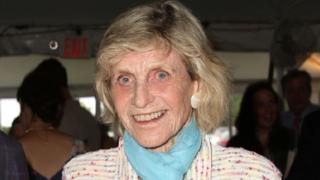 Jean Kennedy Smith, a US envoy who played a key role in Northern Ireland peace process, has died aged 92.

Her daughter Kym confirmed her death to the New York Times on Thursday.

A diplomat, activist and humanitarian, Ms Smith was the last-surviving child of Joseph P Kennedy and Rose Fitzgerald.

Ms Smith served as the US ambassador to Ireland in the 1990s, playing an important role in attempts to end sectarian violence in Northern Ireland.

In 2011, US President Barack Obama awarded Ms Smith the Presidential Medal of Freedom, the highest civilian honour in the country.

Ms Smith led a quiet life until she entered politics, doing philanthropy work and keeping out of the limelight her prestigious family name attracted.

Her first taste of politics came in 1960, when she campaigned across the country in support of her brother, John F Kennedy, who was running for the presidency.

But then, in 1993, Ms Smith was named ambassador to Dublin by President Bill Clinton, propelling her into frontline politics.

During her tenure, she drew criticism for urging the US State Department to grant a visa to Sinn Féin President Gerry Adams so he could visit the US in 1994.

Ms Smith’s role in bringing the Irish Republican Army (IRA) to the negotiating table was seen as an important step in ending decades of sectarian violence in Northern Ireland.

“The Irish people were willing to take me at face value, to give me the benefit of the doubt because I was a Kennedy,” Ms Smith said of her time in office in 1998. “I was a cog, really, in the machine that was moving. I was fortunate to be here to perhaps add momentum to what was happening.”

In 1945, she was asked to christen the USS Joseph P Kennedy Jr, a newly commissioned Navy destroyer named for her brother, who died during World War Two.

She published a memoir in 2016 called “The Nine of Us” in which she remarked that her childhood seemed “unexceptional”.

“It is hard for me to fully comprehend that I was growing up with brothers who eventually occupy the highest offices of our nation, including president of the United States,” she explained, referring to John and Robert.

In 1956, Jean Kennedy married Stephen E Smith, an executive in a transportation company founded by his grandfather.

Mr Smith, a New York financier who advised the Kennedy family and oversaw their fortune, died in 1990.

The couple are survived by their two daughters, Kym and Amanda, two sons, Stephen Jr and William, and six grandchildren.