Home » World News » Lebby: Why I’m rowing back from a family Christmas to board The Mothership

Lebby: Why I’m rowing back from a family Christmas to board The Mothership 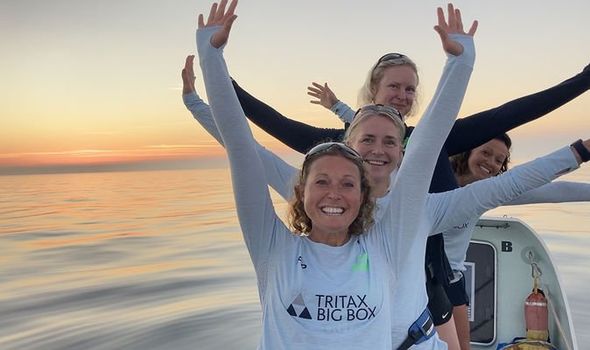 Along with my crewmates Pippa Edwards, 43, Felicity Ashley, 45, and Jo Blackshaw, 49, we’ll be wishing our families, including our 11 children, a Happy Christmas on a crackly satellite phone, before eating yet another rehydrated meal.

Just like any other day on our epic voyage, we’ll be rowing 12 hours each, two hours on, two hours off, and sleeping for 90 minutes at a time. All because we are The Mothership, one of 36 crews who are taking part in the annual Talisker Whisky Atlantic Challenge, a 3,000-mile race from La Gomera in the Canaries to Antigua in the Caribbean.

“There are easier ways to get some winter sunshine,” a friend remarked drily at my leaving party. But we’re not interested in ease – we’re taking part in this extreme race to push our boundaries, inspire women and girls, and to raise money for charities the Felix Fund, Noah’s Ark Children’s Hospice andWomen In Sport.

The race, known as the “World’s Toughest Row”, was founded by yachtsman and adventurer Sir Chay Blyth, who rowed across the Atlantic in 1966 in a 20ft open boat. It took him and partner Captain John Ridgway 92 days.

The first race, for pairs, took place in 1997, following the historical Trade Winds route from the Canaries to the Caribbean. In 2012,Atlantic Campaigns took over the running of the event and it now takes place annually, with solos, pairs, trios and fours all taking part. However, only 75 all-female crews have managed to cross an ocean to date, 229 women in total.

TV presenter Ben Fogle and Olympic rower James Cracknell rowed as a pair in the 2005-06 race, coming third in 49 days – with Ben almost losing his life when he was tipped out by a freak wave.

Our boat, Mrs Nelson, is the height of luxury compared to the one Sir Chay rowed in, with two cabins at either end, and three seats. I’m in the “brawn” cabin, in the bow, with mum of three Felicity, who works in HR for British Gas. We row, eat, sleep and repeat, while Pippa, her sister and our skipper, and Jo take charge of navigation and communication in the stern.

It’s noisier, more uncomfortable, and hotter in there, with the constant scraping of the steering mechanism guaranteed to haunt their sleep all the way across. Although most competitors focus on the physical nature of the challenge, I’m told it’s 80 percent in the mind – and one of the hardest parts is simply getting to the start line in the first place.

Mum of four Pippa, an executive coach, was inspired to sign up after watching her husband David take part in 2019/20, but has seen her crew change numerous times.

I’m the final recruit, and joined in late June after an injured rower dropped out.

One Saturday evening, when I was half-way through a bottle of wine, Jo, who I’d rowed with at Oxford, phoned to ask if I would join.

A masters (veteran) rower, I was fit, but the challenge seemed almost too overwhelming. I didn’t commit until I’d stepped on the boat. That first outing was cold, wet and grey, but I knew if I said no, it would be one of the biggest mistakes of my life. Our friends and family are broadly understanding, although it’s harder for some of the smaller children – the youngest is four – to understand Mum won’t be there on Christmas Day. I’m dealing with the sneers of my adolescent kids (I know they are secretly proud) but others are coping with tears.

Some may call us selfish, but we want to show our kids that being a mum doesn’t have to hold you back. I don’t think anyone would blink an eye if a group of fathers set off to do this.

British Gas and Tritax Big Box, a real estate fund management company, are sponsoring us, with Sweaty Betty providing our kit. But that’s not to say it’s all been plain sailing.

A few weeks ago, I had an MRI scan on a painful left knee and my GP phoned to tell me she was putting me on the Fast Track cancer pathway for sarcoma due to an abnormal area on my thigh bone.

I did what anyone might do in the circumstances – already in the pub, I got horrendously drunk – then woke up the following morning wondering if I was going to die, and not just from a bad hangover. The Mothership’s voyage was thrown into doubt. I felt terrible explaining I might have to pull out.When you’re about to row an ocean, you want to feel invincible, but I felt vulnerable and scared.

Happily, a follow-up scan confirmed it was not cancer, but an unusual patch of bone marrow. So, we are on our way, flying to La Gomera for two weeks of final preparation before departure day on December 12. It’s time to contemplate the potential horrors that await in the middle of the sea.

“You’ll either be bored or scared,” I’ve been told.Waves as tall as a terraced house, blue marlins, which can pierce a boat with their terrifying speared snouts, and fierce, freezing squalls are some of the dangers.

When we’re not catching up on sleep, spare time is spent eating.You have to put a lot of effort into consuming 5,000 calories a day, and stuffed in every corner of the boat are Hula Hoops, Kendal Mint Cake and Peanut M&Ms.

But there will be moments of intense beauty. The sunrises, sunsets and starry nights will be remarkable, and crews often return with tales of friendly dolphins.

I’m looking forward to experiencing that solitude, and the change in temperature as we approach the Caribbean, when we’ll finally start to hear birds singing again. We may not win, but we are hoping to complete the race in a respectable 40-45 days.

However, the final part of the voyage can have a sting in its tail.As theAtlantic Ocean meets the Caribbean Sea, large waves reappear. Numerous crews have capsized in those final days, and we will wear our waist harnesses until we are in the calm waters of English Harbour.

We are determined to avoid the fallouts that have dogged other teams. We want to get to the finish line in one piece, as firm friends, knowing we’ll probably have seen the worst of each other but also the best.

As the organisers say, on that first night in Antigua, we will truly know who we are.

That’s what motivates me most of all.