Home » World News » Maritime wars: Did the attack on the Mercer Street deliberately target its crew?

The attack on an Israeli-linked tanker – the Mercer Street – triggered diplomatic turmoil propelling the shadow war between Iran and Israel on the high seas back into the international spotlight.

Two people on board the ship were killed in the strike, which is thought to have involved a suicide drone.

An intelligence expert has told Sky News that the use of such a weapon could indicate they were deliberately targeted.

The British, American and Israeli governments have openly said they believe it was a “deliberate, targeted and unlawful attack” but have not suggested crew members themselves were a target.

We’ve analysed the incident to see how it differs from previous attacks and why it might have drawn such a ferocious response. 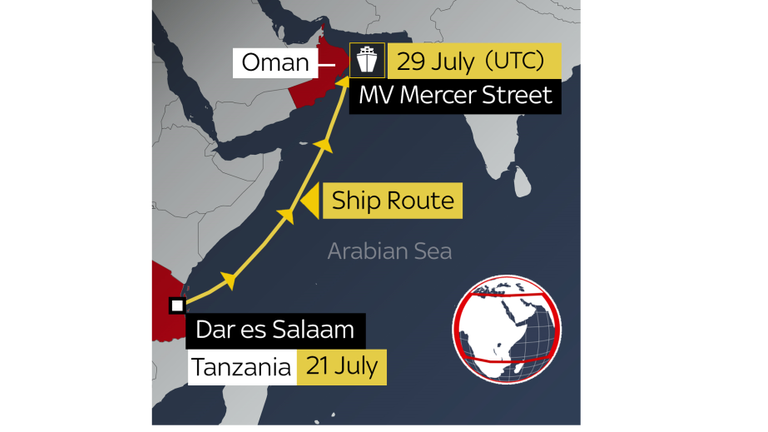 The first warning was circulated on the morning of 29 July by UK Maritime Trade Operations (UKMTO).

The UKMTO is a Royal Navy-run capability that monitors incidents at sea.

It reported that a “non-piracy” incident had occurred at 7am, approximately 86 nautical miles from Al Duqm port in Oman.

It did not explain the nature of the event, nor did it name the vessel involved.

However, shipping data provided by MarineTraffic indicate that the Mercer Street was sailing in the area at that time.

The ship’s position matches the coordinates given by UKMTO. 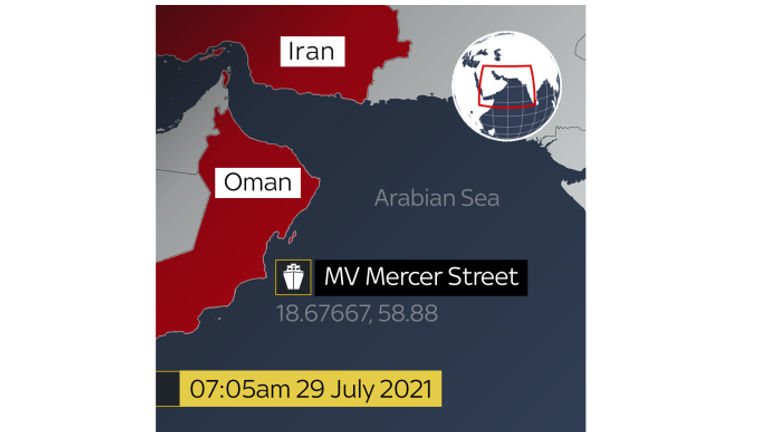 The Mercer Street, which is Japanese-owned but operated by London-based firm Zodiac Maritime, had been travelling from Dar es Salaam in Tanzania to Fujairah in the United Arab Emirates.

Shipping data show the tanker’s speed dropped slightly after 7am, before it regained pace and travelled northeast along the coast of the Omani island of Masirah.

Later that evening, UKMTO circulated a second report saying that a vessel had been attacked in waters northeast of the island.

Ships were asked to avoid the area. 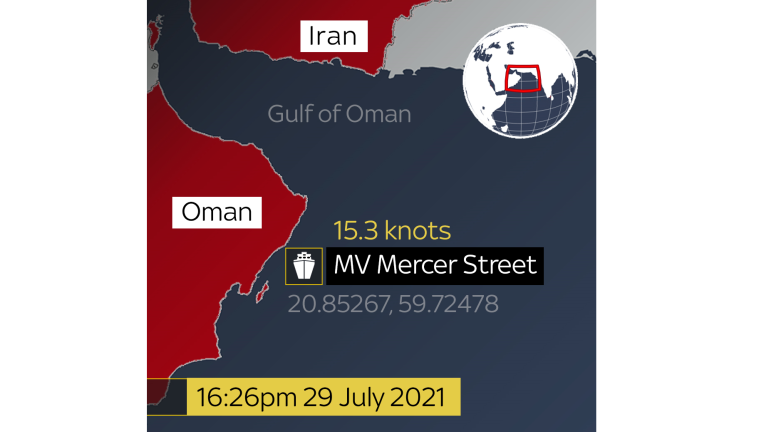 But two hours later, its speed had dropped to 3.3 knots. 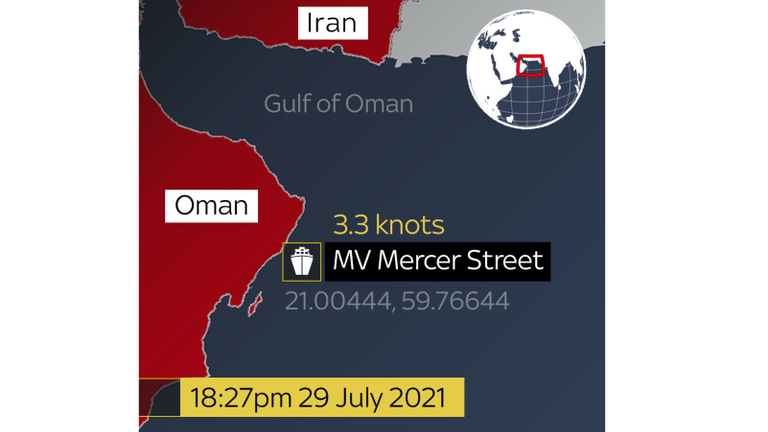 The damaged tanker remained at this slower pace after the attack, and was escorted by the American guided missile destroyer the USS Mitscher and the nuclear-powered aircraft carrier the USS Ronald Reagan until it reached Fujairah in the UAE.

Images circulating online appear to show the damage sustained by the Mercer Street.

These drones, rather than delivering a missile, often have explosives on board and are flown directly into the target. The pictures suggest the drone penetrated the roof of the bridge of the Mercer Street.

Their use is a change in approach from previous attacks against shipping targets in the Gulf, where limpet mines placed on the hull of a vessel have typically been deployed.

The drones can have a range of over 1,000km when guided by satellites, but experts believe the UAVs were likely controlled via radio signals limited to a 200km reach. The attack on the Mercer Street occurred approximately 400km from the coast of Iran.

Jeremy Binnie, a Middle East analyst at Janes, a defence intelligence provider, told Sky News: “The Iranians claim to have satellite communications on their best UAVs, but they don’t have their own satellite so they would be reliant on getting around sanctions to secure commercial bandwidth.

“The easiest solution would be for the base controllers to hand over to a forward control station, in this case on a boat, to extend the operational range of a UAV.” 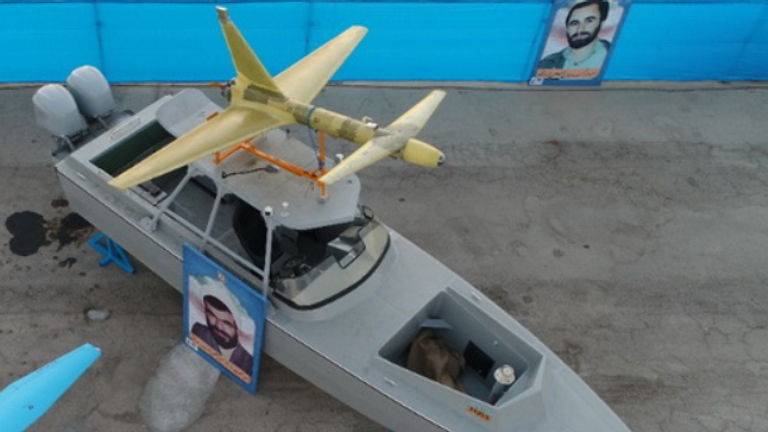 Unmanned suicide drones can be pre-programmed to hit certain coordinates, but striking a moving ship makes this impractical. It is likely that the drone was remotely piloted by a person, using an infrared camera mounted on the device for guidance.

“This raises the question as to whether the controller of the drone deliberately targeted crew members on the bridge of the Mercer Street,” added Jeremy Binnie.

It’s the first time that people have been killed in the maritime “shadow war” between Iran and Israel.

And it marks a significant escalation in the tit-for-tat struggle between the two countries that has been rumbling on under the radar since 2019.

A recent Sky News investigation tracked eight separate incidents against both Israel and Iran in 2021 and uncovered business connections between the targeted vessels.

And the incident on the Mercer Street is not the first time Zodiac Maritime appears to have been targeted in recent weeks.

On 3 July, the CSAV Tyndall was attacked by a suspected missile in the Gulf but suffered only minor damage. The boat had been previously owned and operated by Zodiac Maritime and had changed hands just months before.

It is thought Iran may have mistakenly believed the ship was still connected to the company owned by Israeli billionaire Eyal Ofer.

And on 25 March, the Lori was attacked in the Arabian Sea, a vessel owned by XT Holdings, a company partly owned by Idan Ofer, the younger brother of Eyal.

It means there have been three attacks on ships connected to the Ofer family in the past five months.

The Ofers are one of Israel’s wealthiest and most influential families. Then Israeli prime minister Benjamin Netanyahu called Sammy Ofer, who started the family business, a “true Zionist” when he died in 2011.

It’s not immediately clear why the Mercer Street and Zodiac Management were targeted.

Simon Henderson, a director at the Washington Institute for Near East Policy, told Sky News: “It is Israeli prestige which is being damaged and Israeli vulnerability which is being exposed, but no Israeli is dying.

“By targeting Israeli linked vessels in the Gulf of Oman, where there is no Israeli naval presence, Iran can expose a vulnerability and get the headlines without direct fear of retaliation.”

Mr Henderson suggested that should Israel retaliate in other regions, such as in Iran itself, it risks the international community reacting against it for fear that it will further imperil shipping in the Gulf.

The maritime war is one way Iran can respond to Israel’s efforts to undermine its nuclear programme and the regime more generally.

The death of a UK national and the response it prompted complicates things.

Mr Henderson said: “The Iranians are turning up the dial on this and they have calculated the US will not intervene, but no American has died, and we need to see where we go from here.”

The Data and Forensics team is a multi-skilled unit dedicated to providing transparent journalism from Sky News.

We gather, analyse and visualise data to tell data-driven stories. We combine traditional reporting skills with advanced analysis of satellite images, social media and other open source information. Through multimedia storytelling we aim to better explain the world while also showing how our journalism is done.