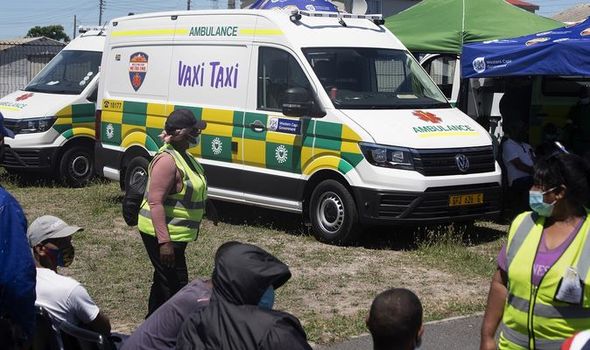 But unofficially at least 75 per cent of deaths in all new cases are down to the variant. It is also widely accepted it is responsible for more than two-thirds of all diagnoses. But experts insist the symptoms in most cases are very mild, which is reflected in a low fatality rate – just 171 recorded out of a population of 60 million over the last seven days, a daily average of just over 24 deaths.

Hospital admissions nearly tripled from 175 last Monday to 507 on Friday, but fell again to 96 on Sunday, while official figures show 86 percent of recent patients are unvaccinated. Just 30 percent of those hospitalised in recent weeks were seriously ill, less than half the share of past Delta waves, the National Institute for Communicable Diseases revealed.

It also observed that the average stay in hospital in this wave compared to the three previous ones driven by Delta was 2.8 days compared to 8 days. Willem Hanekon, director of Africa Health Research Institute, said: “Virtually everything points to [Omicron] being a milder disease but it is early days and we need to get final data.”

Dr Shabir Mahdi, of Wits University, Johannesburg, said: “The death rate is much lower at present than we observed at any stage of the pandemic – probably one tenth compared to Delta.”