Home » World News » On an empty Via Dolorosa, archbishop urges Good Friday prayer for the dying

On an empty Via Dolorosa, archbishop urges Good Friday prayer for the dying

JERUSALEM (Reuters) – On an eerie Good Friday in Jerusalem, a handful of Franciscan friars – some wearing face masks – commemorated Jesus’ crucifixion and resurrection along a Via Dolorosa in lockdown and empty of pilgrims. 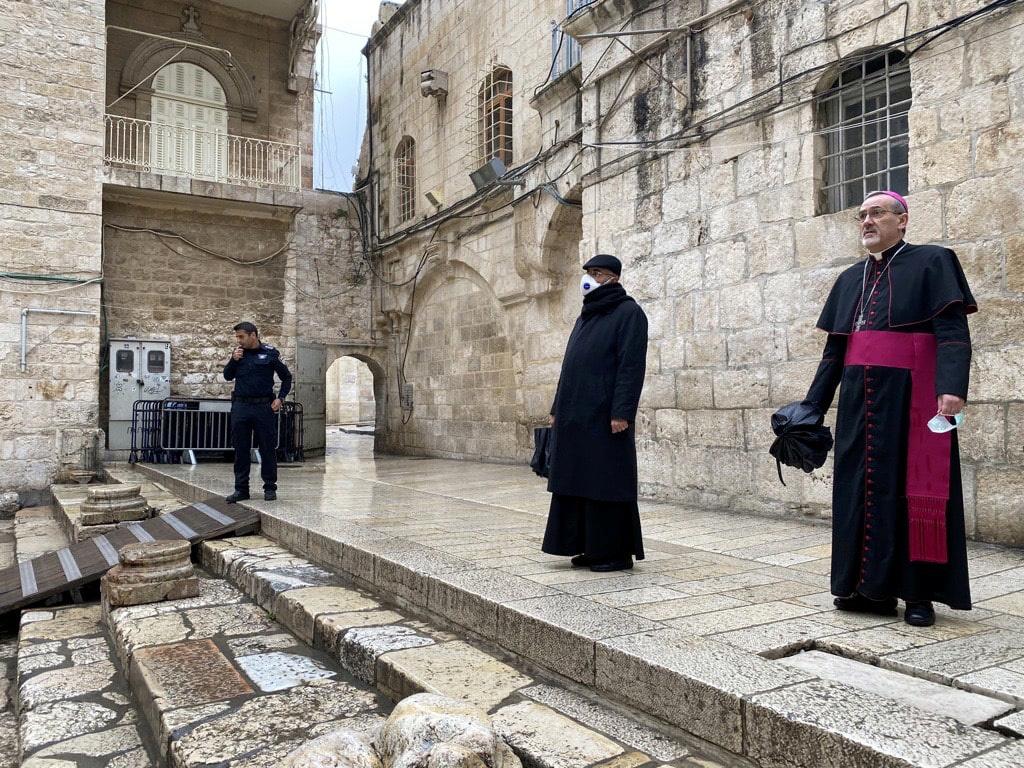 They walked the Stations of the Cross to the Church of the Holy Sepulchre, the centrepiece of Christian celebrations of Easter where, in a sparsely attended service, a call earlier went out for prayers for victims of the coronavirus.

COVID-19 has killed close to 100,000 worldwide. It has infected over 10,000 in Israel, with 92 fatalities, and there have been 266 cases and two deaths in the Palestinian territories.

“We are celebrating Good Friday, the commemoration of the death of Jesus, in very difficult circumstances,” the Latin apostolic administrator in the Holy Land, Archbishop Pierbattista Pizzaballa, said outside the church.

“So it is important in a way, in this place, where this happened, that we can …be united in the heart, in prayer, for all those who are suffering and dying.”

Holding a mask and flanked by clerics, Pizzaballa spoke to Reuters before conducting a restricted service in the ancient sandstone church revered by Christians worldwide as the site of Jesus’ final hours.

Soon afterwards, the sound of singing and prayers emerged from a window high up in the building’s wall.

Easter is the most important festival in the Christian calendar. Roman Catholics this year celebrate it on April 12 and the Greek Orthodox church a week later.

The Holy Sepulchre was closed to the public weeks ago because of Israeli restrictions on public gatherings, but was opened on Good Friday specifically for the archbishop’s service, attended by a few clerics.

The Christian denominations that share custody of the Holy Sepulchre face closures unprecedented in living memory, as do Jewish and Muslim leaders in a city that has sites sacred to all three faiths.

Passover, Easter and Ramadan all fall this month.

The four friars began their procession – a spectacle normally witnessed by huge crowds of pilgrims and tourists – down the Via Dolorosa in Jerusalem’s walled Old City shortly before noon.

The group included Father Ibrahim Faltas and Father Francesco Patton, the custodian of the Holy Land for the Roman Catholic church, who stopped and prayed at the 14 stations that mark events leading up to Jesus’ burial.

Police fined several journalists for getting too close to the procession, and dispersed a small group of Palestinian Christians who had flouted restrictions and marched their own large wooden cross through the city.

“As you can see, it’s calm,” Faltas said. “Four people doing the Via Dolorosa ritual, for the first time in history.”