Old Monongahela rye is having a comeback. A distillery road trip tells the story of its fall and rise, with Alexander Hamilton playing the villain.

After Alexander Hamilton led federal forces to quell the Whiskey Rebellion, many people in western Pennsylvania hung his portrait upside down in disrespect. Some still do, as in this display at Mingo Creek Craft Distillers.Credit…Kristian Thacker for The New York Times

BROAD FORD, Pa. — The Broad Ford distillery, or what remains of it, sits along the Youghiogheny River, about 40 miles southeast of Pittsburgh. It was once among the nation’s largest producers of rye whiskey, with its own company housing, reached by a private footbridge across the river.

But Broad Ford shut down in 1951, and now it lies derelict, its blond brick veneer collapsing, its interiors waterlogged and bedecked with graffiti.

“This is what’s left of the greatest rye whiskey distillery ever operating in the United States, as far as I’m concerned,” said Sam Komlenic, an expert in Pennsylvania’s distilling history who takes the occasional visitor on unofficial tours around the ruins.

Broad Ford made a style of whiskey unique to Pennsylvania called Old Monongahela, which employed a mash bill, or recipe, of rye, barley and, unlike almost all other whiskey made in America, not a single kernel of corn. Like Broad Ford, the style had its glory days — Herman Melville name-checks it in “Moby-Dick” — only to all but vanish after Prohibition.

But as the number of distilleries across the country grows — there are more than 2,000, up from just a few dozen 20 years ago — so does interest in reviving forgotten styles, chief among them Old Monongahela.

Today nearly 50 distilleries are operating in Pennsylvania, concentrated around Philadelphia and Pittsburgh. Many of them make and serve rye whiskey, and several could easily fit into a weekend trip across the state, starting near Philadelphia. 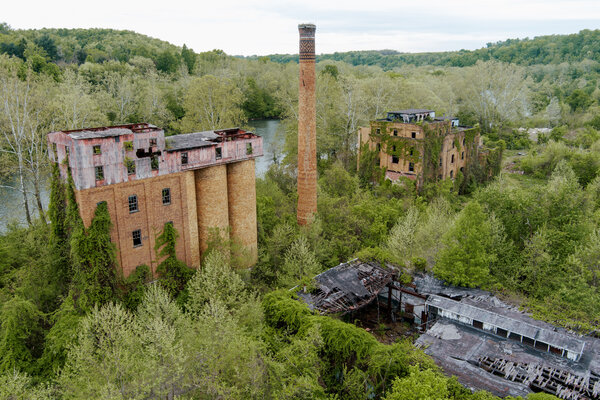 Rye whiskey, including Old Monongahela, reached its peak of production during the cocktail craze of the early 20th century, when it provided the backbone for many of the era’s most popular drinks.

“If you look at the old recipes for the classic cocktails — you know, manhattans, old-fashioneds, Sazeracs — they would often call for rye whiskey,” said Herman Mihalich, a founder of Mountain Laurel Spirits, a distillery in Bristol, a suburb northeast of Philadelphia, that makes a line of rye called Dad’s Hat.

When it opened in 2010, Mountain Laurel was the first major Pennsylvania distillery in operation in 20 years. The new venture was as much about reclaiming the state’s past as it was about charting a future: Mr. Mihalich was inspired by his childhood, living above his family’s bar in Monessen, near Pittsburgh.

Dad’s Hat uses a classic Old Monongahela recipe of rye and barley, but Mr. Mihalich and his partner, John S. Cooper, give some of their whiskey a modern twist by letting the aged rye sit in barrels that once held sweet vermouth or port, adding a layer of silky, fruity complexity.

Another distillery, New Liberty, northeast of downtown Philadelphia, does something similar with a whiskey it calls Fortunato’s Fate, which, somewhat like the victim in Edgar Allan Poe’s story “The Cask of Amontillado,” spends time in barrels that once held sherry.

“I was taking some inspiration from the past, but I didn’t want it to be a perfect repeat either,” said Robert Cassell, a founder.

About 90 minutes west of Philadelphia, in the small town of Lititz, is the Stoll & Wolfe Distillery. One of its founders, Dick Stoll, was the last manager at Michter’s, a distillery a few miles north that shut down in 1990. (In 1996, a New York-based company acquired Michter’s abandoned trademark and rebooted it in Kentucky.)

Mr. Stoll was widely considered among the best distillers in America, but after Michter’s closed he was so desperate for work that he ended up on a road construction crew. He never thought he’d go back to distilling, but in 2012 he met Eric Wolfe, who as a child lived near the Michter’s distillery, though he had only recently learned about the state’s whiskey history.

“Growing up, you didn’t know that there was a whiskey tradition at all,” Mr. Wolfe said.

Stoll & Wolfe, which the two men founded in 2017, stands largely alone among Pennsylvania rye distillers in its use of corn in its recipe — a nod, Mr. Wolfe said, to the bountiful cornfields spread around Lititz. The distillery buys most of its grain locally, from farmers who use traditional, sometimes human- or animal-powered machinery to harvest.

The area around Lititz was the jumping-off point for 18th-century settlers heading west over the Appalachians. Many packed barrels of whiskey, or the stills to make it, into their Conestoga wagons. With hard currency scarce, whiskey often took the place of money.

“Once you went west or south, currency was pretty much useless, especially during the Revolution,” Mr. Wolfe said. “If they had Maryland dollars or Massachusetts dollars, good luck spending it anywhere else.”

Those early settlers, including a man named Philip Wigle, eventually found themselves in conflict with the new federal government, then based in Philadelphia. To pay the debts of the Revolutionary War, President George Washington and his Treasury secretary, Alexander Hamilton, imposed a tax on whiskey, a heavy burden on frontier communities.

Wigle helped lead what came to be known as the Whiskey Rebellion, as settlers in Western Pennsylvania rose up in violent opposition to the tax. In 1794, Washington sent thousands of troops to suppress the revolt, with Hamilton at the head. The army arrested Wigle and dozens of others, and the unrest subsided, though not the enmity. For decades afterward, locals hung Hamilton’s portrait upside down as a sign of disrespect. Some still do.

“You will see it in people’s homes,” said Ellen Hough, a founder of Mingo Creek Craft Distillers, a distillery in Washington, about 25 miles south of Pittsburgh. “They say, ‘Oh yeah, we had Alex upside down all our lives.’”

Ms. Hough and her family — her husband, Jim, and their sons, Kevin and Rob — make a line of rye whiskey called Liberty Pole. It’s a textbook Old Monongahela, grassy and fruity, with an undercurrent of peppery spice.

Part of the appeal of Old Monongahela, aside from its history, is that rye grows particularly well in Western Pennsylvania, much better than in Kentucky.

When Meredith Meyer Grelli and her husband, Alex, decided to open a distillery in Pittsburgh in 2012, the region’s history and agricultural bounty led them to choose rye as a core part of their lineup — and to name their new whiskey after Philip Wigle.

“We wanted to help bring back regional flavor, or terroir, to American whiskey,” Ms. Grelli said. “And our starting point, as Pittsburghers, was to pursue first the famous Old Monongahela rye.”

Washington may have demonstrated the power of the federal government over the hinterlands, but in doing so he helped forge a regional identity, with whiskey at its core. By the early 19th century, hundreds of commercial distilleries operated in Western Pennsylvania, almost all of them making Old Monongahela.

The whiskey was unctuous and peppery. Along with a sweeter style of rye made in Maryland, Old Monongahela quickly became one of America’s dominant spirits, at a time when Kentucky whiskey was just getting started.

“Tis July’s immortal Fourth; all fountains must run wine today!” Melville wrote in 1851, in “Moby-Dick.” “Would now, it were old Orleans whiskey, or old Ohio, or unspeakable old Monongahela!”

Now, after nearly a century in oblivion, Pennsylvania rye is finally making a return — rye whiskey is among the fastest-growing spirits categories in the country.

There is now a Whiskey Rebellion Trail, a consortium of distilleries and historic sites around the Mid-Atlantic. And this fall the spirits giant Beam Suntory will release an Old Monongahela version of Old Overholt, a storied Pennsylvania whiskey brand it acquired in 1987.

Old Overholt is named after Abraham Overholt, whose family founded the huge distillery at Broad Ford but got their start at a site called West Overton, 40 miles south of Pittsburgh. Today, at a museum complex called West Overton Village, Mr. Komlenic, the whiskey expert, is helping build out a display on the history of Pennsylvania whiskey.

West Overton Village is getting into the whiskey business as well: Last year Mr. Komlenic oversaw the release of a very small batch of Old Monongahela, distilled and aged in one of the museum’s buildings. It’s spicy, earthy and herbaceous — a flavor that reflects Pennsylvania’s long distilling past, and possibly its future as well.