Philippines backtracks on termination of US military deal

President Rodrigo Duterte suspends for at least six months the termination of a 21-year-old defence pact with the US. 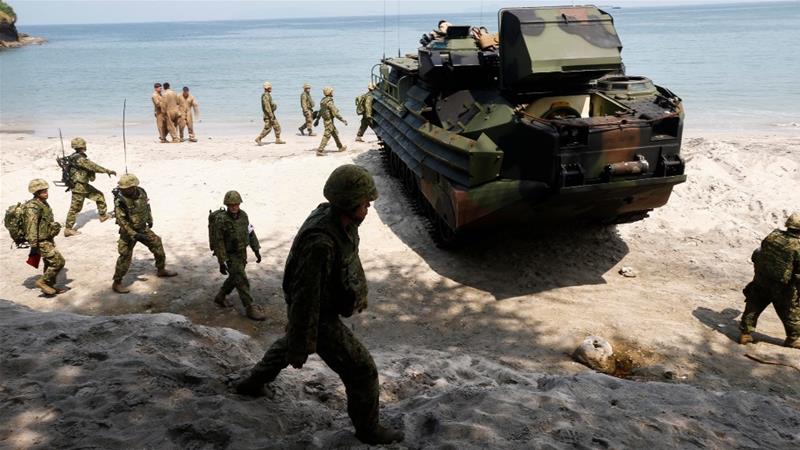 The Philippine government has said it is temporarily suspending the termination of its military pact with the United States that allows joint military exercises with US forces.

Foreign Affairs Secretary Teodoro Locsin Jr announced on Tuesday that due to the “political and other developments in the region”, the Visiting Forces Agreement (VFA) had been extended for at least six months.

Locsin wrote on social media that the suspension was made upon Philippine President Rodrigo Duterte’s “instruction”.

“It has been received by Washington and well at that,” he added.

“The suspension shall start on even date and shall continue for six months, which period is extendible by the Philippines for another six months,” after which the countdown to termination “shall resume”, read a June 1 letter by Locsis to the embassy of the US in Manila.

In a statement on Tuesday, the US embassy said it welcomed the Philippine government’s decision.

“Our long-standing alliance has benefited both countries, and we look forward to continued close security and defence cooperation with the Philippines,” it added.

Signed in 1999, the agreement between the two countries provides a framework for the temporary entry of US troops to the Philippines for joint training exercises with Filipino forces.

The pact can be terminated through written notice from either party, which would take effect in 180 days after the notice is served. The Philippines issued the notice of suspension in February and the termination would have taken effect in August.

Locsin did not elaborate on the reason behind Duterte’s latest move. But in recent months, China has stepped up its activities in the disputed South China Sea, part of which is claimed by the Philippines.

According to the US, China has also “continued to deploy maritime militia around the Spratly Islands”, which is also being contested by the Philippines and other neighbouring Southeast Asian countries.

Beijing has said it has the right to build in waters where it exercises sovereignty and has ignored and continued to defy an historic 2016 decision by an international tribunal that invalidated China’s claims of the entire South China Sea – one of the world’s busiest shipping lanes.