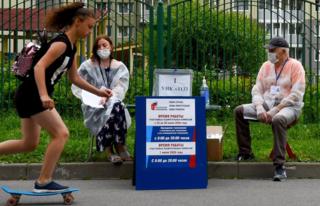 All week, millions of Russians have been voting to reform their constitution, many using polling stations set up on tree stumps, park benches and even car boots.

Giant prize draws have helped entice them to the ballot, with the chance of winning everything from shopping vouchers to a car or flat.

Opposition figures have dismissed the whole process as a farce, stretched over a week with no proper monitoring or independent scrutiny.

But for the Kremlin the amendments are vital. The vote will clear the way for Vladimir Putin to stay in power up to 2036, if he chooses.

Not that the president mentioned that in his address to the nation ahead of the final day of voting.

“We are voting for the country we want to live in… and which we want to hand down to our children,” Mr Putin declared, standing beneath a giant, ghostly new statue of a Soviet soldier, to underline the “patriotic” theme that runs through this process.

The biggest overhaul of the constitution since 1993, this vote is partly about setting down Vladimir Putin’s vision of Russia: spelling out the values and priorities he has established during two decades in the Kremlin.

“Putin can’t just say to himself, ‘I need to do everything possible to stay in power!’,” argues Tatiana Stanovaya, the head of R.Politik, a political think-tank.

“People try to hide the low things they’re doing within something more grandiose and positive. So he says instead, ‘I want to create a great Russia, and stay in power too’.”

What are Russians voting on?

The new constitution includes articles promoting a patriotic education, reiterating the ban on same-sex marriage and adding explicit mention of God – all in line with the increasing cultural conservatism of Vladimir Putin’s rule.

Those “ideological” articles, alongside “social” ones like minimum wage guarantees, are the changes actively discussed on state TV and by celebrity endorsers.

By contrast, the amendments allowing Vladimir Putin to restart the clock on his presidency when his current term ends in 2024 – and so run for twice more for president – are barely mentioned.

They were left off the initial information on the vote altogether.

The amendments cover dozens of existing articles, and add several new ones. They fall broadly into three categories and many enshrine things in the constitution that are already federal law:

Banning any action aimed at the “expropriation” of Russian territory, or calls for that.

Protecting the “historical truth” of the Great Patriotic War (1941-1945) and banning any “belittling” of the feats of those who fought.

Protection of the institution of marriage as the union of a man and a woman.

Refers to Russians’ faith in God, as handed down by their ancestors.

Pensions to be index-linked.

Forming a “responsible attitude” to animals.

State Council to set “direction of domestic and foreign policy and socio-economic priorities”.

In the case of a person already holding the presidency, previous terms will not count – the so-called “zeroing” of Vladimir Putin’s terms so far.

Voters can only select one of two boxes: accepting or rejecting all of the amendments.

Lobbying for either option is officially banned, but fliers posted to Moscow apartment blocks all called on people to vote “for” the amendments, rather than “on” them.

A much smaller counter-campaign has plastered stickers with Mr Putin’s face around town urging Muscovites to say “No”.

Will the pandemic affect the vote?

A short drive from the capital, on the outskirts of Podolsk, voters were invited to a tent in a car park to make their choice.

Election officials in face visors, masks and white suits were a reminder that this nationwide vote was being held in the midst of the coronavirus pandemic.

Postponed from April, the Kremlin was keen to reschedule as soon as possible.

A poll by the independent Levada Centre in early May reported a slide in Mr Putin’s approval rating to 59% – his lowest ever. The continuing Covid-19 crisis is unlikely to improve things.

So officials have done their utmost to get people out to vote.

An election official in Omsk, Siberia, made national headlines when she won an apartment in the lucky draw. Her protest that she was “just another voter” met with a deeply sceptical response.

There were no prizes in Podolsk, but plenty of enthusiastic pensioners.

“All the amendments suit me!” Galina said, dropping her voting slip into a transparent plastic briefcase decorated with a double-headed eagle.

“The index-linking of pensions, the right to study and work and housing,” she listed as her favourites, although the latter few are not explicitly covered by this reform.

“I like the idea that marriage should only be between a man and a woman,” said Elena, selecting her top amendment.

In her thirties, she also had no problem with Vladimir Putin staying on as president. “He suits us for now,” she said.

Is there much opposition?

In the town centre, beneath a tower block decorated with Russian flags, some younger voters were scornful of the vote.

“What’s the point? Putin will stay forever in any case,” one girl flung over her shoulder.

Maxim said he and “lots of friends” had voted against.

“We’ve had one president for 20 years, and Putin could do another 16 years? I think our country needs something new,” he said.

Russia’s most prominent opposition figure, Alexei Navalny, has published a stream of posts on social media mocking the makeshift nature of the vote and highlighting irregularities.

They include pressure on some to vote and other people discovering their ballot had already been cast for them.

Influential blogger Yury Dud described the vote as “shameful”, in an Instagram post liked by more than a million people. He quoted Vladimir Putin himself in 2008 insisting that it was “absolutely unacceptable” to remain in office for life.

But the blogger hadn’t decided whether to boycott or tick the “No” box. 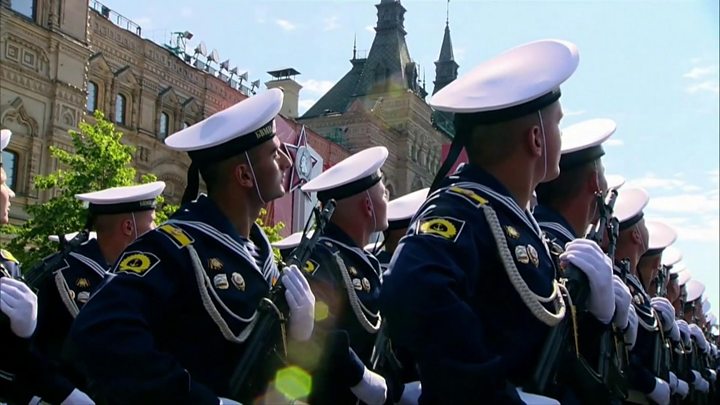 In fact, this vote is not required by law: the reforms to the constitution were approved by Russia’s parliament back in March.

But the Kremlin is said to want a high turnout and 70% support at this ballot, as a popular mandate to point to in future.

In any case, the new constitution has already been printed and is on sale in bookshops.