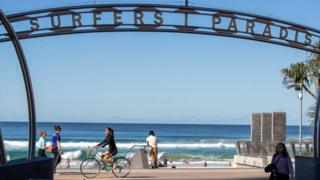 Australia’s Queensland will extend its border closure to New South Wales (NSW) and the Australian Capital Territory (ACT) to halt the spread of coronavirus from south-eastern states.

It has already shut to Victoria – the centre of Australia’s second wave – amid an outbreak in Melbourne.

Victoria reported 725 new infections on Wednesday, yet another daily record despite being four weeks into lockdown.

NSW saw many fewer – 12 – but all other states have consistently fared better.

Sydney – the NSW capital and Australia’s largest city – has been averaging about 80 infections per week, prompting concerns that community transmission could grow.

It has so far avoided returning to a second lockdown, but recently advised people to begin wearing masks.

What happened to Australia’s early success?

With about 19,500 cases in total and 232 deaths, Australia has still fared better than many countries due to effective suppression measures early in the pandemic.

But since June – when most Australians emerged from a first lockdown – the outbreak in Melbourne has spiralled.

Infections in Melbourne over the past month make up more than half of Australia’s total cases since the pandemic began.

It is suspected to have begun with breaches in hotel quarantine of infected travellers returning from overseas.

Why is Queensland worried about NSW and ACT?

Queensland has fewer than a dozen active cases.

These include several travellers from interstate who were found to have deceived authorities to avoid a 14-day quarantine – breaches which have caused anger.

Noting consistent cases in Sydney, the Queensland government last week closed its borders to residents of the city.

On Wednesday, it said the ban would widen to all of NSW as well as the ACT, a small territory which includes the nation’s capital, Canberra. The order takes effect from Saturday.

“We’ve seen that Victoria is not getting better and we’re not going to wait for New South Wales to get worse,” said Queensland Premier Annastacia Palaszczuk.

Except for a few recent cases, the ACT has been virus-free for the past few months.

But Ms Palaszczuk said the ban applied to the ACT too because some travellers to Queensland had been circumventing the Sydney ban by flying from Canberra.

How bad is it in Melbourne?

On Sunday Victorian authorities declared a “state of disaster” and enacted a night-time curfew in Melbourne.

It recorded its deadliest day yet on Wednesday – with 15 people losing their lives.

Officials stressed that the record 725 infections mostly reflected those who contracted the virus about a week ago – prior to the stricter lockdown.

“[The numbers] do jump around from day to day, but the notion of more than 700 cases is not sustainable,” said Premier Daniel Andrews. “We need to drive the numbers down.”

Western Australia, South Australia and the Northern Territory all shut their borders to the southern states last month to prevent cases coming in. Tasmania, an island state, has gone 14 days without a new case.