Ivan Konev entered Prague shortly after the German surrender in 1945, while his statue left the city on Friday. 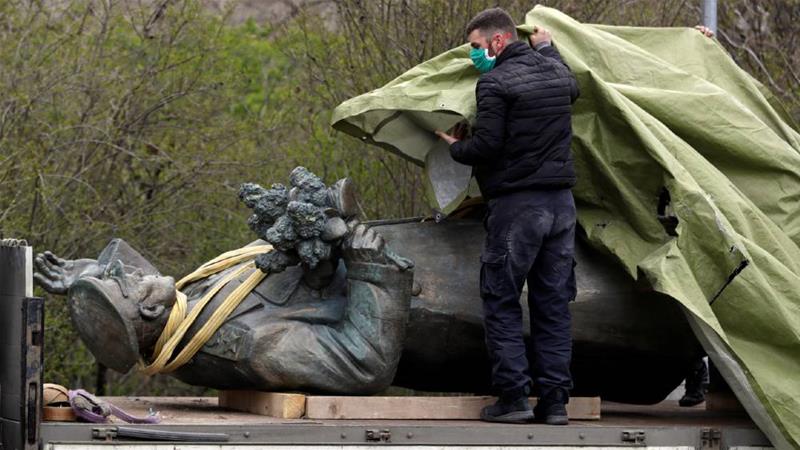 Prague, Czech Republic – Masked men attacking the Czech embassy in Moscow on Monday after a statue of a Soviet-era military commander was removed from its pedestal in Prague is just the latest in a series of interruptions of bilateral relations between Russia and the small European Union state.

The bronze statue of Marshal Ivan Konev was taken from its podium in the leafy Prague 6 district on April 3. Moscow responded with fury, and was joined in its anger by activists in both countries, as well as the outspoken populist Czech president.

In a letter, the Russian embassy accused the Czech authorities of “seeking to worsen the entire complex of Russian-Czech relations”. This “vandalism” would “not remain without an appropriate response”, it said.

“I’m not sure what they mean by an ‘appropriate response’,” Ondrej Kolar, the mayor of Prague 6, told Al Jazeera. “But I don’t think that it should include attacking our embassy.”

Kolar belongs to the centre-right Top 09 party, and led the effort to move Konev’s statue.

The Other Russia, the “nationalist bolshevik” group that claims to have carried out Monday’s embassy attack – which featured smoke bombs and saw a flag reading “Stop Fascism” attached to the building’s gates – said they were protesting the Czech authorities’ “justification of Nazism”.

The group, which issued a statement declaring: “Our tanks will be in Prague! Russia is everything, the rest is nothing!”, did not respond to Al Jazeera’s requests for comment.

The Czech foreign ministry called on Russia to prevent further attacks. “The incident occurred despite the fact that a curfew applies in Moscow,” the ministry noted in a letter. “We expect the Russian authorities to take measures to prevent such incidents from recurring.”

The monument of the Red Army general was for years a subject of controversy in Prague 6, an affluent residential quarter of the Czech capital that plays host to many embassies.

Erected in 1980, the statue honoured Konev for leading the Soviet forces credited with liberating Prague from the Nazis in 1945. However, his later involvement in suppressing the Hungarian revolution in 1956, as well as suggestions he took part in planning the 1968 invasion of Czechoslovakia by Warsaw Pact forces, meant it attracted both zealous gatherings and vandalism.

In September, Kolar and the municipal council voted to move the sculpture. The mayor said Marshall Konev should be on view again in a new Museum of Memory of the 20th Century being established by the city by next January. A “Prague Liberation Memorial” will replace the Red Army officer on Interbrigady Square.

The decision triggered violent protest from local activists last year. There was also stiff condemnation from Moscow, which in recent years has often accused other states of seeking to “rewrite history”.

Many of the countries of Central and Eastern Europe that fell under the yoke of communism following the conflict – which for Russians ran from 1941-45 and is called the Great Patriotic War – claim that Moscow is trying to wield the “politics of memory”. Poland, for instance, has furiously fought assertions from President Vladimir Putin that it was partly responsible for starting the second world war.

“World War II and the defeat of fascism is a sacred cow for the Russian authorities,” said Jiri Pehe, a political analyst who was an adviser to the first Czech president, Vaclav Havel, and is now director of the New York University in Prague.

“They know very well that the removal of the statue is a local issue, not an attempt to reinterpret history or an outbreak of fascism, but it plays well for the purposes of their propaganda.”

The statue’s removal has produced another sharp rise in abuse, he says. The Russian embassy in Prague did not respond to requests for comment for this report.

As well as trying to decipher a Russian-language barrage on Facebook, Kolar said he has been forced to confront accusations made closer to home. The Czech Communist Party (KSCM) complained that the timing of these “brutal and amoral acts” during the coronavirus lockdown was “cowardly”. The KSCM also refused to comment to Al Jazeera.

Kolar says the authorities “did not abuse the coronavirus lockdown, but did use it”. With protesters unable to gather, he says, the municipality was able to avoid conflict and potential violence.

However, the mayor’s actions have powerful opponents in his own country. The struggle over Konev is part of a bigger fight over the Czech Republic’s geopolitical stance.

President Milos Zeman is a leading critic of the statue’s removal. The controversial populist has long bid to replace Havel’s human rights-focused foreign policy legacy with a more “pragmatic” approach that favours strengthened ties with Russia and China over the EU and NATO, which is the government’s official line.

“You can tear down a statue, but you can’t erase the memory,” Zeman’s spokesman tweeted on April 3. “The president considers the abuse of the crisis situation to be morally unjustifiable,” he later told local media.

On April 6, as the foreign ministry announced the attack on the embassy in Moscow, far-right parties linked to the president were quick to blame Kolar and his centre-right party.

“Action causes a reaction,” Radim Fiala, deputy head of the far-right SPD, posted on Facebook. “It is right to condemn the actions of Russian extremists, but also the extremists from Top 09.”

Pehe said the events “are part of the domestic political struggle”:

“The liberals in power in Prague are no fans of the policies pursued by Zeman and these extremist parties.

“Such foreign policy confusion would be dealt with if the government were stronger,” he added. Yet, the government has consistently failed to maintain discipline.

The furore over Konev’s removal is just the latest in a series of controversies featuring Prague officials seeking to reiterate the Czech Republic’s Western orientation.

Earlier this year, Prague renamed the square hosting the Russian embassy to honour slain Russian opposition leader Boris Nemtsov, in a move the city’s Mayor Zdenek Hrib told Al Jazeera was “in line with the Czech tradition of respect for human rights”.

In November, Russia noted “yet another truly horrible report from Prague”, as it slammed plans by the mayor of the district of Reporyje to build a monument to the controversial Vlasov Army as the “criminal rewriting of history”.

Other parts of the political establishment have also joined in. The Czech security services (BIS) have issued increasingly urgent warnings that the threat from Russian and Chinese operations is rising.

This raises concern that Moscow could seek to strike back. After Estonia moved a Russian military statue in 2007, Tallinn reported a wave of massive cyberattacks that disrupted government and public services. In the middle of the current lockdown, Kolar admits, the Czech Republic would be highly vulnerable to any such action.