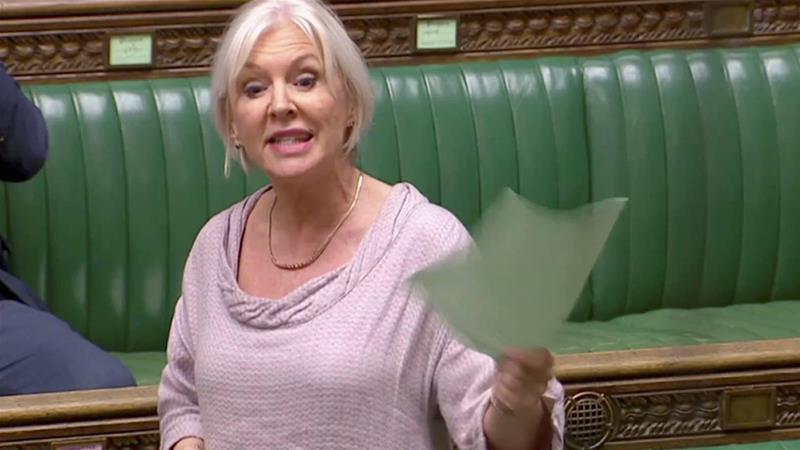 Nadine Dorries is unlikely to be fired from her role as the United Kingdom’s health minister after once again using social media to promote “fake news” that appears to hold an Islamophobic agenda, say analysts.

Dorries retweeted a video of opposition Labour leader Keir Starmer that had been doctored to make it appear that in his previous role as director of public prosecutions he was reluctant to prosecute “grooming gangs”.

The edited video made it seem as though he were blaming the young victims, saying many had consumed alcohol and hadn’t reported the abuse straight away.

It had originally been posted by a far-right account known for Islamophobia. Dorries added the word “revealing” to her retweet.

The existence of sex abuse gangs in which the abusers were Muslims has become a touchstone issue for British far-right groups, who falsely claim the gangs are representative of Muslims in the UK.

Maria Caulfield and Lucy Allan, also Conservative MPs, also retweeted the video. All three later deleted their posts, but none have yet made a public apology to Starmer or the wider public.

ICYMI: Dorries has a history sharing from the far-right & propagating Islamophobia (see thread)

Will action be taken this time?

“The actions of Nadine Dorries give credence to the view that our current government is perhaps not the bastion of the brightest and the best,” said Mark Shanahan, head of the department of international relations at the University of Reading.

“But when one sees her spreading of fake news was echoed by two further conservative MPs, it also becomes clear that [Prime Minister] Boris Johnson has rather limited options on who he can bring into government, so perhaps for now, Dorries’s place is safe,” he told Al Jazeera.

“She also provides what could be a welcome distraction for Johnson – who remains under fire for his lacklustre leadership of the UK during the pandemic. As long as the public and media are exercised by Dorries’s misguided attack on Keir Starmer, the pressure is lifted a little bit on the underperforming prime minister.”

A request for comment made to Keir Starmer’s office was not responded to by the time of publication, but a Labour Party source earlier told the PA news agency: “This is a doctored video tweeted by a far-right social media account. As a government minister, we hope Nadine Dorries acknowledges this and takes it down.”

Number 10 Downing Street, the office of the prime minister, told Al Jazeera that the three MPs had been privately reprimanded by Conservative Party officials.

“These Tweets have rightly been deleted,” a spokesman said in a statement.

“The MPs involved have been spoken to by the Whips’ Office and reminded of their responsibility to check the validity of information before they post on social media sites.”

Dorries has a record of sharing far-right disinformation, having previously claimed Muslim men could claim state welfare payments for multiple wives and implied that Mayor of London Sadiq Khan – who is a Muslim – bore responsibility for sex abuse gangs in northern England.

She has also said that Johnson did not “go far enough” in a widely-denounced newspaper column, written before he was prime minister, when he claimed Muslim women wearing hijabs “looked like letterboxes” and “bank-robbers”.

What’s revealing is that:

1. You’ve spread fake news and indulged a smear being promoted by the far right.

2. You had time to do this despite being a Minister in the Department of Health during a public health crisis.

It’s either malevolence or stupidity. Probably both. https://t.co/dT5ekmtUcn

“The Number 10 line will be to feature its reprimand of Nadine Dorries and take no further action,” Scott Lucas, professor of international politics at the University of Birmingham, told Al Jazeera.

“After all, this is not the first time that Conservative Party outlets have put out a misleading video. [The] Conservative Central Office went so far as to set up fake websites, attempting to undermine the Labour opposition, in the December general election.”

During last year’s election campaign, the Conservative Party was criticised for rebranding its Twitter account as if it were an independent fact-checker during one of the leaders’ debates, and for building a spoof website that imitated the Labour Party’s branding while being misleading over the contents of the opposition’s manifesto. It used the URL labourmanifesto.co.uk, and the party bought advertising space on Google to make sure it showed at the top of searches for Labour’s election pledges.

The party has also been accused of institutional Islamophobia, but after saying it would carry out an internal probe, plans for a full independent investigation were this week dropped.

The Conservative party did not respond to a request for comment for this report.