Salwa, the toddler who laughed at sound of bombs in viral video, is in Turkey with her parents. 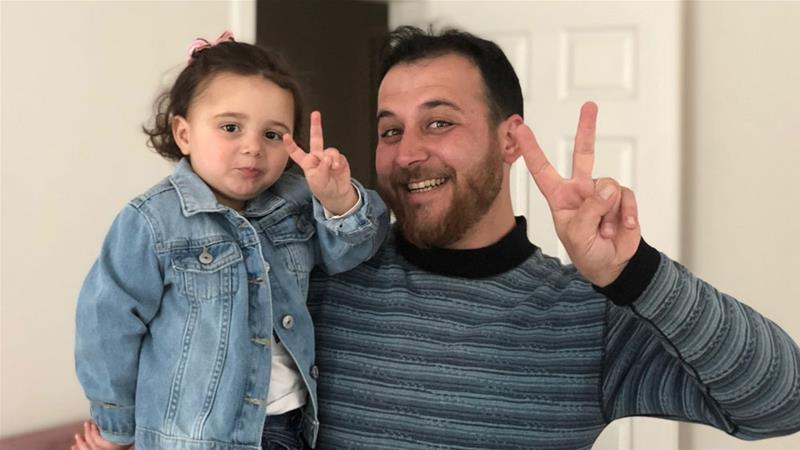 Antakya, Turkey – The floor is strewn with dolls and a miniature dinner set, with plastic grapes, cakes and eggs scattered around.

In the middle of it all, Salwa Mohammad sits on her heels, holding two plastic plates on top of each other before flipping them over.

“Here is your maqloobeh,” the three-year-old announces, referring to an upside-down dish of rice, vegetables and meat. In the corner of the room, her father, Abdullah Mohammad, laughs out loud.

“Salwa hates being famous,” said Abdullah. “She finds it too constricting. Before, she was free to play whenever she wanted to. But now, with journalists wanting to meet her, she has to dress up and be in the same room as them.”

Last month, a video of the father and daughter duo, from the city of Saraqeb in Syria’s northwestern Idlib province, went viral after Abdullah taught Salwa a game to laugh at the sound of explosions dropping near their home as a way to combat trauma.

“Is that a plane or a bomb?” Abdullah asked in the video.

“A shell. And when it falls, we will laugh,” Salwa responded.

The family is now in Antakya, in Turkey’s southern province of Hatay, after they crossed the Bab al-Hawa-Cilvegozu border crossing on February 25.

“After the video went viral, a Turkish government media representative, who spoke Arabic, got in touch with me on WhatsApp,” Abdullah explained. “He asked for me and my family’s identification papers and documents, and scheduled a day for us to cross the border.”

The family is now staying with a relative.

“Salwa doesn’t really comprehend the changes,” Abdullah said. “Moving is like a game for her. Sometimes I cannot believe it myself. I didn’t expect there to be such huge media interest in the video.”

Abdullah posted the video on his WhatsApp status and a friend shared it on Twitter where it went viral. It made Abdullah realise that the video’s appeal meant it did not need to be translated.

“It’s a universal language, where a little girl laughs at the sound of explosions to mask her fear,” he said.

“You can tell in the video where there’s a second that Salwa looks frightened, and looks at me from the corner of her eye before she continues to laugh.”

‘Live a life as normal as possible’

Death, misery, suffering, pulling a child out from under the rubble – Abdullah said none of these are considered important any more.

“If Salwa cried in the video instead of laughing, it would not have been shared widely, because that is the expected reaction.”

Sometimes Salwa asks her mother when can she go to her grandfather’s house and play with her cousins, he said. The rest of their extended family remained in Idlib.

“She also asks when she can sleep in her bed again in our house in Saraqeb. This bothers my wife and I a lot, as she gets upset when we tell her we can’t go back.” 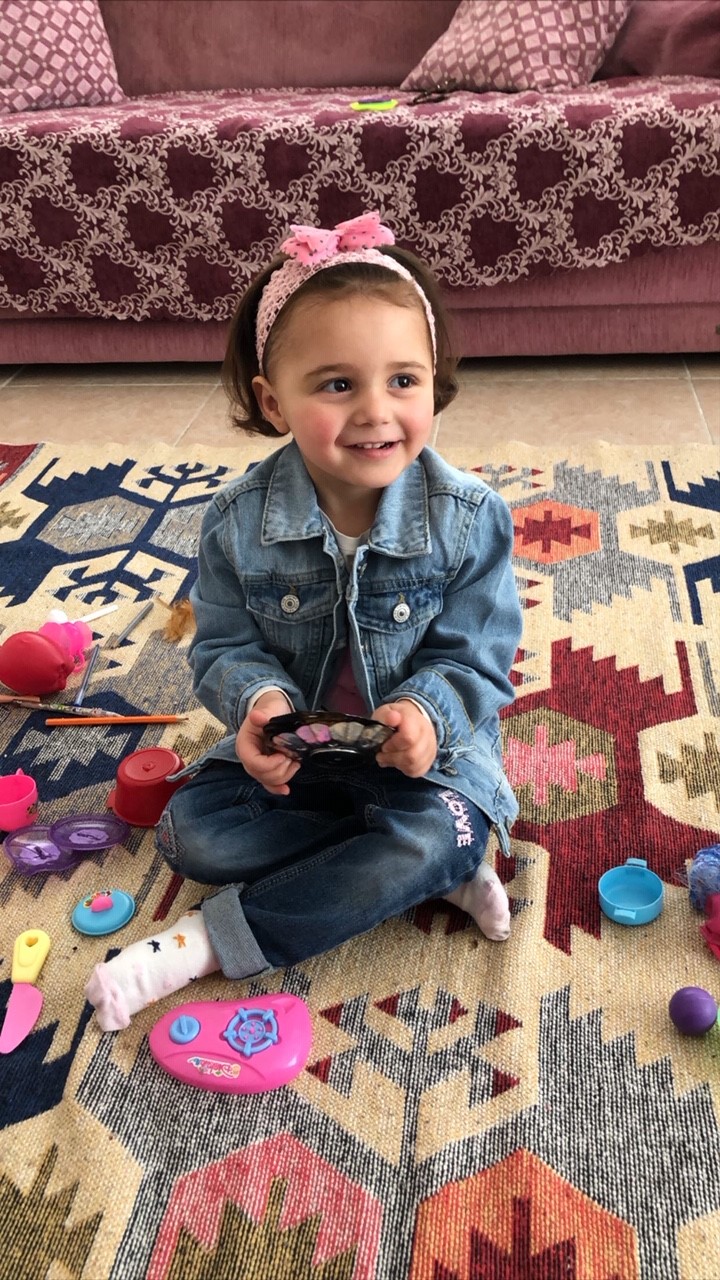 Immediately, Salwa drops her toys and says: “I want to see Roaa.”

“Roaa is her cousin,” Abdullah said. He turns to Salwa and said: “Roaa is in Syria, baba.”

Abdullah gathers Salwa in his lap.

“Roaa is in Baraa’s house. In a few days, we will go visit them. How about we talk to them on the phone? Once they get their internet back we’ll talk to Roaa, I promise.”

Abdullah’s family was forced to move from Saraqeb – which is now under the control of Syrian government forces – to Sarmada and Al Dana near the Turkish border.

“Both the regime and the rebel groups, by shooting at each other and engaging in battles, have destroyed Saraqeb,” Abdullah said. “If someone had a house there, it’s most likely gone by now. Living there is not possible now.”

If the fighting stopped now, he added, it would take at least a year for things to get close to being normal and for people to rebuild their lives.

“We have started our lives over here in Antakya,” he said. “The first thing I need to do is to find a job, but my priority is to put Salwa in a nursery so that she can have friends and start learning, and live a life as normal as possible.”

Nearly one million people have been internally displaced within Idlib, the last rebel stronghold, since the Syrian government forces, backed by Russia, intensified their military operation to retake the province last December.

The United Nations has described it as the worst humanitarian crisis in Syria’s nine-year war, and said more than 300 civilians have also been killed, including at least 100 children.

As fighting escalated between the Syrian government forces and Turkish backed opposition groups, with Turkey downing at least three Syrian planes last week, a ceasefire was finally agreed upon on Thursday between presidents Recep Tayyip Erdogan and Vladmir Putin.

“No one expected the war to go on for this long,” Abdullah sighed. “And it’s still not over yet.

“It’s no longer about removing Bashar al-Assad from power. He’s not that important. It’s obvious that he is nothing but a puppet of geopolitical interests in the country. Even if he does go, someone will replace him.

“For decades, our issue has been about the tight fist of security,” he said. “I’d go back to Syria in a heartbeat but only if everything is over. Finished,” he stressed, saying the word in English.

But for now, he is grateful for Turkey’s role in offering his daughter a safer life, one full of possibilities and hope that otherwise could not be found in Idlib.