The US is currently being pummelled by winter storms that originated just above the US-Canada border, according to US National Weather Service (NWS). President Joe Biden declared an emergency in Texas last night as temperatures dropped to deadly lows of -15C due to the violent weather. Last Thursday, icy conditions on the roads resulted in more than 100 vehicles smashing into each other in Fort Worth, killing six people and leaving many more needing hospital treatment. Texas Storm Chasers tweeted conditions were becoming “life-threatening” at 5.50am local time today.

They wrote: “There are now 2.07 million customers without power in Texas. A customer is just one person, but probably have family. This is becoming a life-threatening situation. Begin searching for local warming shelters in case power goes out/isn’t restored soon.”

WXCHARTS tweeted an image of the US under siege from the awful weather and wrote this morning: “This isn’t a chart you’ll see too often…snow and ice stretching all the way from Canada, through the US and southwards into Mexico. Absolutely incredible!

“Temperatures are plummeting well below average for the time of year, with parts of Texas seeing overnight mins ~5F (-15C).”

The latest models from WXCHARTS also show Atlantic air hitting the UK this late on Wednesday and early on Thursday as wintry conditions appear to head over in a westerly direction.

The maps show wintry conditions swirling over the Atlantic and heading for western parts of the UK. 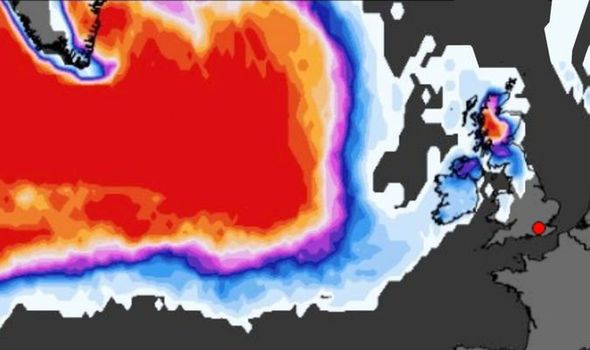 The snow probability chart turns orange in western parts of Scotland, including Ayreshire, suggesting there is between 80 to 90 percent chance of snow hitting from the Atlantic system.

Further south in Edinburgh, Scotland, the chart turns deep blue, which means there could 30 to 40 percent chance of snow on Thursday.

And western parts of England, stretching from Carlise and the Lake District in the north all the way down to Birmingham in the Midlands, show a 10 to 30 percent chance of snow hitting.

The Global Forecast System, a weather model produced by the National Centers for Environmental Prediction, predicts the worst of the weather will turn north just before it hits the UK, reducing the snow’s impact.

However, charts (seen below) from the Global Ensemble Forecast System – a model made up of 21 separate forecasts – predicts the UK taking the brunt of the severe weather on Thursday.

Brian Gaze at Weather Outlook warned of the UK being affected by an Atlantic system, although temperatures should be “much higher than in recent days”. 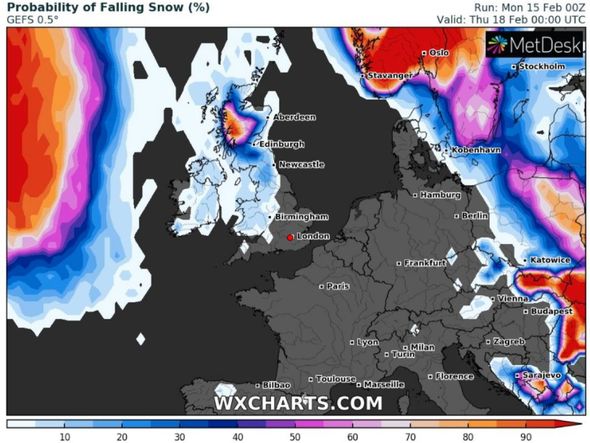 He said: “There will be a very different feel to the weather this week as the flow across the UK comes in from the Atlantic rather than the continent.

“Monday starts mixed across the UK. This morning rain in southern and central regions clears eastwards. Showery rain in the northwest becomes more persistent, but during the afternoon it begins to fade away.

“Elsewhere it will be mainly dry and a few bright spells could develop. 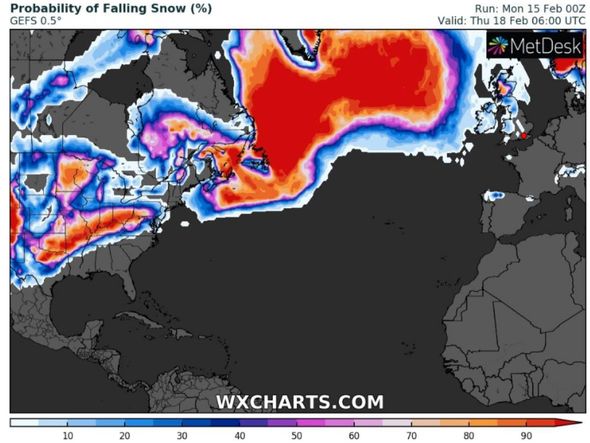 “Tonight outbreaks of rain push northeastwards across England and another area of rain extends over the west of the UK.

“The northeast stays drier. Windy, particularly in the northwest where gales are likely by the morning.”

Temperatures could plunge to sub-zero lows of -3C in Central Scotland on Thursday, according to WXCHARTS’ latest models.

England is likely to be slightly warmer on the same day, as northern regions including Manchester and Leeds could see 5C. 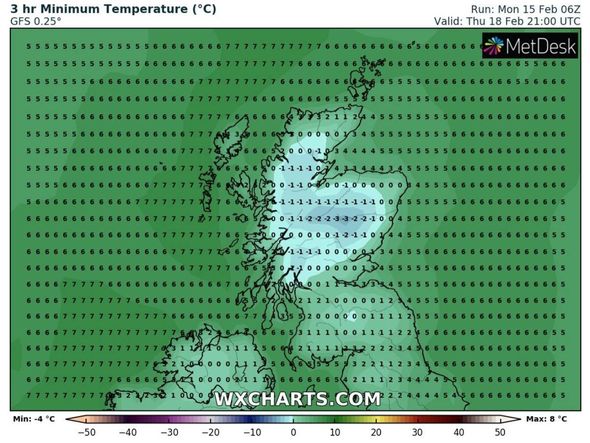 Southern parts of England could see the highest temperatures, with 7C expected in Southampton.

BBC Weather’s forecast between Saturday, February 13 and Sunday, February 21, added the UK is expected to see wet and windy weather hitting from the Atlantic.

The forecast said: “After a very cold (and in places, snowy) week across the country, this weekend will gradually bring a change to the weather that will stick around into next week.

“The main culprit of the cold in early February has been a large area of high pressure in North Europe. 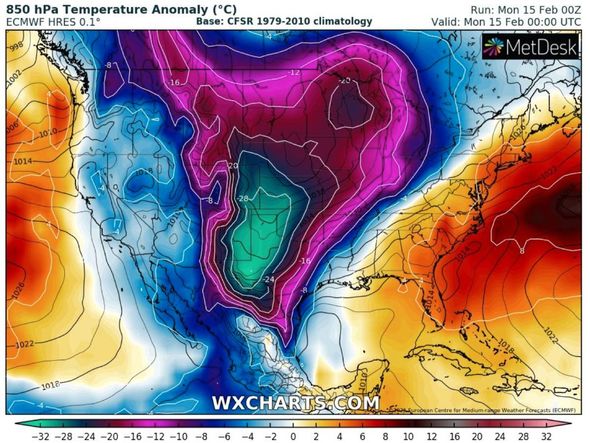 “This weekend, that high is gradually shifting into eastern Europe. The further east it goes, the less it will dominate our weather here in the UK.

“This means we will see more Atlantic weather fronts bringing windier, wetter, but also milder air from the southwest.

“Saturday will see one such front, which will bring a risk of snow and ice for northern areas as it arrives overnight into Sunday.

“These fronts will be the main feature for our weather through until Thursday at least, and a few systems, such as the one on Sunday, may be strong and bring some disruptive winds to western or northern coasts. 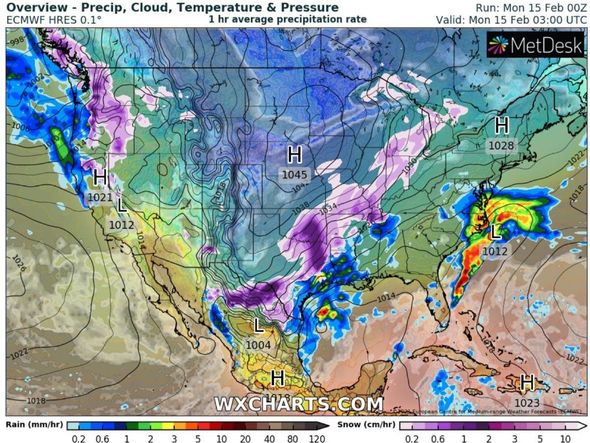 “As is typical with this type of pattern, the day-to-day specifics are subject to change, but expect things to be milder than normal, windy, and often quite wet.”

The outlook for this Wednesday to Friday said: “Remaining unsettled with bands of rain and showers moving on a brisk south-westerly wind, with brief settled interludes.

“Coastal gales in the south and northwest at times. Rather mild.”