Economist says President Salva Kiir sent hit squad to kill him or abduct him in Nairobi, an allegation denied by gov’t. 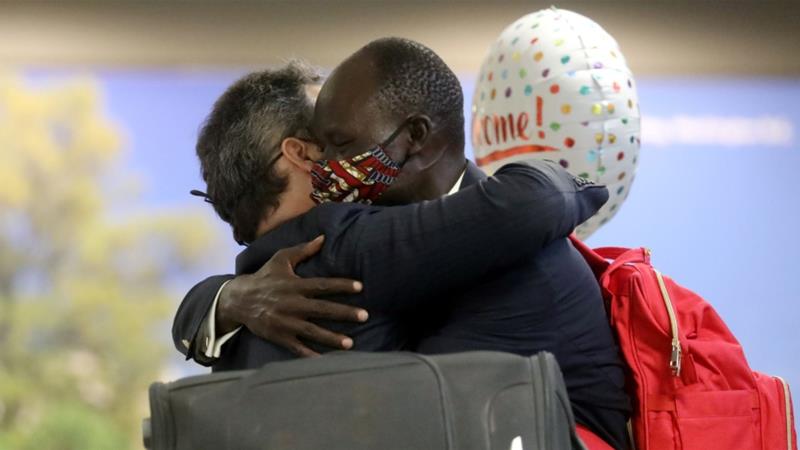 A prominent South Sudanese economist has fled to the United States, accusing South Sudan’s President Salva Kiir of ordering him killed or abducted in Kenya – an allegation flatly denied by the government in Juba.

Peter Biar Ajak landed at Dulles Airport outside Washington, DC with his wife and three small children after travelling from Nairobi. He told Reuters news agency that top South Sudanese officials whom he declined to identify had warned him that Kiir had ordered a team to abduct or murder him in the Kenyan capital.

Ajak said SUVs with South Sudanese registration plates followed him in Nairobi, where he moved in February after about 18 months in prison in South Sudan on charges he had disturbed the peace by speaking to the foreign media. He was pardoned in January.

“About five weeks ago, I received information that the president of South Sudan, Salva Kiir, had ordered the National Security Service … to either kill me in Nairobi or abduct me and bring me back to South Sudan,” Ajak told Reuters.

Asked why Kiir may have wished to have him killed or captured, Ajak said he believed South Sudan’s president felt threatened by his efforts to expose corruption and promote democracy in the country, which gained independence in 2011 and plunged to a ruinous civil war two years later.

Ajak founded the South Sudan Young Leaders Forum, a non-profit group that has published scathing criticisms of the South Sudanese leadership and has sought to rally the country’s youth to demand better governance and an end to violence.

“That is complete nonsense. He was here when he was pardoned by the president and allowed to go abroad. He should not associate anything that comes his way with the government of South Sudan,” Ateny Wek Ateny, South Sudan’s presidential press secretary, told Reuters in Juba.

“The government of South Sudan does not attempt, or even need, to kill anybody outside the country,” Ateny added.

Ajak’s representative, human rights lawyer Jared Genser, provided a photograph of a white SUV with South Sudanese plates which he said had followed Ajak in Nairobi. According to Reuters, Genser said the plates were not in South Sudan’s car registry and were typical of those used by the government’s National Security Service.

Reuters also reviewed emails from June that showed the US State Department regarded Ajak’s allegation as sufficiently credible to grant him a visa.

“The circumstances of Peter’s case are clear,” said one US official in an email.

South Sudan’s civil war began in 2013 after a political disagreement between Kiir and his deputy, Riek Machar, deteriorated into a military confrontation.

Ajak has been publicly critical of the way Kiir and Machar approached peace talks to end the civil war. He said South Sudan needed to hold elections but said it was too soon to say whether he might run.
In 2018, South Sudan ended five years of civil war that killed an estimated 400,000 people, caused a famine and created a massive refugee crisis, but Kiir and Machar’s disagreements have kept the peace process from being concluded.

In an opinion piece published in the Wall Street Journal on Thursday, Ajak accused Kiir of “cruelty” and said he had “exploited the chaos to delay elections, first from 2015 to 2018, and then to 2021. They must not be delayed again.”

While thanking President Donald Trump for giving him refuge, he also called on the US to impose additional targeted sanctions against South Sudanese officials who, he said, had committed atrocities.

The White House and the State Department did not immediately respond to requests for comment on the call for more sanctions.