The UN has deplored the death in custody of an 84-year-old Indian Christian priest who campaigned for the rights of tribal people.

Father Stan Swamy was denied bail after being arrested last year on suspicion of ties to a banned radical leftist group linked to violence in Maharashtra state in 2018, which he denied,

In a statement the UN Human Rights Watch said: “We are deeply saddened and disturbed by the death of 84-year-old Father Stan Swamy, a human rights defender and Jesuit priest. 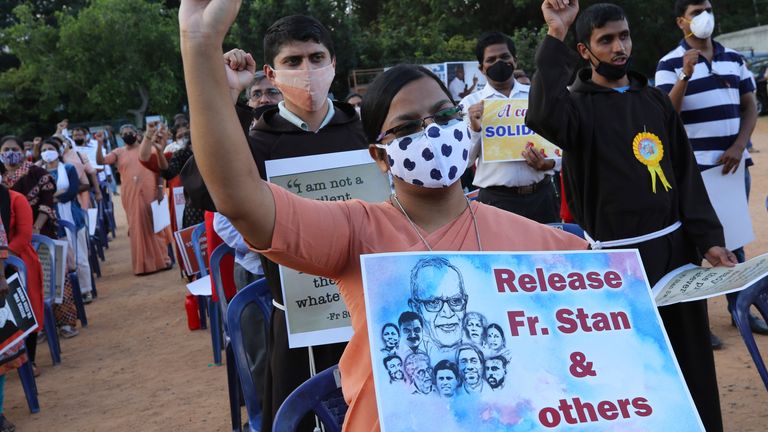 “Father Stan had been held in pre-trial detention without bail since his arrest, charged with terrorism-related offences in relation to demonstrations that date back to 2018.

“He was a long-standing activist, particularly on the rights of indigenous peoples and other marginalized groups.”

Mr Swamy, who suffered from Parkinson’s disease and also contracted COVID-19 while in prison, died in a Mumbai hospital on Monday as a hearing was taking place in court over his bail plea.

His death will revive criticism of the increasing use of an anti-terrorism statute under nationalist Prime Minister Narendra Modi’s government.

Mr Swamy was arrested under the Unlawful Activities Prevention Act (UAPA) for alleged links with the banned Communist Party of India.

He was the oldest of a dozen people, most of them academics and human rights activists, accused of violence in 2018 and imprisoned under UAPA, which allows for prolonged detention for questioning.

The priest was held in deplorable conditions, forcing his lawyers to go to court as he was denied warm clothes and a straw to help him drink.

It was only when the Bombay High Court intervened in May that he was transferred to a private hospital. He was on a ventilator when he died of cardiac arrest.

On Tuesday, India’s foreign ministry said Mr Swamy’s bail applications were rejected by courts “because of the specific nature of charges against him”. Lawyer and activist Prashant Bhushan has called his death “nothing less than murder by the state”.

She added: “Unfortunately, the judiciary is also complicit in this.”

Leaders of 10 main political opposition parties have written to Mr Modi expressing outrage at Mr Swamy’s death and demand immediate release of all the accused kept under the UAPA act.