Statue of US slavery advocate taken down in South Carolina

Officials voted unanimously to remove the statue of former US VP John C Calhoun from downtown square in Charleston. 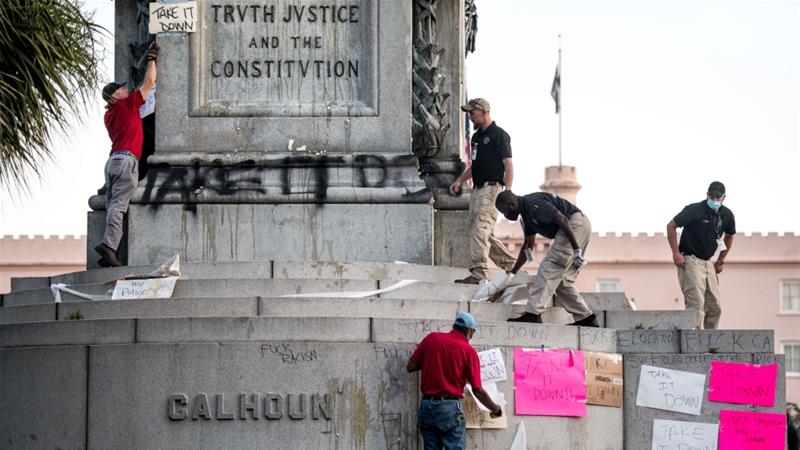 Officials voted unanimously on Tuesday to remove the statue from the downtown square, the latest in a wave of actions arising from protests against racism and police brutality against African Americans.

Another piece of equipment that appeared to have pulleys attached was raised to the height of the statue from Calhoun Street, the roadway that marks the southern border of the square where the statue sits and also bears Calhoun’s name.

John C Calhoun’s support of slavery never wavered. He said in several speeches on the US Senate floor in the 1830s that slaves in the South were better off than free Blacks in the North while calling slavery a “positive good”.

Council members approved the measure 13-0 at a late-day meeting. The resolution authorised the removal of the statue of the former US vice president and senator from South Carolina.

City officials said eventually the Calhoun statue will be placed permanently at “an appropriate site where it will be protected and preserved”.

The vote comes a week after Charleston’s mayor, John Tecklenburg, announced he would send the resolution to the city council.

“I believe that we are setting a new chapter, a more equitable chapter, in our city’s history,” Tecklenburg said, just before the vote. “We are making the right step. It’s just simply the right thing for us to do.”

Council members heard from dozens of residents for and against the statue’s removal.

Councilman Karl L Brady Jr said he knew his support of the statue’s removal may cost him votes, but he was voting his conscience in a move he said shows in Charleston, “we place white supremacy and white supremacist thought back where it belongs – on the ash heap of history”.

Last Wednesday, when Tecklenburg announced his plans to remove the statue, dozens of protesters linked arms around the monument, shouting, “Take it down!”

Video posted on Twitter also showed signs and spray-painting on the monument. Police said they made several arrests for vandalism and ultimately closed off the area overnight.

In the heart of downtown Charleston, Calhoun towers over a sprawling square that is frequented by locals and tourists alike and that is a frequent venue for festivals and large public events.

Several organisers have said recently they would no longer use the space while the statue remained.

About 40 percent of enslaved Africans brought to North America came through the port city of Charleston, which formally apologised in 2018 for its role in the slave trade.