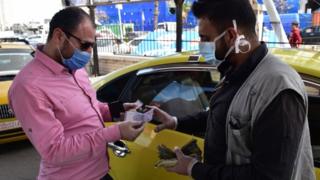 Syria’s health ministry has said a woman has died from the coronavirus disease – the war-torn country’s first officially reported fatality.

The woman died on Sunday after being taken to hospital, state media reported, without giving a location.

Nine other people tested positive for the Covid-19 respiratory illness but medics suspect there are many more.

There are fears the virus will spread rapidly through vulnerable populations, overwhelming the healthcare system.

Only 64% of public hospitals are fully functioning and there is a considerable shortage of trained staff, according to the World Health Organization.

There are also six million internally displaced people in Syria, many of whom are living in overcrowded conditions in camps with insufficient water and sanitation infrastructure.

It has imposed a night-time curfew, restricted travel between provinces, shut schools and universities, and banned gatherings at mosques and other public events.

No cases of Covid-19 have been reported in the north-western province of Idlib, which is the opposition’s last stronghold, but humanitarian organisations are particularly concerned about the situation there.

A million people have fled their homes since December to escape a government offensive, and the limited number of functioning hospitals are already struggling to treat casualties from the fighting and respond to other medical needs.

Local health authorities are preparing for an outbreak, but Médecins Sans Frontières (MSF) warned on Monday that the spread of Covid-19 could quickly become critical if additional support and measures were not in place.

The medical charity said it was providing assistance for the screening of patients at two health centres, including one at Deri Hassan camp, which hosts 164,000 people.

“We witnessed people living in the open; we also saw two or three families sharing a tent which did not protect them from the cold or the rain. There were too few tents to accommodate the new arrivals,” said Ahmed, MSF’s project team leader.