A teenager has been left fighting for their life after being knifed in a mass brawl in Greater Manchester.

The 17-year-old is in hospital and is being treated for injuries described as "life-threatening".

Witnesses told Manchester Evening News up to 20 young people had allegedly been fighting in Church Street, Bolton on Friday February 19.

Police say they were called to the area at around 9.15pm, following following reports of a "disturbance and what was believed to be a large group of people fighting".

Two large puddles of blood could reportedly be seen on Market Street, one in a bus stop and the other close to a wall.

A skip, where a knife is believed to have been discarded, has been cordoned off and images show a police officer standing guard.

As of Sunday February 20, a scene remained in place.

Greater Manchester Police have confirmed no arrests have been made and enquiries are ongoing.

Police are now appealing for witnesses, or anyone who has information about the incident, to come forward. 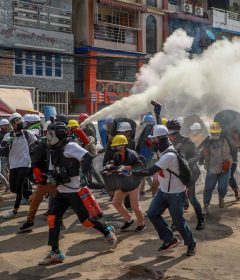