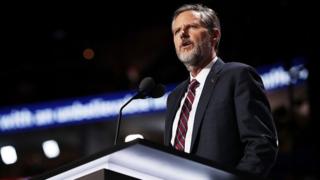 The president of one of the world’s largest evangelical Christian colleges has agreed to step aside after posting a photo of himself, trousers unzipped.

Jerry Falwell, a vocal supporter of President Donald Trump, said he would take an indefinite leave of absence from Liberty University in Virginia.

The college board did not provide a reason for the move.

Mr Falwell had conceded the Instagram photo was “weird”, but defended it as “all in good fun”.

The university said in a statement on Friday: “The Executive Committee of Liberty University’s Board of Trustees, acting on behalf of the full Board, met today and requested that Jerry Falwell, Jr take an indefinite leave of absence from his roles as President and Chancellor of Liberty University, to which he has agreed, effective immediately.”

The college has a strict code of conduct for how students must behave at the university, including barring premarital sex and the consumption of media either on or off campus “that is offensive to Liberty’s standards and traditions”, such as lewd lyrics, anti-Christian messages, sexual content and nudity.

Hairstyles and fashions are to “avoid extremes” and students are to dress modestly at all times.

The photo showed Mr Falwell with his arm around a woman who was not his wife. Her shorts also appeared to be unbuttoned. His other hand was holding a glass of dark-coloured liquid.

“More vacation shots. Lots of good friends visited us on the yacht,” the accompanying caption read. “I promise that’s just black water in my glass.”

The image provoked outrage and charges of hypocrisy from the political right and left, with Republican lawmaker Mark Waller, chairman of the powerful House Republican Caucus, calling on Mr Falwell to step down.

“Jerry Falwell Jr’s ongoing behaviour is appalling,” Mr Walker, an advisory board member at the university, wrote on Twitter. “I’m convinced Falwell should step down.”

Speaking to WLNI, a local Virginia radio station, earlier this week, Mr Falwell acknowledged the criticism and identified the woman in the photo as his wife’s assistant.

“Yeah, it was weird. She’s pregnant. She couldn’t get her pants zipped and I was like trying to like… I had on a pair of jeans I haven’t worn in a long time and couldn’t get zipped either. So, I just put my belly out like hers,” he said.

Liberty University, a private evangelical institution based in Lynchburg, was founded by Mr Falwell’s father in 1971.

Upon his father’s death in 2007, Mr Falwell was appointed as president.

Mr Falwell Jr has courted controversy throughout his tenure. In May, he tweeted a photo of a face mask decorated with one person in blackface and another in a Ku Klux Klan robe, a reference to a racism scandal that had engulfed the Democratic governor of Virginia.

A month earlier, a Liberty student filed a class-action lawsuit against the university over its handling of the coronavirus outbreak.

And last year, the former editor of the school’s student newspaper wrote an op-ed in the Washington Post newspaper, accusing Mr Falwell of silencing students and professors “who reject his pro-Trump politics”.

Mr Falwell was among the earliest evangelical supporters of the current US president, often credited for helping delivery that constituency to then-candidate Trump in 2016.