Hot weather is on the way today, with temperatures forecast to climb across the UK. Highs of 37C are expected across the south of England, with up to 38C possible in some places. The Met Office has now confirmed the next few days of weather will reach its heatwave threshold.

Met Office heatwave thresholds are reached in the UK when there will be three consecutive days where the temperatures will exceed the threshold value.

For much of the UK, this figure is 27C, with London’s at 28C, temperatures which will be far exceeded today according to the latest forecast and weather maps.

WXCharts – which gets its data from MetDesk – has maps turning black with the heat today, with much of the UK feeling the hot weather.

Netweather maps also show the heatwave kicking in, with deep red across the UK revealing the extent of the warmth.

Read More: Should you open the windows in hot weather? Top tips on staying cool 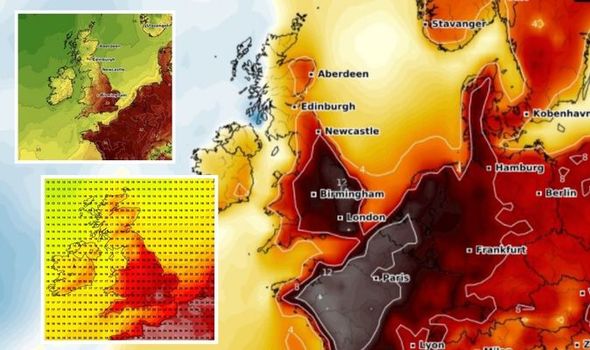 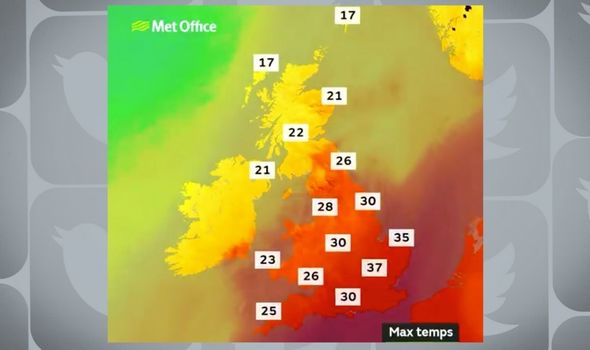 The intense heat is due to a plume of air travelling across from Africa, which could see temperatures rise to 45C in Spain.

The south is forecast to see the hottest temperatures, with high 20Cs pushing to 30C expected for the North of England, Wales and the Midlands.

Scotland could see highs of 25C, but overall will feel much cooler than the rest of the UK.

Hot and humid nights will make for an uncomfortable and sticky night’s sleep for many – with temperatures not dipping below 20C – so it may be time to grab the fan from the loft. 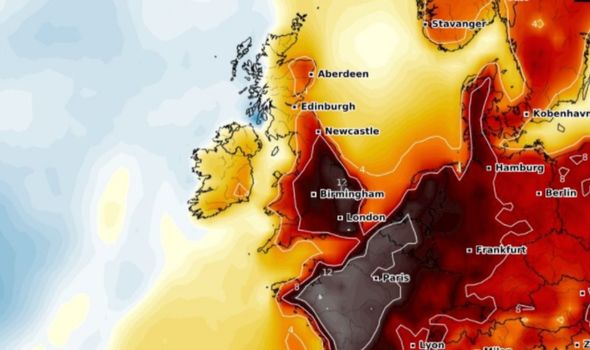 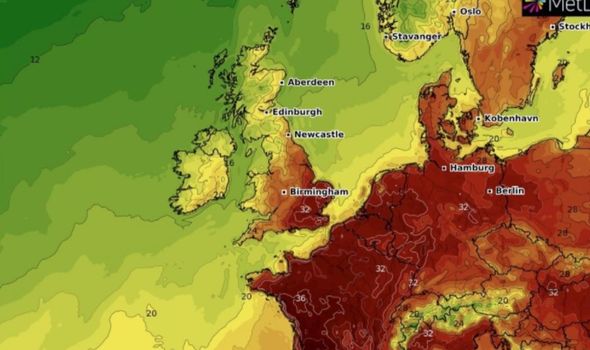 How long will this heatwave last?

Much of the hot weather will be felt today and into the weekend, with weather maps from Netweather, the Met Office and WXCharts showing hot days ahead.

The Met Office has said the heat may last for several days, meaning next week could also be a scorcher.

However, the hot air could bring thunderstorms and lightning to the UK by midweek – but it is too soon to say for certain when this could happen.

Speaking about how long the hot weather is expected to last, Deputy Chief Meteorologist, Chris Bulmer, said: “The hot air mass will remain over much of England and Wales until early next week, so we’ll continue to see maximum temperatures in the low to mid-30s Celsius as the heatwaves continues.

“It looks like the heatwave could break on Tuesday and Wednesday as the risk of thunderstorms increases for many areas, although at the moment it’s a bit too early to say for certain, so our advice is to keep up to date with Met Office forecasts day-by-day.”

Conditions will be so warm the Met Office has issued a heat health alert – with risks for the most vulnerable as temperatures soar.

The current watch level is level three – heatwave action – with a 90 percent probability of Heat-Health criteria being met between 12pm on Thursday and 9pm on Tuesday in parts of England. 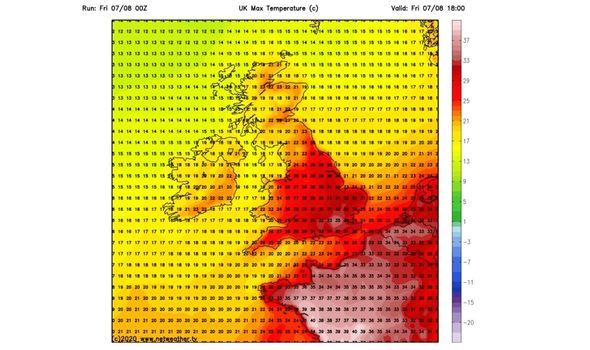 The Met Office has extended this alert, as for Southwest England, confidence in hot weather and warm nights affecting at least the far east of the region has now increased.

The warning states: “Hot or very hot conditions are likely across southern, central, and eastern parts of England from Friday as warm air spreads north from France.”

Anyone heading out into the sun is reminded to wear suncream, a hat and keep hydrated to avoid heatstroke or sunburn.

Advice from Public Health England also says: “Look out for others, especially older people, young children and babies and those with underlying health conditions.

“Close curtains on rooms that face the sun to keep indoor spaces cooler and remember it may be cooler outdoors than indoors.

“Drink plenty of fluids and avoid excess alcohol, dress appropriately for the weather and slow down when it is hot.”

A heatwave can affect anyone, but the most vulnerable people are: