July has been a turbulent month when it comes to the weather up and down the country, with mixed spells of rain and sunshine coming and going across the past few weeks. However, this looks set to change as a heatwave coming up from Europe could make the latter end of the week a scorcher.

The hottest day of 2020 so far was on May 20 when temperatures hit 28.2C at Santon Downham in Suffolk, beating the record set from the day before when St James’s Park in London recorded a high of 26.2C.

The warm weather looks set to return after a pleasant weekend in the south and cooler temperatures in the north – and the Met Office predicts this north/south divide will continue.

Weather maps show dark waves coming up from Europe and eventually hitting the south coast first around the middle of the week.

Met Office chief meteorologist Dan Suri said: “Northern Ireland and Scotland will be under a band of cloud and rain on Monday and Tuesday. 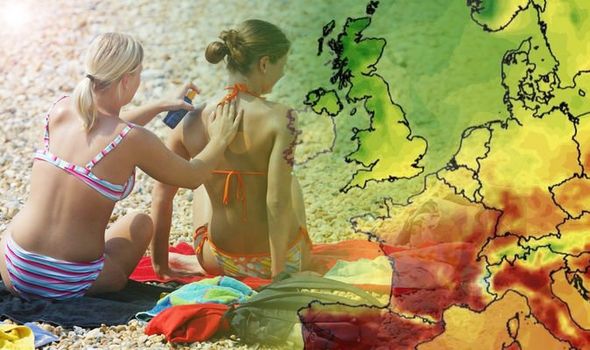 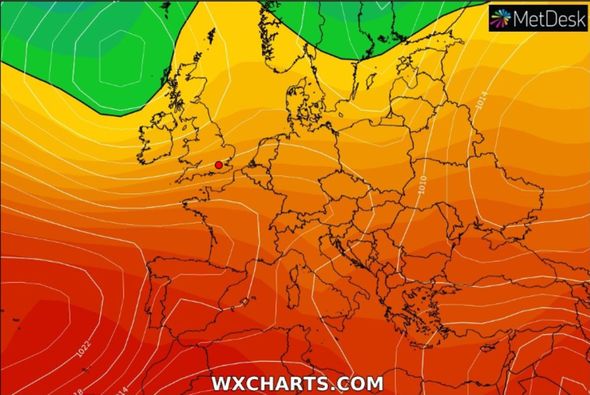 “However, it’ll be dry elsewhere with plenty of warm sunshine and temperatures reaching 28C or 29C in a few spots on Tuesday.

“Temperatures will continue to climb through the week with a hot spell developing across much of England and Wales.

“From Wednesday temperatures will widely reach into the high twenties Celsius and it’ll be hot across much of the UK, especially central and southern England where we could see highs of 30C (86F) to 34C (93.2F).

“This hot weather is expected to last until at least Friday and so heatwave conditions are likely to develop for some areas this week.” 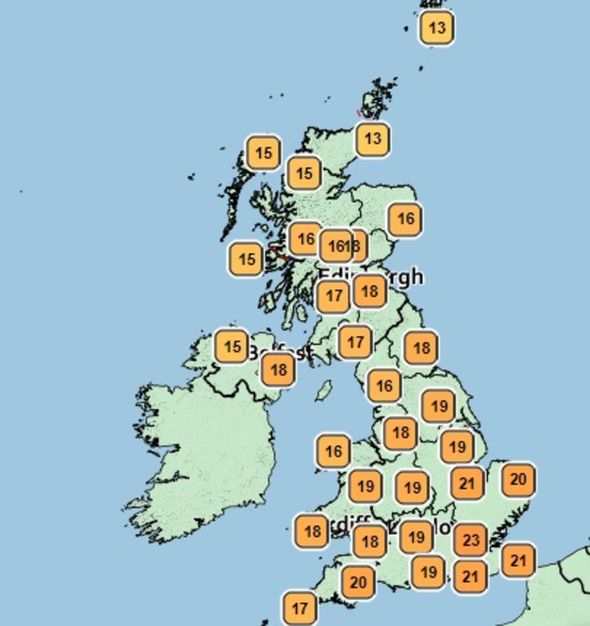 The BBC has reported hot weather across the continent which could make its way up to the UK, meaning heatwave style conditions potentially taking place later this week.

The BBC’s Louise Lear said: “It is dry and settled through much of the Mediterranean at the moment.

“It is the western Med that has got the heat, particularly across Iberia.

“High pressure is controlling things and it is quieting down in the UK down to France.”

That being said, it is likely some northern areas will see rain as a downpour makes its way over from Scandinavia.

“There is a weather front moving through Sweden and it will be effecting northern Germany and Poland.

“That will also be bringing heavy outbreaks of rain as well.”

Areas such as Madrid and Lisbon are reporting temperatures well into the 30s and some places on the coast reporting 40C,. 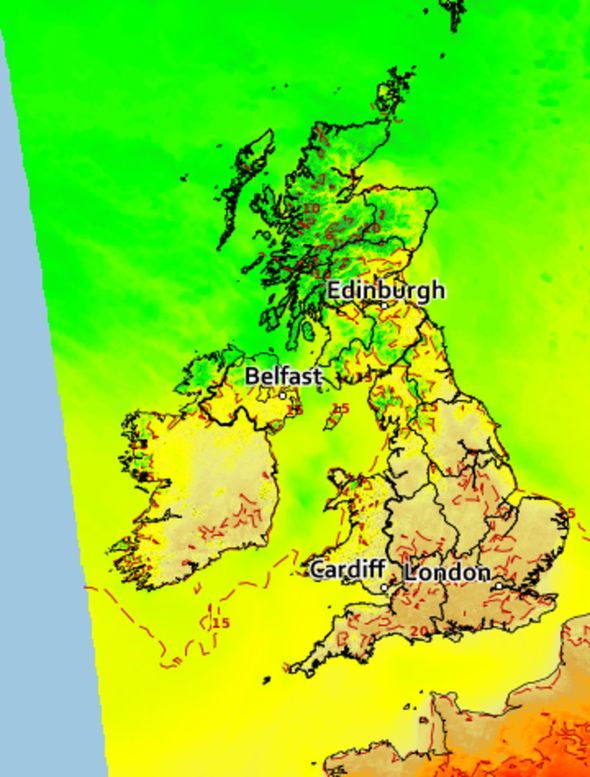 A weather map from WXCharts, which takes its data from Met Desk, revealed that highs of 44C could be felt in parts of Portugal and southern Spain at about 3pm today.

The hot air is expected to move upward through France and towards the UK.

Unfortunately the Met Office doesn’t predict the balmy temperatures will last longer than the end of this week, with a return to normal beginning over the weekend.

The Met Office outlook for the weekend and next week reads: “Bright or sunny spells across most of the UK, with a few slow-moving showers, potentially turning heavy at times.

“A cloudier start further south, with outbreaks of rain and drizzle clearing southwards throughout the day. Temperatures generally around the average, with the north staying cooler and the south possibly rather warm.

“As we head towards the coming weekend, it is likely that there will be some further outbreaks of rain and stronger winds at times towards the west, which may spread further into all parts of the UK.

“There will be periods of calmer and more settled weather during the following week, especially further south, though unseasonably wet and windy conditions will likely return frequently from the northwest.

“Temperatures around average, with any warm spells most likely in the south.”