Many of us noticed a drop in temperature this weekend due to a high-pressure weather system which brought cold air down from the north. Here are the latest weather forecasts, maps and charts for the coming week.

This weekend was a chilly one for many, with snow spotted in Surrey, East Sussex and Scotland on Sunday.

Hail showers were also spotted in parts of the South East, including Kent, Essex and the capital.

As a new week dawns, the Met Office forecast the weather will “continue to stay dry and settled”, but added the temperature will “stay cold for the time of year”. 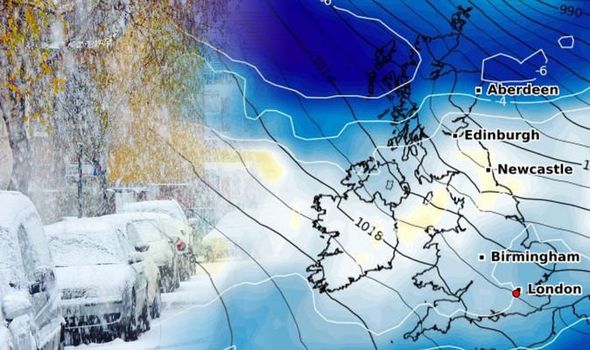 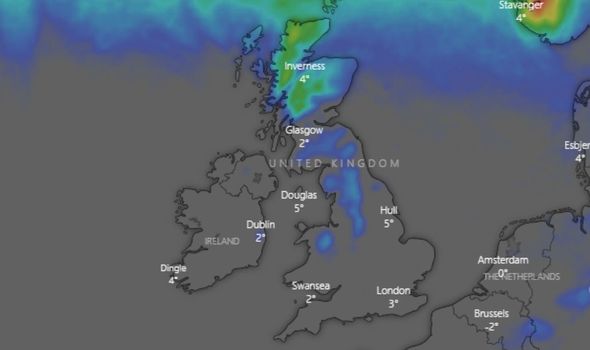 Will it snow this week?

According to Weather Outlook forecaster, Brian Gaze, some parts of the UK could see snow this upcoming weekend.

“Snow flurries were possible on Sunday in the East right down to Essex and Kent, and inland.

“-6C nights are on the cards in southern England, with -8C in Scotland, with windchill feeling bitter especially after the warmth of the past week. 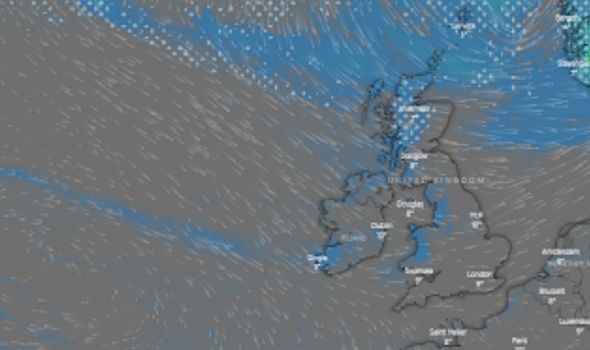 “The easterly flow eases on Wednesday in the South but cold air returns from the north from Friday.

“Next weekend has the potential for disruptive snow in northern England and Scotland on higher ground, so key workers using high-level roads should monitor the forecast.”

Netweather’s long-range forecast for March 30 to April 5 also suggests snowfall may be possible during this period.

The forecast reads: “This week will start off with a cold north-easterly flow, which will bring sunny intervals and some scattered wintry showers to much of the country, with eastern and southern areas especially likely to be affected.

BBC Weather: Snow warning as UK becomes coldest country in Europe [FORECAST]
Moss removal: How to get rid of moss in your garden [EXPLAINER]
Long-range weather forecast: How long will the sunshine last? [LONG-RANGE]

“Sleet and snow are expected to fall to low levels, but with snow cover largely restricted to high ground.

“Sunshine will be plentiful in Northern Ireland and the north and west of Scotland, where showers will be isolated.”

UK weather forecast maps from Windy show over the next 10 days some new snowfall is likely to fall over parts of the UK.

The map shows some snow in parts of northern England and Wales, but the majority of snowfall is forecast for Scotland. 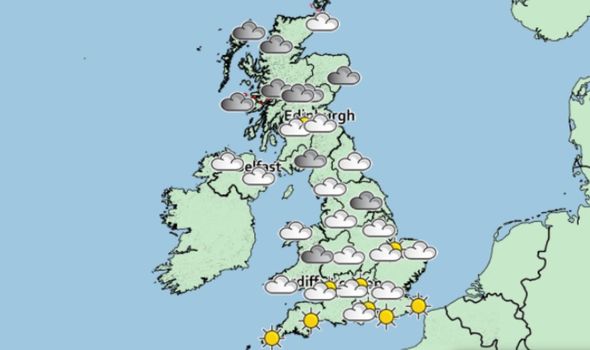 The bookies have seen a flurry of bets on the possibility of snow in the coming weeks.

Coral Bookmakers is offering 2/1 for snow to come down over the Easter weekend, and next month is 6/4 to end as the coldest ever April.

Coral’s John Hill said: “Temperatures have taken a big drop over the last couple of days and with a wintry wind to go with them, punters have been rushing in to back snow to fall in April.

“We have also seen a strong surge of bets on snow falling during the Easter weekend and for next month to be the coldest April on record in the UK.”

“A fair amount of cloud for most areas today. Some breaks at times too, mainly over western regions.

“Many areas hanging onto a fair amount of cloud.

“Evening showers will tend to become increasingly confined to northern Scotland and eastern England. Quite cold with a touch of frost.”

“A fair amount of cloud for many again, best breaks over southern UK.

Outlook for Wednesday to Friday:

“Often cloudy and rather cold elsewhere. Sunshine and blustery, wintry showers following across the far north.”